This Thought Piece has been a couple of weeks in the making and been difficult to write.  The meeting with my supervisors about the First Draft of my Thesis had left me with a clear sense that I needed to write more clearly and simply, to revisit the structure to ensure my practice is up front, and ensure the narrative is clear at the Introduction, chapter and section level.

My mind has been spinning since that meeting and I was keen to give myself time to reflect on what they had said and not follow my normal response of “doing” things, in this case substantially revising my thesis.  My natural way of reflecting is through walking and then writing.  But somehow the words would not come and I began to doubt my ability to get back on track.  I began to think about the key features of my research and what is really important.  I started to map out the narrative for each Chapter.  It is clear to me that Harman’s concept of allure is what my practice and research is about.  It is also at the centre of the Onion Diagram which is the main output of my practice (see below). 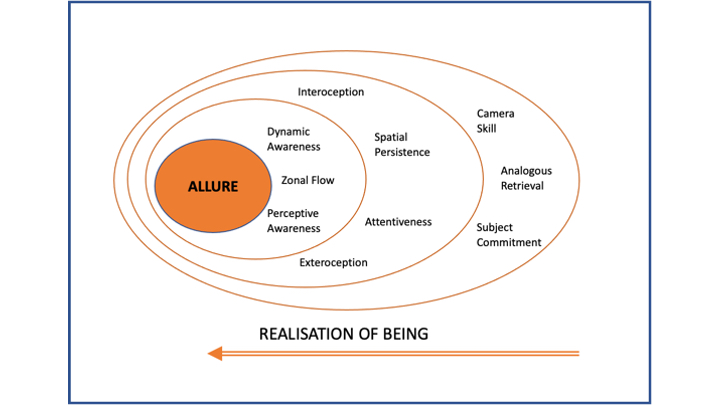 The Onion Diagram, and its ten signifiers, was developed during Year 1 of my PhD and brought together many years of practice with the artists, writers and more recently philosophers, whose artwork, writing or thinking resonated with me.  During this time, I was searching for the “more than” that Graham Harman spoke about.  I struggled for the words to describe “it”, but it became a search for essence and the ephemeral hiddenness, a momentary revelation of the “objects” or “beings” I chose to capture.  The ten signifiers, borne out of my practice, and conceived as aspects of that practice most relevant to Object-Oriented Photography, possibilise the realisation of Being, the allure, that is revealed to the photographer, at the moment of capture, and the viewer, through the resultant image.

I began my work at a small loch, Loch Cill Chriosd, on the Isle of Skye, over ten years ago.  In the early days of visiting this relatively small area of water I tried to capture its sensory beauty with traditional landscape images.  Consequently, I began my MA with a commitment to Edmund Husserl’s phenomenology, and a wish to capture my experience of the Island,  but by the end of my studies I realised that the world of sensory perception was not for me.  I was not interested in the sweeping landscapes of Skye, those that had captured the imagination of photographers and artists for centuries, rather my motivation was to develop a much deeper connection with aspects of nature, that might reveal the inner world of this captivating Island.  My practice developed with this change in direction and I began taking semi-abstract black and white images that I submitted as my MA Final Major Project on The Ephemeral Hiddenness of Skye.  Alongside this practice, I submitted a Critical Review of Practice that outlined my new found commitment to explore a philosophy termed Speculative Realism and in particular Graham Harman’s Object-Oriented Ontology.

As I began my PhD, I turned to ontology, the study of Being, and in my practice sought to capture the permanence of reality that lies below the water of the loch, the fragility of reeds or what it is like to be a lone silver birch tree perched on a rocky outcrop.   A long-standing appreciation of Claude Monet’s impressionist paintings and his tenacity in capturing the same subjects time after time, season after season and year after year shed light on my practice.  He shared a tendency to spend time in familiar places, toiling over the lily pond at Giverny, trying to capture the light and luminosity of the Normandy landscape.  In my practice, I was developing an ability to enter a non-conscious creative flow through a strong sense of dwelling in familiar and comfortable places.  Inspired by Monet,  I set about capturing the Being of another, with the enthusiasm and creative spirit of Turner, the attentiveness of Nan Shepherd, and a recognition that the phenomenology of Edmund Husserl, for all its focus on the world of perception and experience, was not for me.  And rather than painting with oils as Monet had done, to use a unique tool, the camera, to capture an impression, a momentary glimpse of the reality of this inland loch, the reeds or a lone tree.  Monet’s medium in contrast, required him to labour over a canvas over extended periods of time which had frustrated him when painting the Grainstacks series, when the light changed or waned before he was able to complete the canvas to his satisfaction.  (ref I Claude Monet film).

As I pursued this new approach to my practice, I began to realise that what I was looking for in my subjects and images was a sense of essence, that defining reality that makes Skye the special place that so many people never see.  In my view, those blinded by sensory perception have a superficial experience, and their images are the same as the many taken by previous visitors.  As I reflected on the idea of essence, I began to realise that my fifteen years of wildlife photography has also been about capturing more than the sum of the animal’s parts.  It was about capturing a glimpse of the interior world of the animal rather than a representation of  a bear, an orangutan or mountain gorilla.  Those fleeting moments where a connection is made, where the animal stares intently, or you share in a moment of contemplation.  While I am now able to reflect on my earlier wildlife photography in this way, looking back on my practice at this time, it was opportunistic and not informed by an explicit intention to understand or emulate any one of those artists mentioned above.  It was characterised by relatively short bursts of photographic activity in unfamiliar locations, in between a demanding career.  However, I was clear about finding that inner soul or personality that many do not see or capture.  In order to do this, I realised that I needed to spend time, lots of time, gaining the familiarity of place or subject, such that it was familiar, comfortable, and a place where Being might manifest itself to those that watch, wait and dwell in a space.

In April 2022, I wrote about how Monet’s commitment to specific subjects, such as Grainstacks (1888-1891) more commonly referred to as Haystacks  and The Water Lilies (1840-1926) was inspiring to me but in that post did not specifically refer to the development of the Onion Diagram, my own conception, and in particular the signifiers of “Subject Commitment” and “Spatial Persistence” that apply to Monet’s artistic practice.  Furthermore, I was not able to put into words at that time, how I might recognise Harman’s “allure” in my own work or that of others.

Having received the feedback from my supervisors on the First Draft of my Thesis, I realise that I need to be more meticulous and forensic in the selection of those artists most relevant to my photographic work and identify how in particular, they have inspired or informed the development of my practice.  While it is true that Monet displayed a commitment to subjects and locations in water lilies or the countryside around his home in Giverny, his real influence on me was in his ability to capture changing light, seasons, and weather conditions in the Grainstacks and the depth and luminosity in the water of the lily pond at his home in Normandy.

This realisation led me to think about what came first the chicken or the egg in terms of my practice and research?  Over time I have been curious and affected by the work or thinking of others apart from Monet, including J M W Turner, Nan Shepherd, Jacques Derrida, Martin Heidegger, and Graham Harman.  My thesis combines a life-long passion for photography including wildlife and nature genres, with a period of trans-disciplinary learning, reflection, and experience over decades.  My practice and lifeworld are interlinked and while my research is undoubtedly practice-led, I come at my work with the burden of age and intensive prior experience which can never be context-free.  The PhD has involved me in a process of reflection on my practice, where insights have come not only from current disciplines but also from my own lifeworld.  Discovery, therefore, has necessarily been a mixture (an assemblage, as Jane Bennett might say) of what appear like fragments of a dream, with interludes of the excitement of new discovery in the field.   Sifting one from the other is a significant challenge.

My name is Alison Price and for the past ten years I have travelled the world photographing wildlife, including Alaska, Antarctica, Borneo, Botswana, the Canadian Arctic, Kenya, Rwanda, South Africa, Zambia and Zimbabwe.
← Supervision Meeting 29 (13 September 2022) Thought Piece 31 - Reflections on Allure →