The recent meeting with my supervisors is continuing to provide me with food for thought.  I am beginning to recognise that while I thought the narrative of the First Draft of my Thesis was clear, I now realise that while some of the concepts, connections and conclusions might have been well articulated, there is much that needs better articulation and attention.  One such area is Object-Oriented Ontology and what from this aptly named New Theory of Everything is most important and most relevant to my practice.  How does Harman’s concept of essence work in photographic practice and why it is that allure, a lesser-known term, is ultimately more appropriate to Object-Oriented Photography.  Furthermore, how does allure figure in the work of artists, writers and photographers that for me manifest allure?

Imagine a world where all objects are considered equally worthy of our attention, whether human or non-human (your friend or a plant in the garden), large or small (an atom or the universe), whether real or imaginary (a lone tree or the fairies that inhabit the glens of Scotland).  A world where objects are made up of “real” and “sensory” properties and are not simply the sum of their parts. A world where the combination of the Real Object with Real Qualities and the Sensual Object with Sensual Qualities illicit a matrix of combinations that reveal the Kantian constructs of time and space and Graham Harman’s terms of eidos and essence. 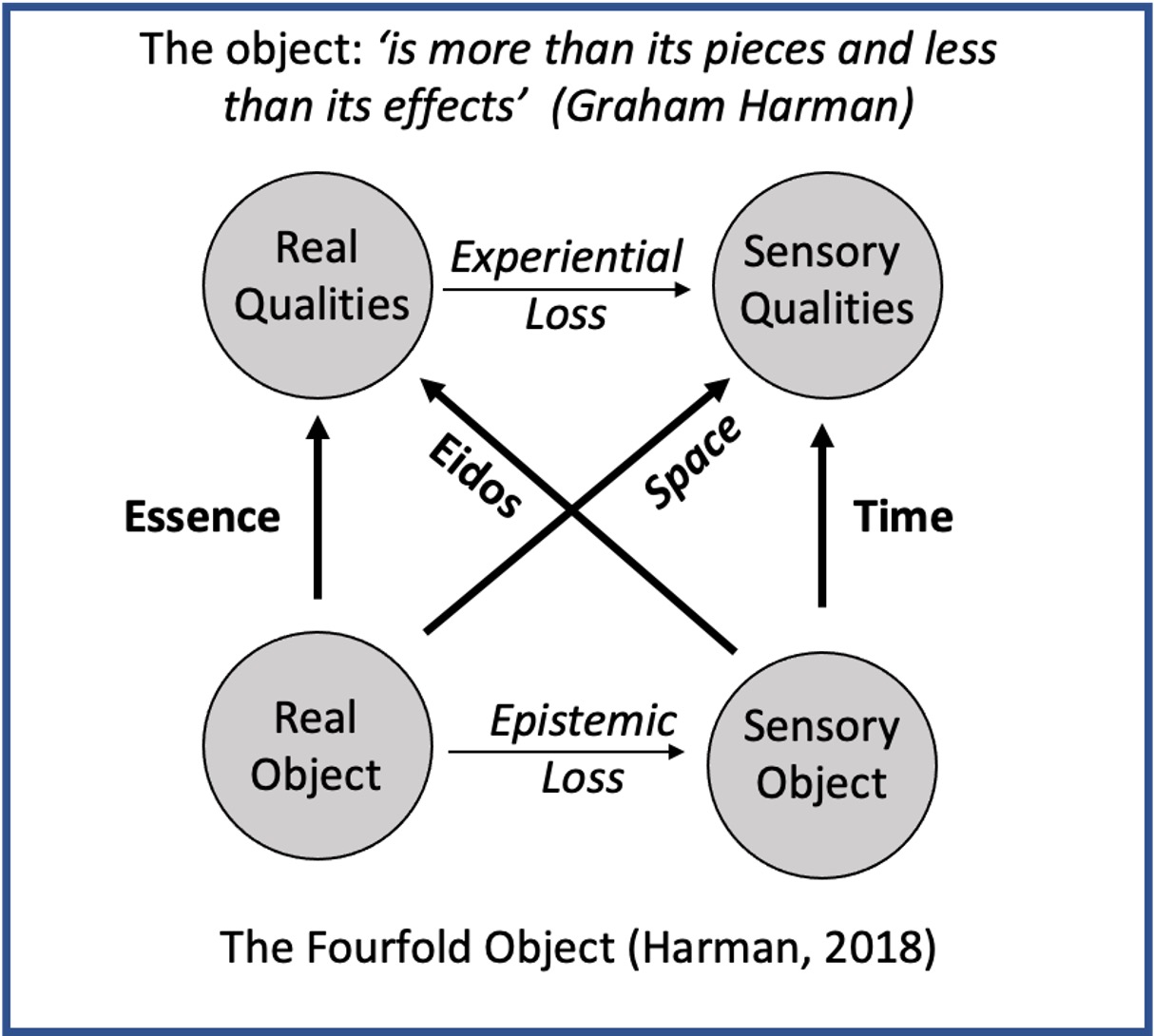 This is a world where Harman claims that philosophy is closer to aesthetics than mathematics and science, and rather than seeking to possess knowledge, that truth resides in reality.  It is a world where the autonomy of objects is paramount in spite of their inter-connectedness.   This is Object-Oriented Ontology (OOO), a branch of philosophy more generally termed Speculative Realism, and described by Harman as “the new theory of everything”.

In this world of OOO, Being resides within objects which form part of a reality, separate and independent of human awareness.  It is a world that is buried from sensory perception, presence and appearance.  Objects do not make full contact with other objects or with the human mind, but are mutually withdrawn.  The OOO world is in stark contrast to the post-modernists (such as Barthes, Foucault, and Zizek) where reality is socially constructed through language, power, and cultural practices.

Harman recognises that the conjunction of two Real elements, is the most difficult to describe and comprehend since neither the Real Object or its Real Qualities are visible to us.  He emphasises that OOO does not claim to know essence from direct contact or experience, and neither are accessible to us – rather like Kant’s noumena, remaining hidden behind presence and the sensory world.  As a result of Kant’s philosophy, the object and ontology were cast adrift in a sensory world for centuries.  However, for Harman, at least, it does not follow that an object’s inner soul or nature does not therefore exist.  He refers to Leibniz (ref 2018 p159) who considers that every Real Object is a single unit with a multiplicity of qualities, making it unique and essential in nature, and necessary in the world for determining one object from another.

For much of the first two years of my practice and research, my search has been for essence as defined in Graham Harman’s Object-Oriented Ontology (2018)(OOO).  Indeed, the Onion Diagram, a key output of the first year, derived and developed from my photographic practice, has at its heart the Essence of Self and Subject. 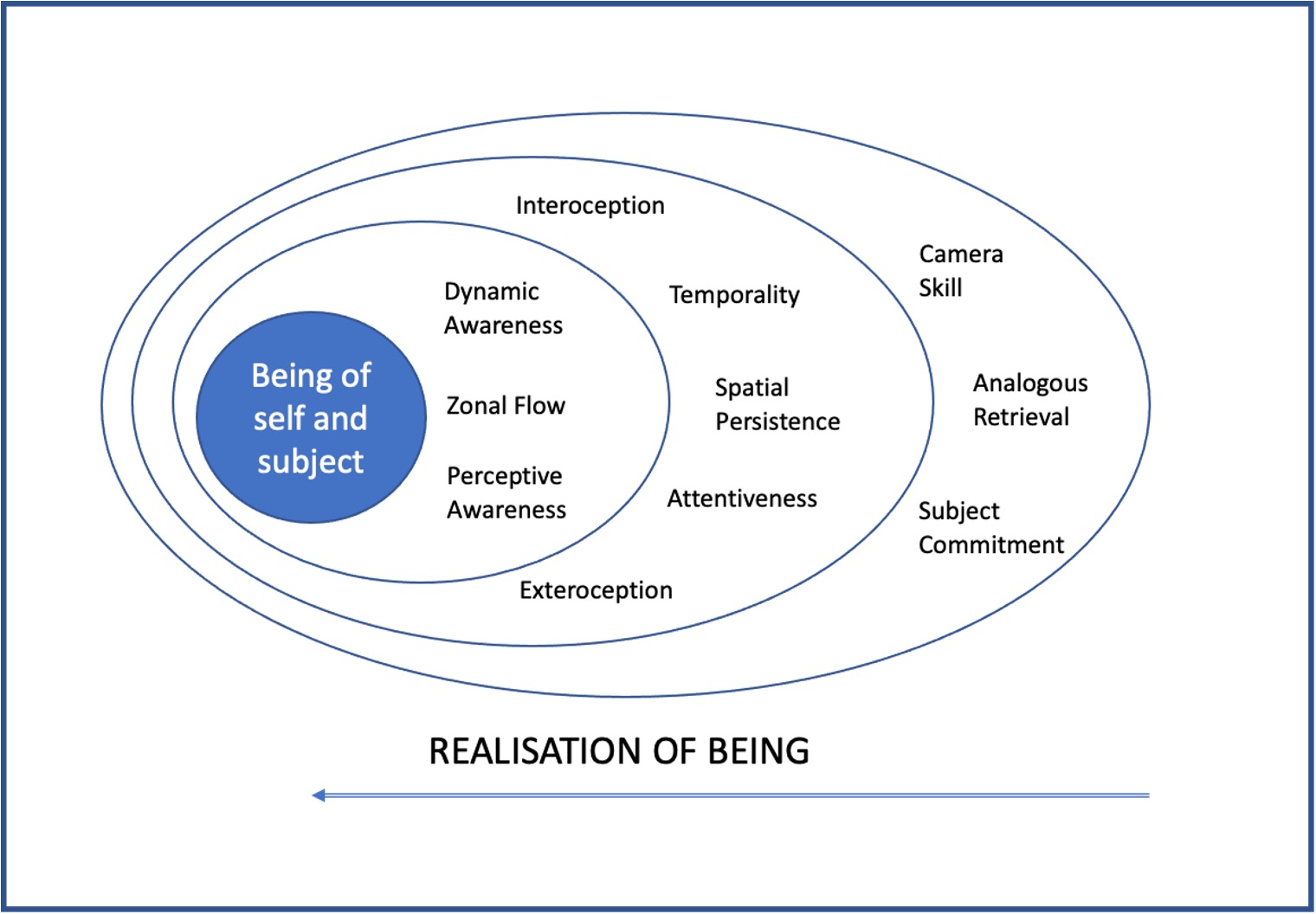 In the search for essence my practice became about glimpsing “ephemeral hiddenness”, and then about possibilising the “awareness” of another in the field.   Indeed, two of the ten signifiers of the Onion Diagram closest and most important to revealing the essence or a realisation of Being are Perceptive and Dynamic Awareness.  Kirstin Simpson in her MA Thesis (2015) refers to the aesthetic experience as being embodied through integrating mind and body.  Allure manifests a paradox of connection on the one hand and an enduring sense of separation on the other.  While Being aware of Being, we are aware that the object will remain forever withdrawn, except for perhaps a glimpse.  The Onion Diagram reflects this paradox in my practice.  While I am able to enhance my chances of experiencing allure in the field – through, for example, the development of particular camera or attentive skills, spending significant periods of time with the same object or in the same location – it is down to a moment of revelation or withdrawal.  Allure is a transitory moment when rather than being seduced by the sensory world, our attention is drawn by a glimpse of reality.  However, Harman’s concept of allure, for me, represents the Real Quality of the resultant image, that has reduced space and frozen time, through the unique properties of the camera, and thus brought allure to the awareness of the viewer.

It is becoming clear to me that those whose art and writing has commanded my attention over the years, most likely have allure – the “more than” to which Graham Harman refers.  It is interesting to look at the work of Monet and Nan Shepherd and see how those practising two different artistic genres can manifest the noumena through their painting or words.  In both cases, they have spent many years getting to know their locality, attending to the changes across the years and seasons.  They have both expressed a sense of Being and an ability to hint at that which remains hidden from so many.

My name is Alison Price and for the past ten years I have travelled the world photographing wildlife, including Alaska, Antarctica, Borneo, Botswana, the Canadian Arctic, Kenya, Rwanda, South Africa, Zambia and Zimbabwe.
← Thought Piece 30 - Developing my Thesis Narrative Finding the Narrative for my PhD Story →