In the News – “Shell-shocked: The Forgotten Vets” (Week 4)

For this week’s general blog I thought I would mention a very interesting article in The Times Magazine on 24 February.

In my view, one of the most iconic images of the twentieth century is the ‘Shell Shocked Soldier’ taken by Don McCullin in 1968 at the battle of Hue in the Vietnam War. McCullin said years later of the moment he saw the Marine:

“I noticed he was moving not one iota. Not one eyelash was moving. . . He looked as though he had been carved out of bronze. I took five frames and I defy you to find any change or movement in those frames.” 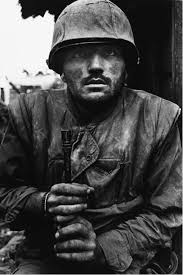 The article published on 24 February charts Anthony Loyd’s two year journey to try to track down some of the US Marines of Delta Company captured by Don McCullin fifty years ago.   The spoiler is that he did not manage to identify or make contact with the marine in the iconic image but he did meet and talk to a number of people in McCullin’s photographs.

The picture below shows Don McCullin himself at the front in Hue with Myron Harrington, the Delta Company commander, who Loyd met on his journey to meet and talk to the war veterans. 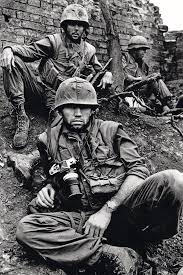 My name is Alison Price and for the past ten years I have travelled the world photographing wildlife, including Alaska, Antarctica, Borneo, Botswana, the Canadian Arctic, Kenya, Rwanda, South Africa, Zambia and Zimbabwe.
← 'Hope and Feathers' Collaborative Micro Project (Week 4) The Moral Triangle, UKIP and Manifestos (Week 5) →