I have regularly written in my CRJ about my use of metaphor in my photography and about my quest to strip back my subjects to reveal the essence of their being – whether they are trees, mountain ridges or reeds.

For my current Work in Progress Portfolio I have been experimenting by taking photographs in the dark, inspired by Saddleworth by Matthew Murray. By photographing in the early morning, twilight and dead of night I have found a way of revealing just the bare essence of the object through painting with light or using natural light such as moonlight. In order to capture this sense of being I spend many hours seeking out the inner being or heart beat of the landscape. I record my thoughts, feelings and emotions in my Photographers Journal as I work.

Quite by chance when reading Sean O’Hagan in the context of this week’s coursework I found a link to the work of Awoiska van der Molen, a Dutch photographer. I was fascinated by her images and also what O’Hagan had to say about her. 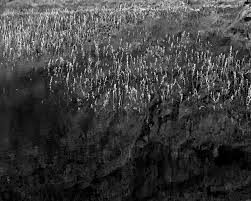 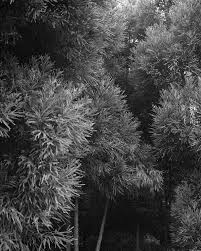 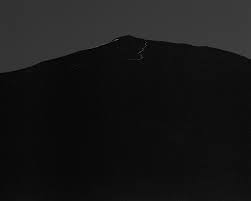 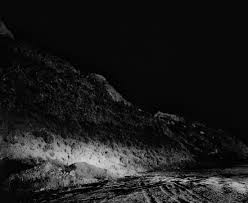 My research led me to Purdy Hicks Gallery where I found out a little more about her practice. This is what they say:

“Since 2009 van der Molen has taken black and white, abstracted images in nature. Spending long periods of time in solitude in remote landscapes, she slowly uncovers the identity of the place, allowing it to impress upon her its specific emotional and physical qualities.

Using her personal experience within the landscape for her creative process, she instinctively searches for a state of being in which the boundary between herself and her surroundings blur.” (O’Hagan 2014).

In Bewitched by Blackness: Photographing the Desolate Beauty of the Canaries O’Hagan refer to The Pleasures of Good Photographs by Gerry Badger in which he refers to “the quiet photographer” who is unusually attentive to “the there-ness of things and places.” He was speaking about Stephen Shore who had described photography as “an exercise in attention” and “an art form that calls forth intelligence, concentration and delicacy.” (Badger 2010:210).

O’Hagan says that these words from Shore and Badger came to mind when he saw the work of van der Molen. She works in monochrome, using long exposures in the morning or at dusk in search of what James Joyce called “the what-ness of things.”

The similarities between me and my work and that of van der Molen do not stop there – she too enjoys out of the way ‘wild’ places – her in the Canaries – me in the Isle of Skye. She spends many hours alone honing her craft – I spend many hours alone with my camera. This isolation, O’Hagan argues allows her to “gain access to the stoic nature of the landscape.”

“Here is a photographer that is infinitely patient, and interested in the stubborn core of things.” (O’Hagan 2014).

O’Hagan speaks of the haunting beauty of her images and concludes his article by saying:

“One senses that, for van der Molen, photography is like a metaphysical quest, a journey to the essence of things. Her images take me back to Nan Shepherd’s classic book The Living Mountain, which recounts, in luminous prose, the Scottish writer’s lifelong fascination with the Cairngorms as a physical and spiritual landscape.”

In the Sustainable Prospects module I too read and wrote about the work of Nan Shepherd https://wp.me/p9BvX0-iW and her influence on my work:

“It is a journey into Being: for as I penetrate more deeply into the mountain’s life, I penetrate also into my own.” (Shepherd 1977).

I am very excited at finding this work and will be spending more time learning about van der Molen’s approach as I begin my next four weeks of work on the Isle of Skye.  I am fascinated by the way she reveals tiny elements of the landscape but in doing so gives the viewer a glimpse of the world she is experiencing.

O’HAGAN, S (2014), Bewitched by Blackness: Photographing the Desolate Beauty of the Canaries. The Guardian, 26September 2014.

My name is Alison Price and for the past ten years I have travelled the world photographing wildlife, including Alaska, Antarctica, Borneo, Botswana, the Canadian Arctic, Kenya, Rwanda, South Africa, Zambia and Zimbabwe.
← Reflections on Informing Contexts (Week 8) Philosophy and Critical Theory relating to my Photographic Practice (Week 9) →