Philosophy and Critical Theory relating to my Photographic Practice (Week 9)

As I have progressed with my journey through this MA I have returned time and time again to the philosophy that informs my position.   As I said in my original Research Proposal in Positions and Practice I am committed to the phenomenological position – reading Kant, Husserl, Heidegger and others persuaded me (I didn’t need much) that what mattered was not the object of my experience but my experience of the object.  However, some things did make me uncomfortable about the undoubted insights of these philosophical ‘greats’.  The way I read them is that ‘being’ or ‘presence’ in other objects, whatever they are,  is always relative to the conscious mind doing the experiencing.   This ontology presents a lopsided view of the world that Quentin Meillassoux terms ‘correlationism’ – the idea that being can only ever be understood in terms of a conscious subject.

This view of the world has been challenged by a growing number of philosophers, who whilst working in the phenomenological tradition, are abandoning correlationism and adopting a ‘flat ontology’ where being is inherent in all objects – within each that being, the real object, can be glimpsed but never fully revealed.  Every object is also a sensory object  and this is the object we experience.   The ‘real object’ has its ‘essence’ being the emergent property which makes it more than the sum of its parts, and in photography we have a powerful tool in glimpsing that hidden aspect of its being.

I have written before about the power of metaphor to help draw back the veil and give us a glimpse of the essence of our subject.  However, to work, the image maker has to draw the viewer in, just as with method acting we have to stand on the stage and become what we are not – the subject of the metaphor.  We interpret that metaphor in our own individual way, but it only works if it draws us to the real object of the image and we take the place of the photographer.  So, although we may have a plurality of meanings we attach to the metaphor of the image, it points to the one central being of the subject.

So, in a nutshell, what does this imply?   An image has one essence but multiple routes to it.  Once the image is created, the subject and the photographer are withdrawn – they are no longer present until the viewer steps into the image. 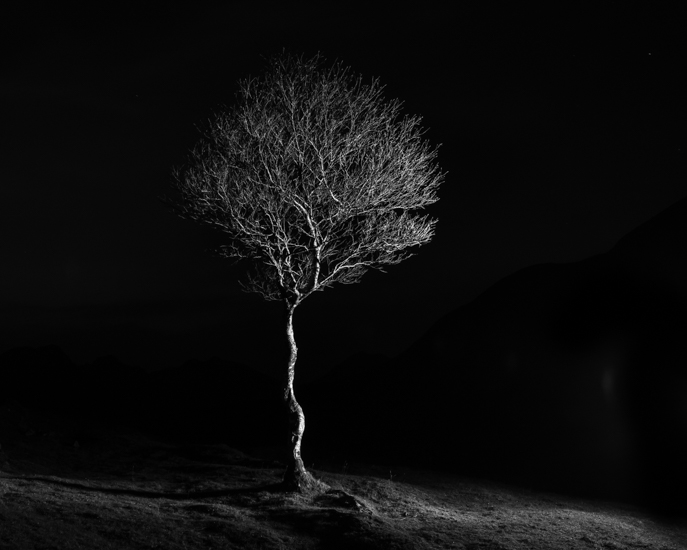 So, thinking again about the image of the tree etched with light above (that I presented some weeks ago) what matters is not the technique of painting with a torch – that is what it is, a technique.  What I sought to do when taking this image was not to demonstrate I could do that trick – I have done it many times before.  Rather through bringing together darkness and light, I wanted to strip the tree of all its elements except one so that it stands naked as a child, alone and vulnerable.  That is the metaphor, but to see the essence of the tree we have to step into the image and experience that vulnerability.

Coupled with that I also applied the process of ‘uncovering’ the essence through reduction.  This is a tricky idea and I thank my dear friend, the photographer Chris Weston for this analogy.  The tree is still there, like wine added to the cooking, the ingredients are reduced but the flavour enhanced.  The simple thing to do would be to forget the wine – that is simplification – but by reduction we attenuate what we don’t want, the alcohol and the sharpness.  In its place the essence of the recipe – the flavour – is revealed and enhanced.  So it is with the torch and the tree, the multiple bombardment of irrelevant sensual experiences are pushed back and the essence emerges telling its story and mine.

But to enjoy the aesthetic experience you cannot observe with Zen-like indifference.  You have to taste the food and if you are not willing to do that then you cannot experience its flavour.  Likewise, if you cannot or will not enter the image of the tree and take my place, then you cannot experience its vulnerability, and no matter how you may theorise on its significance, contextualise its presence in the cannon of contemporary photography or marvel at my skill (or otherwise) you will miss the point.  You cannot stand outside pointing in and talking amongst yourselves.  Ansel Adams got close to the heart of the matter when he said there are two people in every image, the photographer and the viewer.  That, is what I think is the failure of critical theory.  It doesn’t fail because of what it does, it fails because of what it doesn’t.

Correlationism – An Extract from The Meillassoux Dictionary

My name is Alison Price and for the past ten years I have travelled the world photographing wildlife, including Alaska, Antarctica, Borneo, Botswana, the Canadian Arctic, Kenya, Rwanda, South Africa, Zambia and Zimbabwe.
← Bewitched by Blackness - Awoiska van der Molen (Week 9) Contemporary Cultures of Display (Week 9) →