Into the Image World (Week 4)

First, we were asked to choose three adverts that exemplified a dominant, oppositional or negotiated reading and write a short statement outlining our interpretation.  My contribution is below:

Starbucks advertisement – Come in from the Cold 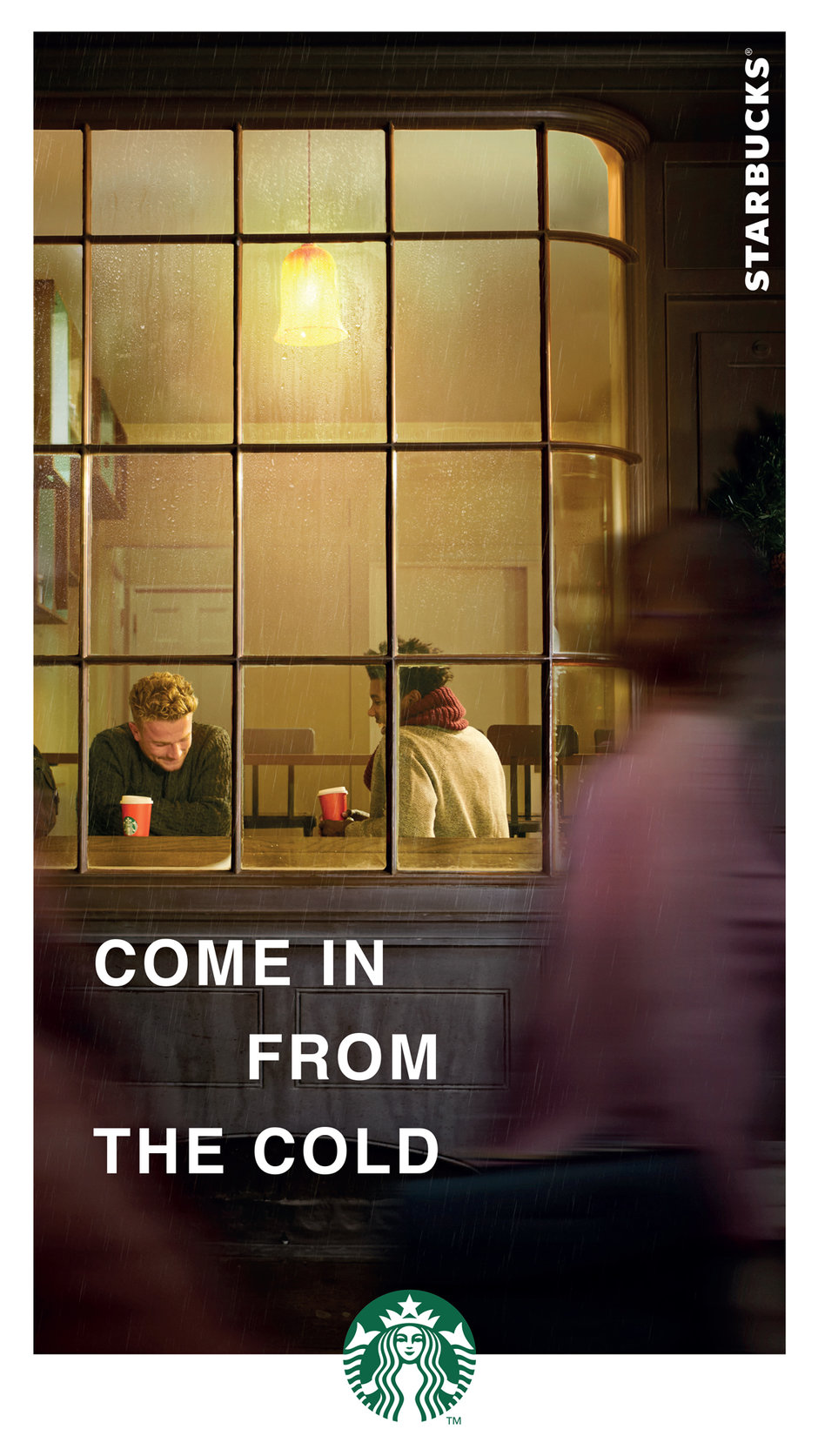 This image is part of a campaign with the similar messages: 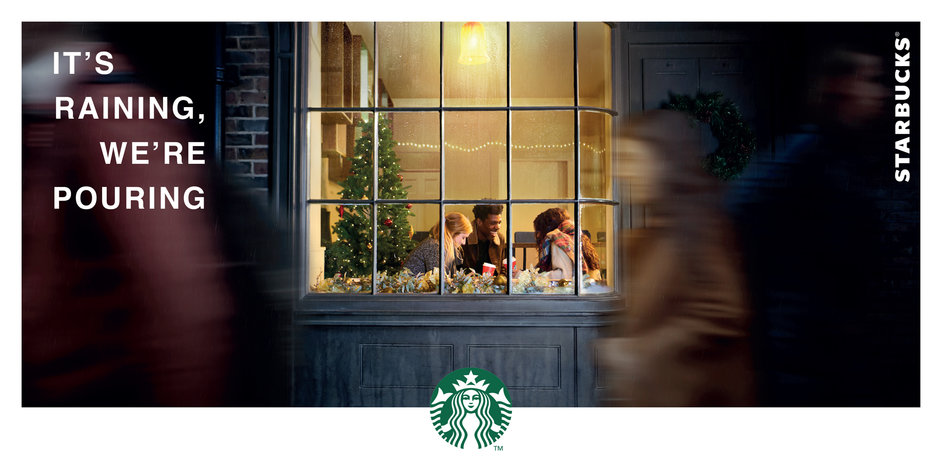 The images and words work together to encourage people to leave the cold street and seek the warmth of a Starbucks outlet.  The lighting inside creates a warm ambience whereas the street outside is inhospitable and dark.  The dark outside shop front almost has a Dickensian feel.  The décor inside is interesting as it almost gives the appearance of a house rather than a commercial enterprise.  The young men inside are deep in conversation although not overtly having a good time.  The fleeting image of what appears to be a woman is interesting.  The pink clothes are more akin with summer rather than winter and she does not appear to have a thick coat on.  The blurred effect almost gives the impression of her moving speedily past rather than hesitating and deciding to go in.  It gives me the sense that as a single woman she may not be comfortable joining the two men inside which works against the come in from the cold message.  Another interesting point is that the crop is tight on the woman and there is no welcoming door that would allow her to access the establishment.

I think the messages are mixed in this advert and so I feel I experienced a negotiated reading of the image. 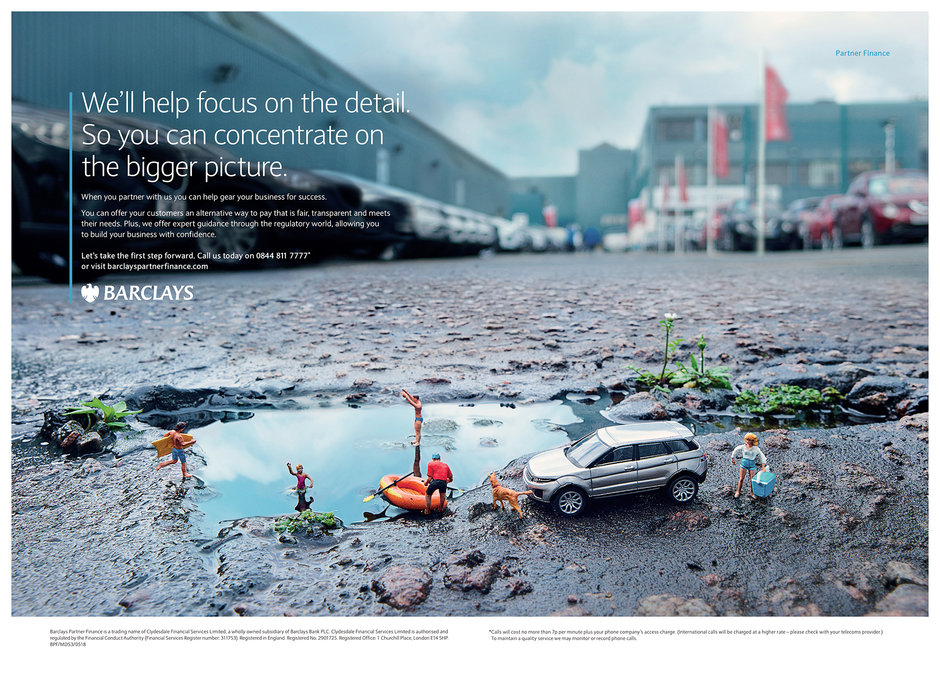 My second choice is an advert from Barclays selling services to the business owner.  Again, the words and image work together – the message being that if you bank with Barclays you will be able to focus on the things that matter ie the bigger picture – the things you enjoy in life and the detail in managing your business will be taken care of by Barclays.  The business image is faded into the background and is full size whereas the depiction of the leisure pursuits is smaller.  The models in the foreground are clear and reinforce the message of what the focus of life can be with a Barclays account.  It gives the sense of a happy family outing in a smart car along with the children and the dog.  For me, the advert seems to be aimed at men rather than women.  The car lot in the background reinforces this narrative.  I think this is the message Barclays wanted to convey so I think this is a dominant reading.

Nikon advertisement – I am Don Juan 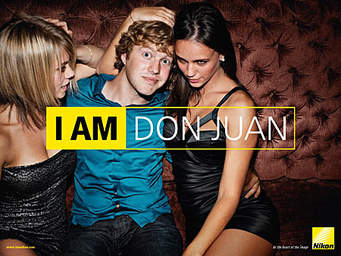 I have always been interested in the Nikon adverts I am . . . and this version took my eye.

The basic outline of the story of Don Juan is that he was a wealthy libertine who devoted his life to seducing women.  He took great pride in seducing women of all ages and walks of life.  His life is punctuated by violence and gambling.

For me, the advert is intended for men and the message is that if you own a Nikon camera then you too can live the life of Don Juan with a woman on each arm.  I wonder whether it is aimed at the older professional that has disposable income who might then expect to be able to live the life of a younger person as in the image.  The man posing as Don Juan is depicted as a foolish person which might be consistent with the persona but not the person that might be in the market for a Nikon camera.  I think Nikon are missing a trick given that large numbers of photographers are women.  Personally, I think the advert is sleazy and does not convey the right message to Nikon’s potential clientele but who am I to judge?  So, I think this is an oppositional reading.

I found the exercise interesting and wonder to what extent I am influenced by advertising.  I will certainly look more closely at adverts in future.

Roland Barthes infamous quotation below forms the basis for our second activity to identify potential different responses to our images:

We were asked to choose a single image that our fellow students had not seen and post it on the Forum without any explanatory text.  We were asked to comment on the meaning of others’ images.

The image I chose was this one: 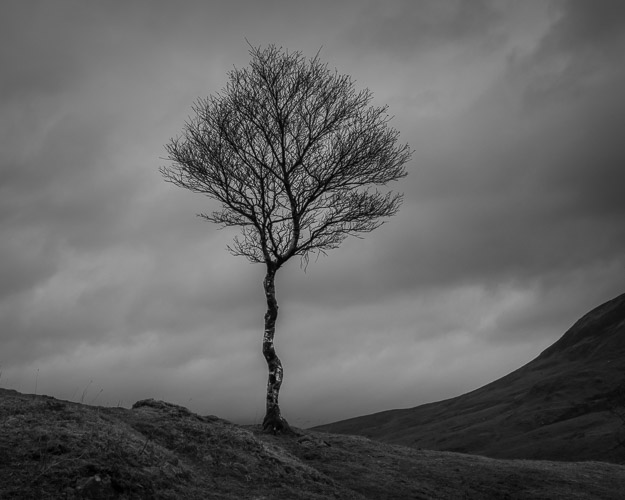 These are the comments I received from my peers:

“This image, the first thing I saw was a female body shaped from the trunk, with her arms stretched up as the branches, reaching out. Lonely and isolated, weathered by the winds on pretty barren land. It seems quite dark, moody clouds that add a sense of mystery to the image. Although I am drawn to the tree and branches going up however, I am equally intrigued as to what lies beyond.”

I had not consciously seen the female form through the trunk and branches of the tree.  This has happened before in my image making that I, or someone else, subsequently realise there are additional metaphors to those I had been consciously aware of when taking the image.  I was also interested by the comment that the viewer was intrigued as to what lies beyond.  I had been focused very much on the tree although I was keen to place the tree at the point where the background hills intersected.  I had not explicitly thought about the tree’s wider environment and context.

“This image denotes a solitary tree in an otherwise grassy landscape with two gentle hills and a cloudy sky. We can establish that it is winter from the leafless branches, and that the tree is quite young due to the narrow trunk. The tree is the dominant feature of the image, almost filling the entire height of the frame.

My initial reading was also of isolation and loneliness from this image with its absence of other trees, animals, structures or people, but then I began to see it more as a symbol of resilience and survival – the tree continues to grow despite the conditions of its environment.  The tree is on the brow of a foreground hill and the photographer looks upward to it slightly, giving some significance to it, and creating a lack of depth to the land beyond, shielding us from something perhaps, leading to questions as to what we are missing in the landscape. The colour too has been denied us, and we can only imagine its dampened winter tones. This area of the image makes me rethink isolation; rather I have the sense there may be something just out of view. This photograph is perhaps as much about what we cannot see.”

Another interesting comment.  This viewer has encapsulated my intentions when making the image.  However, there were two points that which I reflected on.  First, my decision to take the colour out of the image.  This was a conscious decision and I felt it allowed the viewer to focus more on the subject of the image.  Another comment about what is not in the picture and the wider context of the tree’s environment.  The reality is that there are few more trees on this hill and a road curving round the hill.  There is also a white house in the far distance.  In composing the image I chose to remove these contextual components by choosing my shooting spot carefully.  I did not want to confuse the viewer or add distractors to the narrative.

“I see a message of hope in this image. A lone tree in a vast landscape after having taken root in a hostile environment has thrived. Bent but never broken in the winds and storms of its lifetime. The angry sky is poised to unleash yet another fury upon this sturdy tree as it stands unflinching and proud in the knowledge that the storm will be gone tomorrow but it will still be standing.”

My name is Alison Price and for the past ten years I have travelled the world photographing wildlife, including Alaska, Antarctica, Borneo, Botswana, the Canadian Arctic, Kenya, Rwanda, South Africa, Zambia and Zimbabwe.
← Reflections on Informing Contexts (Week 3) Why do Photography Critics hate Photography? - Susie Linfield (Week 4) →