This week’s coursework is about contexts in which objects are displayed. This subject is not just about how we might arrange our work in a particular space but also about the politics and economics of art organisations. These institutions in turn are able to influence art history by determining what has value and what does not – the likes of galleries and museums are not “neutral containers” as Emma Barker in Contemporary Cultures of Display explains:

“Rather we need to consider them in terms of ‘cultures of display’, that is, with reference to the different ideas and values that can shape their formation and functioning.” (Barker 1999:8).

‘The museum without walls’ was a phrase first coined by the French writer Andre Malraux in 1947 but it has since been used in terms of the circulation and presentation of art beyond the museum through reproduction. This, of course, expanded the audience for art way beyond the previous boundaries. Museums in their own right have done much to extend access to art beyond a wealthy elite. But ‘the museum without walls’ concept is also applied to temporary exhibitions and public art, often exhibited outside, such as sculptures.

Carol Duncan refers to art museums as ‘ritual sites’ dedicated to the ‘religion of art’. The word display is interesting, as it is both a noun and a verb, and it is the verb version that implies the act of directing and curating exhibitions. Those directors and curators of exhibitions present individual works in the context of particular aims and objectives and the collection of works as a whole. Art Museums also classify exhibits, and their very existence in a museum suggests the individual piece is worthy of inclusion in terms of quality, originality or authenticity – curating in and of itself becomes an art form. The act of creating a contemplative space in which art can be viewed primarily for its aesthetic interest, is viewed from some critical perspectives as a form of fetishism, and Barker gives the example of placing objects under spotlights in dimly-lit rooms thus providing a sense of mystery and value and so doing taking it out of their original context. The viewing experience is also influenced by the perceived value of the work of art.

Barker also refers to art as spectacle. The obvious example is the Wrapped Reichstag by Christo and Jeanne Claude where the building was covered in silver fabric. 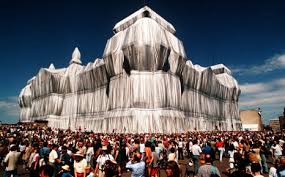 The work, of course had a political message and gained consent in 1994 at the end of the Cold War. The installation cost around £8 million pounds and was a temporary construction. The concept of the spectacle is an example of what Marx would term ‘commodity fetishism’ – a fact of modern life. The problem of spectacle is therefore seen as a means of subordinating art to commercial priorities. Baudrillard went further by suggesting that rather than being in ‘the society of the spectacle’ the world had moved on to a regime of the simulacrum. Furthermore, he argued that in trying to recapture a sense of the real, the world was compensating through a sense of ‘hyper-reality’. 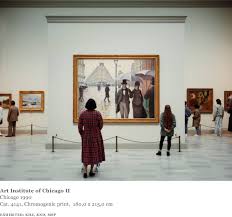 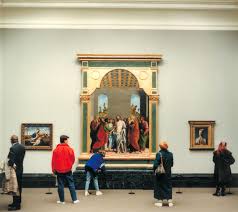 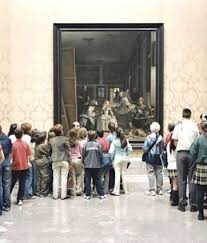 Emma Barker refers to the gallery setting encouraging us to slow down and contemplate over an image we enjoy or captures our imagination for whatever reason.

Whilst Struth captures some of that behaviour in the images above he also records what appear to be groups of tourists seemingly wanting to move quickly to complete their whistle-stop tour and move onto the next gallery experience. 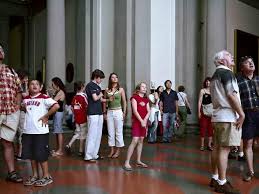 I particularly like this final image from Struth where just the image itself is captured leaving it to reflects its aura. 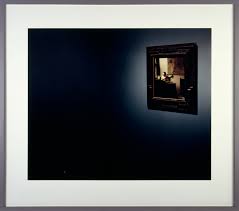 I also enjoyed hearing more about how Rirkrit Tiravanija in Untitled (Free) converted 303 Gallery in New York into a kitchen where he served Thai curry and rice.

But for me, the most interesting discussion in this week’s work were the provocative comments from Jonathan Jones (2014) about photography not being art but technology and the practice of hanging photographs in galleries:

“It looks stupid when a photograph is framed or backlit and displayed vertically in an exhibition, in the way paintings have traditionally been shown. A photograph in a gallery is a flat, soulless, superficial substitute for painting. Putting up massive prints is a waste of space, when the curators could provide iPads and let us scroll through a digital gallery that would easily be as beautiful and compelling as the expensive prints.” (Jones 2014).

Whilst I would agree with Jones that some photography is better viewed on some type of screen, many photographers work would be diminished if they were exhibited solely in this form. Thomas Struth’s work, for example, would not work on an iPad and we saw the sheer size and presence of his images displayed in the Whitechapel Gallery. Similarly, Salgado’s images work effectively in a traditional gallery setting.

Sean O’Hagan hit back in The Guardian the following day by arguing that ‘the photography is not art debate’ has raged for so long it is hardly debating and that using the Wildlife Photographer of the Year Exhibition and images from the Taylor Wessing Prize as a poor yardstick for judging such matters. O’Hagan refers to postmodernists Cindy Sherman and Jeff Wall who are artists that use photography. On the other he cites Julia Margaret Cameron, Robert Frank and Diane Arbus, amongst others, who photography is art – of which all successfully hang their work on gallery walls. O’Hagan questions whether Jones has ever stood in front of a Julia Margaret Cameron portrait. He argues that digital photography, rather than turning everyone into a good photographer, has rather enabled everyone to take and disseminate their images quickly and easily.

I have enjoyed this week’s topic and found it helpful to be reminded how the white wall can influence how work is viewed, how it might encourage certain behaviours in the audience, and the commercial and economic context in which museums and galleries operate.  It has also led me to consider whether a gallery wall is the best location for my work.  This I will need to consider further as I move into the Final Major Project.

BARKER, E. (ed). 1999.  Contemporary Cultures of Display in Art and its Histories. London: Yale University Press in association with The Open University.

My name is Alison Price and for the past ten years I have travelled the world photographing wildlife, including Alaska, Antarctica, Borneo, Botswana, the Canadian Arctic, Kenya, Rwanda, South Africa, Zambia and Zimbabwe.
← Philosophy and Critical Theory relating to my Photographic Practice (Week 9) Reflections on Informing Contexts - David Eustace - Mar a Bha (Week 9) →