“Will the Real Cindy Sherman Please Stand Up” (Week -4)

As part of our pre-module work we were asked to consider the work of Cindy Sherman and answer some questions.

Cindy Sherman is a photographer who has spent over thirty years taking self-portraits.  However, these are not conventional portraits but ones where she adopts various guises and characters styled by her.  In fact, speculation about her real identity contributes to its impact.  She acts as make-up artist, hairdresser, stylist and photographer and in doing so conflates the roles of actor, artist and subject.  All her work is untitled, and she is clear that it is for the viewer to work out their own interpretation of the image.

“Every picture stars Sherman as the protagonist and is staged— from camera angle and props to hair, makeup, poses, and facial expressions. In keeping with the rules of film, her characters don’t address the camera, often looking out of the frame with blank expressions or seemingly caught in a reverie. The “Stills” are constructed rather than appropriated; they blur narrative, fiction, film, roleplaying, and disguise.” (Meagher 2002)

Her Untitled Film Stills is probably her best-known work.  Here are a selection of her images: 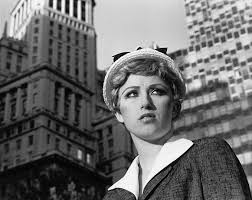 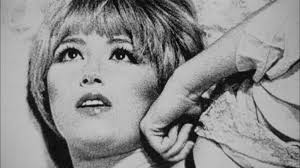 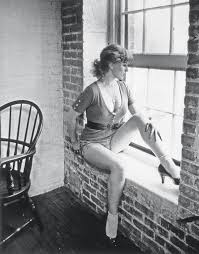 Questions we were asked:

Given the amount of care, effort and preparation that Sherman clearly undertakes in making her characters and determining her location it seems inconceivable to me that all this is done without intent or a wish to deliver a message, narrative or viewpoint.  In addition to her immediate work of make-up, hair, costume and expression in bringing her subjects to reality she is also spending a great deal of time creating and dreaming up the images and personas.  She is making clear choices about the process and methodology of her image-making including choosing self-portraiture (in terms of using herself as the model albeit changed beyond recognition), using film sets as her inspiration for the locations and determining in many cases not to look straight at the camera.  She also chooses to work in marketing which clearly has a particular intent.  One of the most successful marketing strategies is about shaping a response by the positioning of cues within the image and through ‘nudging’ the desired response.  Her images are rich in these cues stimulating (or in her case simulating) in turn desirability, vulnerability, seductiveness and brazenness.  However, the question is: for whom is the response required?  I will return to my view of the answer to that question later.

Her work Untitled Film Stills was influenced by the movies of the 50s and 60s and genres such as Film Noir and whilst Sherman makes clear that she is not reproducing characters from films of that time directly, both she and the viewer will have been influenced and affected by this era and its image-making.  Indeed, Sherman acknowledges that we are all conditioned by cinema and other media, and she uses these associations to steer her viewers in many narrative directions.

I do not believe she is successful in relation to the inclusive and anti-intentional approach to her work although it is without question that she has been able to generate huge interest and demand for her work.  To me she is a self-publicist creating an enigma and a narrative that is not borne out by her techniques and methodologies.

I believe that I am developing a methodology that attempts to encourage my viewers to join me in my journey of self-reflection through nature which I hope has a universality that others can relate to.  Many of us need to find ways of learning to live with bad memories from our life experiences.  In my most recent work I have started to add words to my images but have tried not to be either descriptive or directive in my choice of words.  However, my viewers may take a different view.

The curators of the Brisbane Exhibition describe Sherman as a conceptual photographer who paints her characters onto her face.  They suggest that Sherman is not particularly interested by the technical aspects of photography but more about telling stories.  They refer to a particular period in cinema history when women were the higher paid and so the work is about moving through social class – it is about class, beauty and aspiration.  They say that Sherman is not overly didactic in terms of how the viewer should receive her work.

Sherman has clearly had significant input into the presentation of her work for exhibition.  The exhibition includes 65 accompanying films alongside the images presented as a horizontal journey. 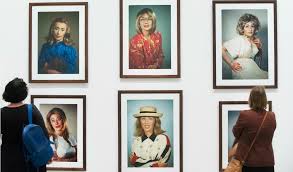 Who is Cindy Sherman? – Brisbane

There is a series of super-size murals presented in a curved room. 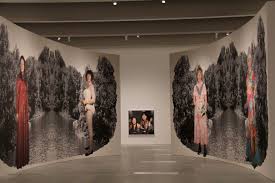 Who is Cindy Sherman – Brisbane

Sherman has also used sight lines from one part of the exhibition to another to encourage the viewer to make links between her images.  It seems to me that the gallery context is appropriate and allows Sherman to present her work through various modes of delivery, enabling the viewer to reach their own conclusions about this body of work.

Sherman is creating an air of mystique by morphing herself into various stereotypes and characters but in doing so creates a great deal of interest in who she really is and what she looks like. For me this is an exercise in self-presentation and marketing on an epic scale which has been hugely successful – it is the ‘Banksy’ approach to mystique building by hiding in plain sight. If she is not a self-publicist then why not use models to photograph rather than self-portraiture?  Sherman’s work in some ways reminds me of Elina Brotherus who also chooses to photograph herself in the landscape or in staged studio sets.  Although in Brotherus’s case she has a clearer and more explicit intentional narrative to her work.

“It is difficult to divorce the “Untitled Film Stills” from the mountain of critical writing they stimulated, in which they were cited to illustrate postmodernism, feminism, psychoanalytic theories of the male gaze, and the culture of the spectacle.” (Meagher 2002)

Craig Owens, the art historian sees Sherman’s images as a “critique of the construction of feminist identity seen in the media” and goes on to say:

“Sherman’s women are not women but images of women, specular models of femininity projected by the media to encourage imitation, identification; they are, in other words, tropes, figures.” (Craig Owens in Meagher 2002)

It is difficult to see how Sherman’s work could be anything other than feminist.  However, a more negative interpretation is that her work is an appropriation of feminism for pecuniary gain.  In many of her images, in my view, she is creating a caricature of what she thinks attracts the male gaze constructing ‘straw women’ for the cerebral titillation of her intended audience: the critics and the wealthy ‘sophisticates’ who collect artistic trophies as signifiers to their taste.

I produce my work to fulfil my own aspirations and needs, and do not seek to apply particular lenses or critical theories.  My major driver is to convey to others my experience of the landscape and wildlife I am photographing and in doing so encourage an emotional response in the viewer.  I spend a good deal of time reviewing and learning from other practising photographers, seeing the world from their perspectives and enjoying reading about their understanding of how they fit more widely in contemporary photographic practice.

My name is Alison Price and for the past ten years I have travelled the world photographing wildlife, including Alaska, Antarctica, Borneo, Botswana, the Canadian Arctic, Kenya, Rwanda, South Africa, Zambia and Zimbabwe.
← Holiday Reading - Arctic Solitaire by Paul Souders (Week 12) What is Critical Theory? (Week -4) →