What is Critical Theory? (Week -4)

As part of my preparation for the next module in my MA Photography – Informing Contexts – I am trying to get to grips with critical theory but before I can do this, I would like to understand better how critical theory is defined and how it might be useful for me in my photographic practice.  I am writing this post as much as an aide memoire to myself to inform at least the early weeks of the course.

The dictionary definition of critical theory is as follows:

“a philosophical approach to culture, and especially to literature, that considers the social, historical, and ideological forces and structures which produce and constrain it.”

The first few paragraphs of Wikipedia on this subject are:

“Critical theory is the reflective assessment and critique of society and culture by applying knowledge from the social sciences and the humanities. As a term, critical theory has two meanings with different origins and histories: the first originated in sociology and the second originated in literary criticism, whereby it is used and applied as an umbrella term that can describe a theory founded upon critique; thus, the theorist Max Horkheimer described a theory as critical insofar as it seeks “to liberate human beings from the circumstances that enslave them.”[1]

Postmodern critical theory politicizes social problems “by situating them in historical and cultural contexts, to implicate themselves in the process of collecting and analyzing data, and to relativize their findings.”[4]”

The Stanford Encyclopaedia of Philosophy articulates both the narrow and broad meanings of critical theory:

“Critical Theory has a narrow and a broad meaning in philosophy and in the history of the social sciences. “Critical Theory” in the narrow sense designates several generations of German philosophers and social theorists in the Western European Marxist tradition known as the Frankfurt School. According to these theorists, a “critical” theory may be distinguished from a “traditional” theory according to a specific practical purpose: a theory is critical to the extent that it seeks human “emancipation from slavery”, acts as a “liberating … influence”, and works “to create a world which satisfies the needs and powers” of human beings (Horkheimer 1972, 246). Because such theories aim to explain and transform all the circumstances that enslave human beings, many “critical theories” in the broader sense have been developed. They have emerged in connection with the many social movements that identify varied dimensions of the domination of human beings in modern societies. In both the broad and the narrow senses, however, a critical theory provides the descriptive and normative bases for social inquiry aimed at decreasing domination and increasing freedom in all their forms.

Critical Theory in the narrow sense has had many different aspects and quite distinct historical phases that cross several generations, from the effective start of the Institute for Social Research in the years 1929–1930, which saw the arrival of the Frankfurt School philosophers and an inaugural lecture by Horkheimer, to the present. Its distinctiveness as a philosophical approach that extends to ethics, political philosophy, and the philosophy of history is most apparent when considered in light of the history of the philosophy of the social sciences. Critical Theorists have long sought to distinguish their aims, methods, theories, and forms of explanation from standard understandings in both the natural and the social sciences. Instead, they have claimed that social inquiry ought to combine rather than separate the poles of philosophy and the social sciences: explanation and understanding, structure and agency, regularity and normativity. Such an approach, Critical Theorists argue, permits their enterprise to be practical in a distinctively moral (rather than instrumental) sense. They do not merely seek to provide the means to achieve some independent goal, but rather (as in Horkheimer’s famous definition mentioned above) seek “human emancipation” in circumstances of domination and oppression. This normative task cannot be accomplished apart from the interplay between philosophy and social science through interdisciplinary empirical social research (Horkheimer 1993). While Critical Theory is often thought of narrowly as referring to the Frankfurt School that begins with Horkheimer and Adorno and stretches to Marcuse and Habermas, any philosophical approach with similar practical aims could be called a “critical theory,” including feminism, critical race theory, and some forms of post-colonial criticism. In the following, Critical Theory when capitalized refers only to the Frankfurt School. All other uses of the term are meant in the broader sense and thus not capitalized. When used in the singular, “a critical theory” is not capitalized, even when the theory is developed by members of the Frankfurt School in the context of their overall project of Critical Theory.

So how does critical theory relate to photography?  I was reassured by the words of Ashley la Grange in the preface to her book Basic Critical Theory for Photographers (2005):

“Many people are put off critical theory because they see it as difficult (often unnecessarily difficult) and cannot see its relevance to their own practical work.  The situation is not helped by the fact that much critical is written by academics, for other academics who are already familiar with the issues, vocabulary and earlier arguments.  The result is that critical theory becomes unnecessarily elitist and many people who would be quite capable of debating the issues are discouraged from doing so.”

In desperation I turned to my “go to” book at the moment On Being a Photographer (1997) by David Hurn and Bill Jay.  They make their view of critical theory very clear:

Critical and theorists are useful to photographers

“Most colleges and universities do not hire the best in the field because these individuals are full-time photographers.  Teachers are in the classroom, or at meetings, most of the time so all they can do is talk about photography.  So, it is not surprising that in academia has arisen a peculiar type of critical theory which young photographers are expected to apply to their own work and reference when discussing the work of others.

We have two attitudes to critical theory:

Attitude one:  When critical theory is taught prior to or simultaneously with the making of images: in this case, critical theory is not only useless, it is also positively dangerous.  It has nothing whatsoever to do with the production of fine photographs. The irony here is that most of the top photographers, often cited by the critics, have never read these theories, would not understand them even if they encountered them, and have no idea that such an influential group of thinkers exists in the medium.!”

Attitude two:  When critical theory is taught after the images have been made or about other photographers’ works:  in this case, critical theory can be an enjoyable way of stretching the mind, if the critic is capable of thinking clearly and expressing his/herself with concise, vivid prose.”

“. . . We say “can be” usually critical theory is none of the above but an experience akin to wading in thick mud through a dense fog.  It is no fun.  The reason is that the language used by academic theorists in photography is so dense, obscure, jargon-filled and so damned dull that it is usually impossible to decipher the points that are being made.”

“imagine the inartistic natures . . .against whom will they now turn their weapons?  Against their arch-enemies the strong artistic spirits . . . they act as though their motto were: let the dead bury the living.”  (Nietzsche 1874)).

Reading these references, quotations and thoughts has made me laugh and feel better and I now have a few helpful definitions that I can turn to when I next enter the fog!  Once more into the breach . . .! 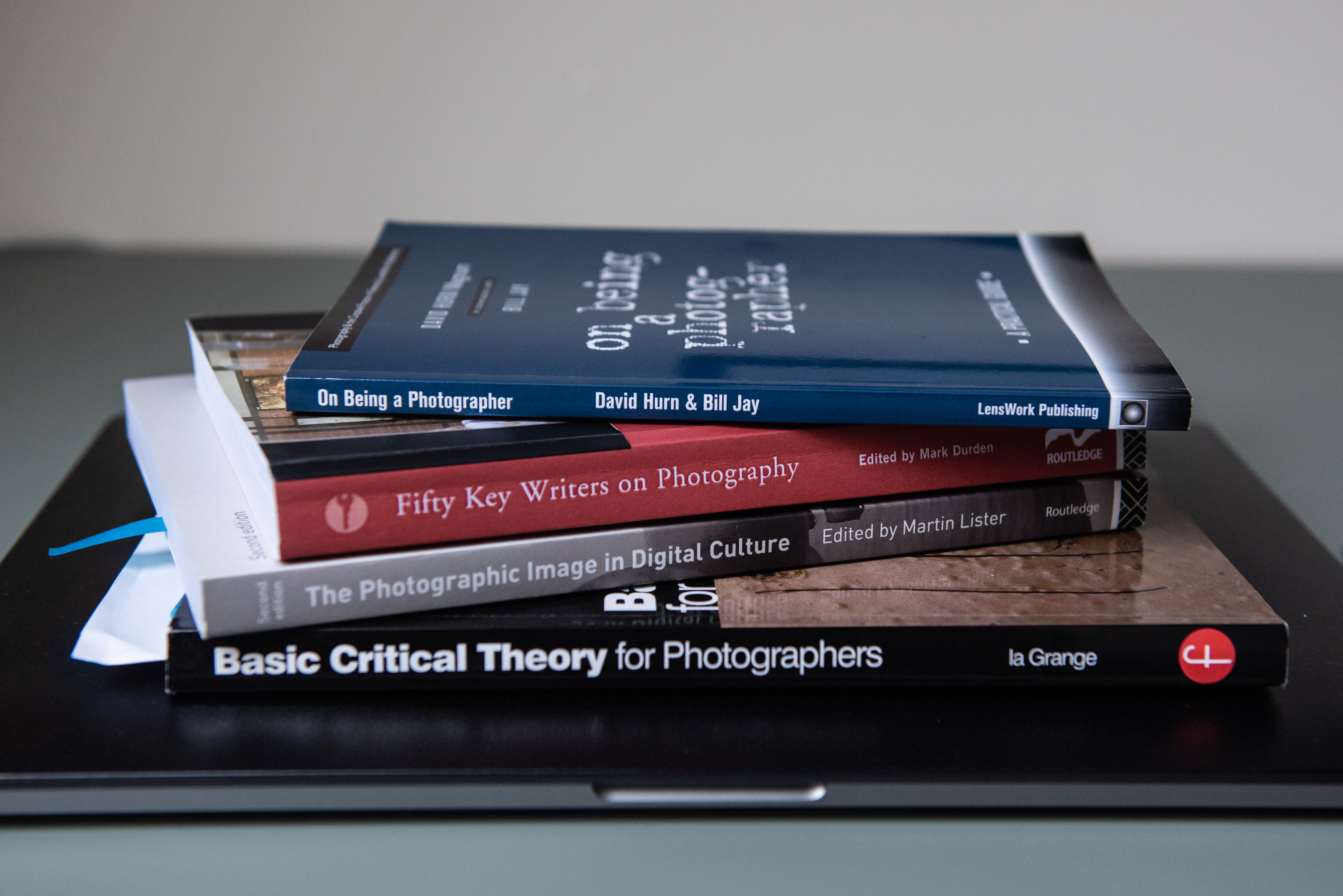 HURN, David, and Bill JAY. 1997. On Being a Photographer – A Practical Guide. Anacortes, WA: LensWork Publishing.

NIETZSCHE, F (1874) On the Uses and Disadvantages of History for Life. Cambridge: Cambridge University Press.

My name is Alison Price and for the past ten years I have travelled the world photographing wildlife, including Alaska, Antarctica, Borneo, Botswana, the Canadian Arctic, Kenya, Rwanda, South Africa, Zambia and Zimbabwe.
← "Will the Real Cindy Sherman Please Stand Up" (Week -4) Thinking about my next Work in Progress Portfolio (Week -4) →