Turner – The Sea, the Alps and Loch Coriskin

Regular readers of my blog will be aware of my fascination and admiration of the work of J M W Turner. In the Final Major Project for my MA Photography I drew inspiration from his paintings, not only in terms of his dreamy watercolours but also his freedom of technique in depicting the power of nature through paintings such as the Snow Storm: Steam-Boat off a Harbour’s Mouth (1842). As a Christmas present, I received Turner – The Sea and the Alps – a beautiful book that accompanied the exhibition of the same name held at the Kunstmuseum Luzern in 2019, to coincide with the museum’s 200th anniversary. 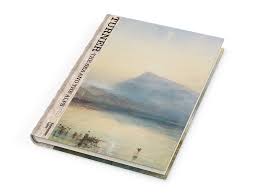 The Kunstmuseum collaborated with the Tate on this project.  The Tate holds around 30,000 works on paper, 300 oil paintings and 280 sketchbooks (from the Turner bequest) on behalf of the nation. The book and the exhibition included, for me, at least, some lesser known sketches and paintings by Turner. He travelled to Switzerland six times from 1802 to 1844 and captured not only his journey to the country by sea, but also the beauty and dangers of nature.

I was particularly attracted by some of the sketches of the dangerous passes and gorges he visited, such as Blair’s Hut on the Montenvers (1802), The Pic deL’Oeillette, Gorges du Guiers Mort (1802), Chartreuse and The Schollenen Gorge from the Devil’s Bridge, Pass of St Gotthard (1802): 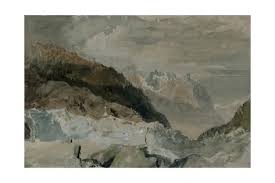 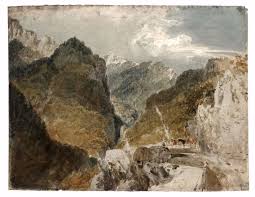 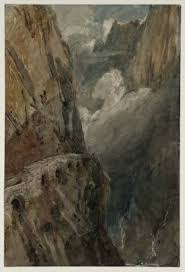 By experiencing the landscape first hand, Turner was able to capture the inherent danger of being high up in the mountains, the threatening clouds and the glimpse of the weather closing in.  However, even with this sense of foreboding in the paintings Turner is also able to achieve extraordinary luminosity and depth in his work.

By a stroke of luck, when perusing The Cuillin of Skye (1952) by B H Humble, I found an engraving on paper by Turner of Loch Coruisk (the Loch in the centre of the Cuillin range) although named Loch Coriskin.  Turner had been asked to produce some paintings to accompany Walter Scott’s Poetical Works.  Turner visited Scotland in 1831 staying at Scott’s home Abbotsford.  During his visit he clearly travelled widely.  Unfortunately, Scott did not see Turner’s finished work as he died in 1832. 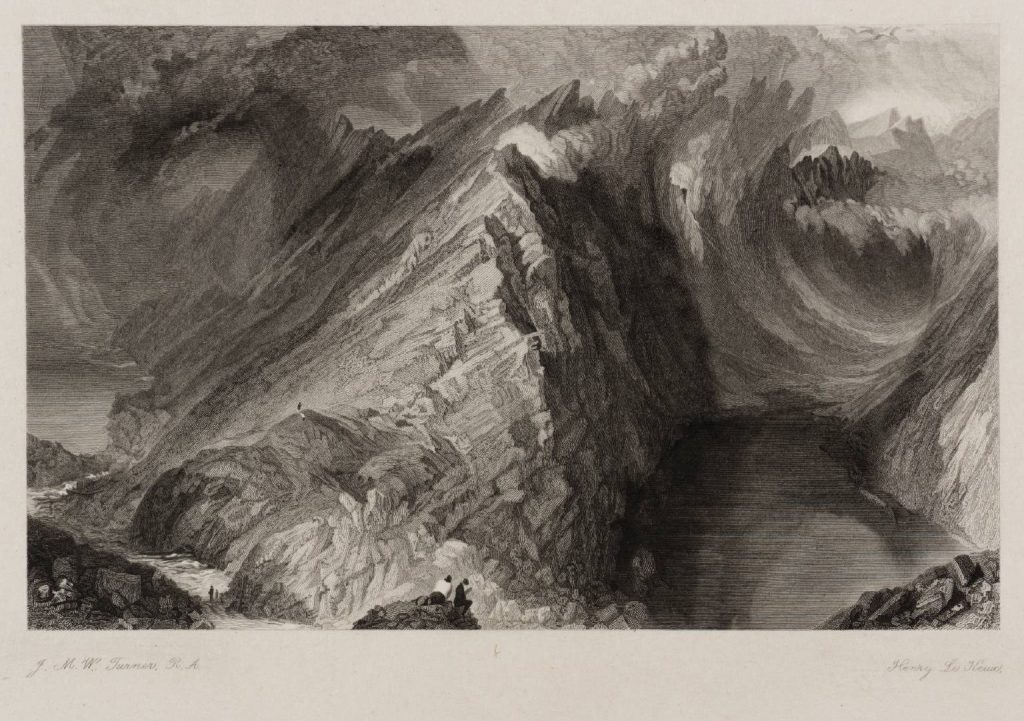 Humble, I feel, is rather dismissive of Turner’s work considering it to have “no resemblance to actuality”.  (Humble 1952 Image 4).  To the contrary, whilst it might not be an accurate representation, in Humble’s opinion, for me it captures the character, menace and movement – the essence – of the Black Cuillin perfectly.  I don’t think, for a moment, Turner’s intent was to reproduce an accurate and lifeless representation.

Turner was not only inspired by the beauty of the landscape that he captured but, like me, was fascinated by nature’s power and menace. He saw menace in the Alps as I see in the Cuillin in Skye, as something to fear but nonetheless be drawn to and captivated by: 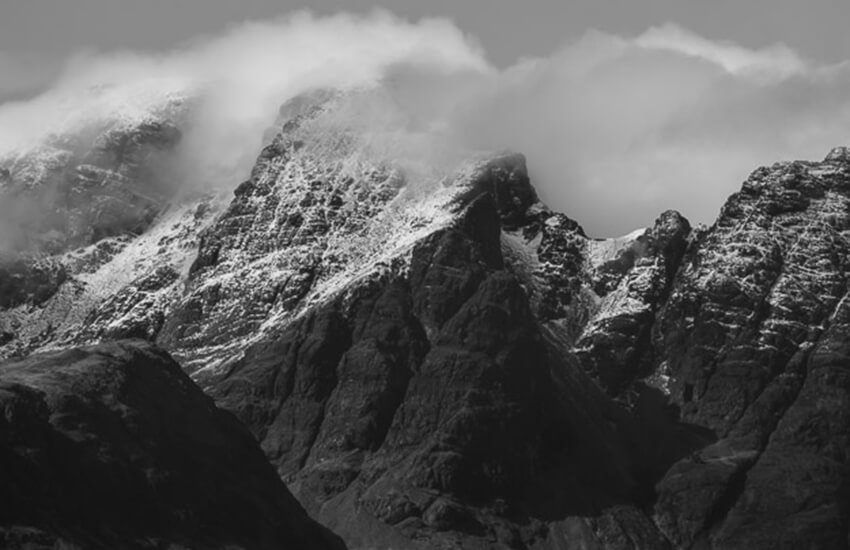 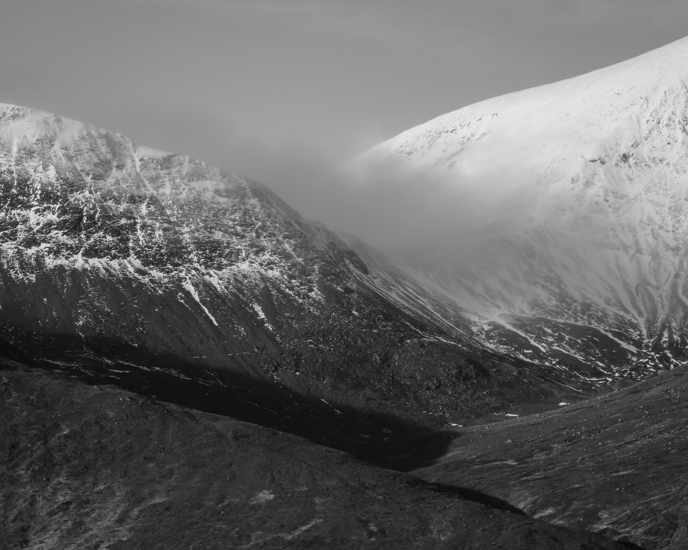 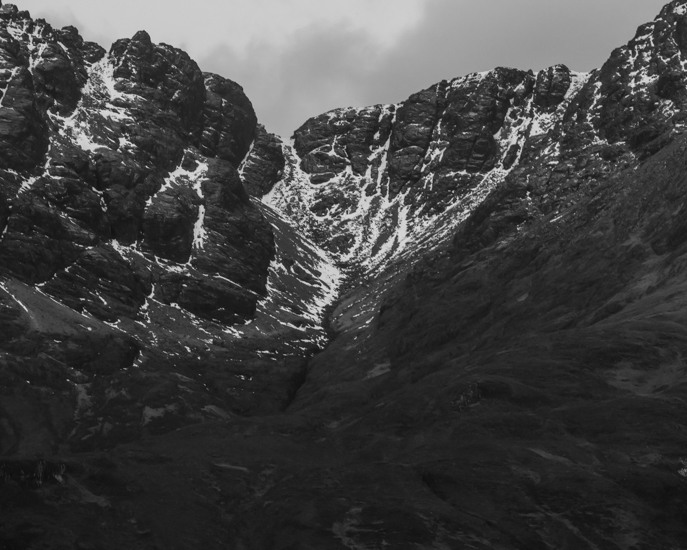 I am reminded of the words of Seton Gordon writing about the Black Cuillin in his 1929 book The Charm of Skye:

“There is no hill range of Scotland which varies so greatly in aspect as the Cuillin of Skye.

With the weather their mood changes suddenly.  They smile or are sad; they frown and are terrible.  The dun wind from the Atlantic reaches their blue, clear-cut spires and immediately a mist curtain is drawn across them; before the coming of a storm they clothe themselves with the blue mantle of mystery.

Then there are days (and the day of which I write was one of then) when the Cuillin are alive with benign spiritual forces; when the hill silence tells of many wonderful things; when hill, sky and ocean glow with life and energy.”  (Gordon 1929: 77).

My name is Alison Price and for the past ten years I have travelled the world photographing wildlife, including Alaska, Antarctica, Borneo, Botswana, the Canadian Arctic, Kenya, Rwanda, South Africa, Zambia and Zimbabwe.
← MA (Photography) from Falmouth University - tick! Image of the Week (February Week 1) →