Image of the Week (February Week 1)

As part of my writing moving forward, I have decided to post an image each week and talk about how I got the shot and why I think it works.

I have been back in Skye for a week now and taken hardly any images. The weather has been relentlessly wet, cloudy and dark – but not in a good way as visibility has been almost zero. Over the higher mountain passes there has been a lot of snow and challenging driving conditions and lorries getting stuck has made it difficult to stop and take some of the beautiful images I envisaged! 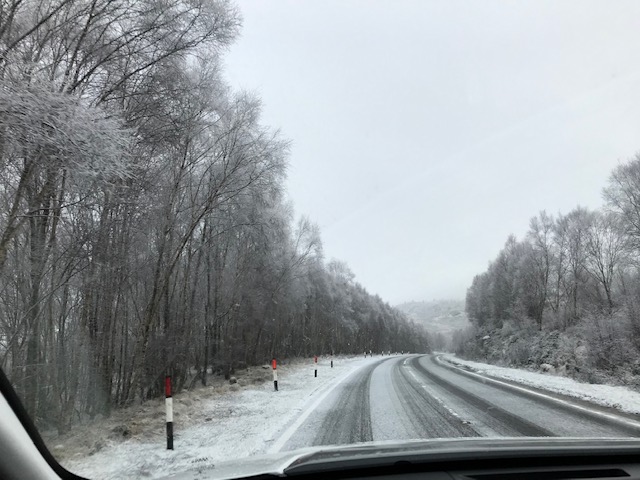 So, this week, come what may, I determined I would take some shots and decided that I would share an image with you each week, along with those that perhaps didn’t make the grade.

I should know by now, that in Skye, I should always have a camera with me and when driving back from Portree on Tuesday I pulled up to savour the beautiful light over the Cuillin range at Sligachan. Unfortunately, I only had my iPhone but nonetheless I think I captured some “keepers”: 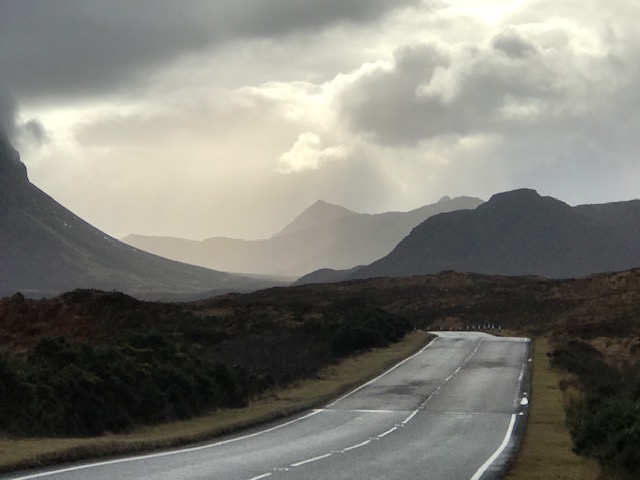 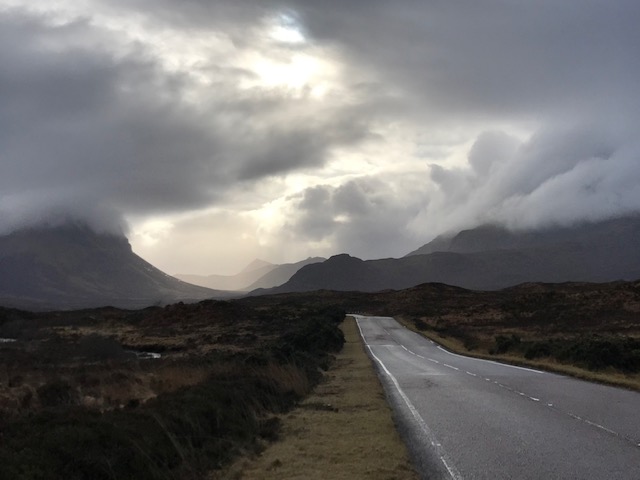 I tried a black and white conversion to get a sense of its potential as a shooting spot and how the image itself worked even though I knew I could not use this image professionally because of its poor quality: 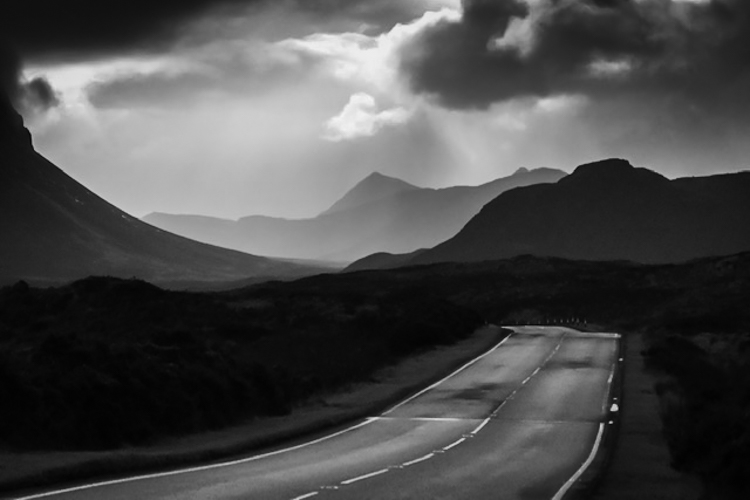 I vowed that I would return to the same spot the next day to try again and be ready to take the shot with my Nikon Z7.  And so I did. 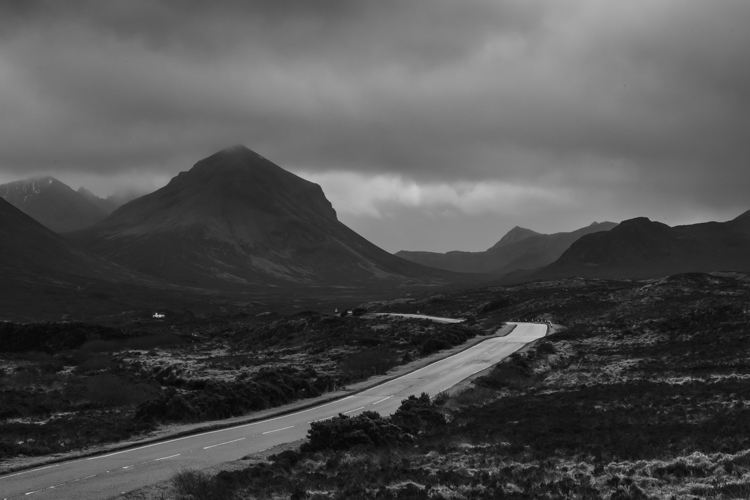 The light was not as dramatic and I struggled with lorries spraying water drops on the lens.  I tried a higher vantage point.  My intent was to get more of the curve of the road and to make the point of focus a white house tiny against the Cuillin range.  A good idea but I am not sure it works.  The road does curve around leading the eye to the white house – however I think the house is just too small in the frame.  The higher viewpoint, for me, gives a sense of looking at rather than being in and experiencing the landscape,  The wider lens diminishes the impact.  Back to the drawing board . . .

Later in the week the conditions were not ideal to return to Sligachan and try again – the cloud base was low and the Cuillin barely visible – so I decided to try to capture the story of the week from Elgol – Storm Ciara.  The storm was coming in from the south so Elgol was the perfect spot.  When I arrived the storm was buffeting the coastline but unfortunately the tide was out.  As I considered the scene it put me in mind of an image I had taken a few years ago at Niagara Falls: 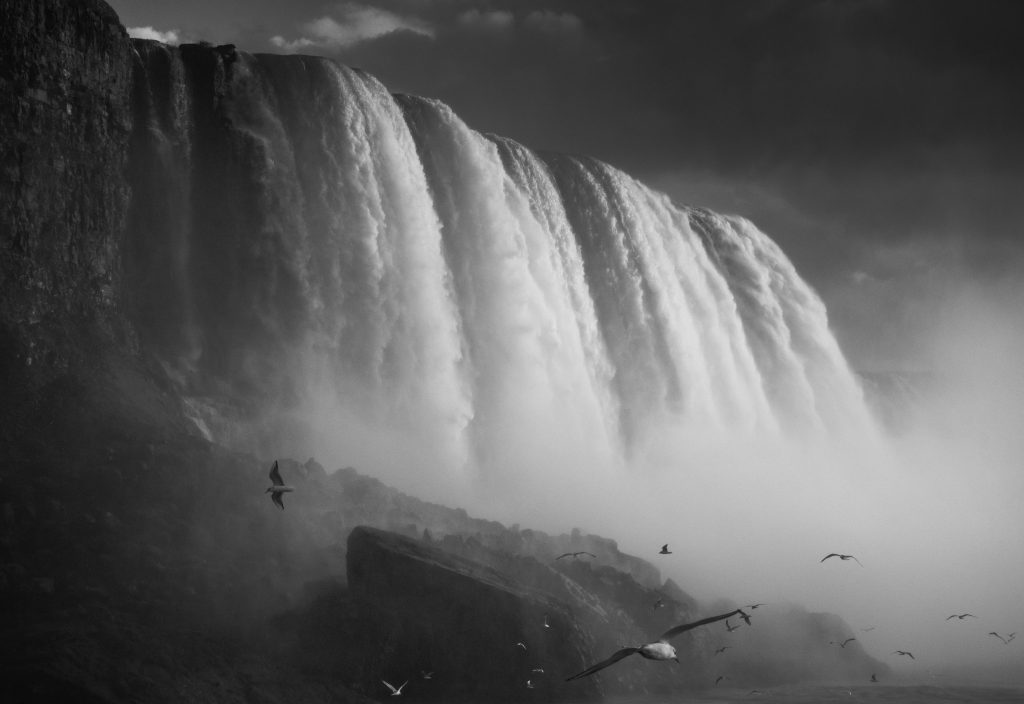 This image was all about the power of the water and the fear and excitement that evoked for me.  There was a sense of foreboding as many gulls circled around the base of the Falls.  Today at Elgol, the waves were crashing on the beach and there were lots of gulls skimming and landing on the water.  I wanted to capture, not only, something about the impending storm but also the interplay with the gulls.  So, this is my . . .

Image of the Week 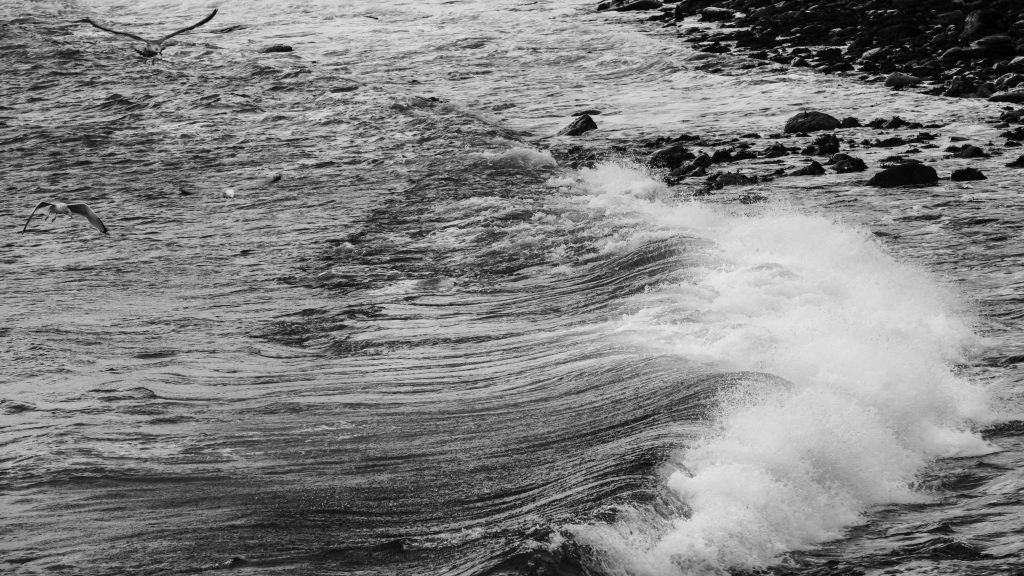 There was very little light, and I wanted to capture the movement and path of the waves so I chose a relatively slow shutter speed, just enough to capture the gulls.  This was always going to be a monochrome image as the colour was very limited and would detract from the message of the image.  I chose a letterbox shape to emphasise the path of the waves and also to crop out the rocky coastline that would take attention from the focus of the scene.  The gulls are important, not only because of the story but they encourage the viewer to stay in the picture and follow the focus of the gulls towards the crashing wave.  I chose to keep a small amount of the shoreline to give context.

My name is Alison Price and for the past ten years I have travelled the world photographing wildlife, including Alaska, Antarctica, Borneo, Botswana, the Canadian Arctic, Kenya, Rwanda, South Africa, Zambia and Zimbabwe.
← Turner - The Sea, the Alps and Loch Coriskin Looking Beyond Surface Representation →