This is a critical reflection of the second week of practice on the Isle of Skye.  Like last week, I found myself influenced by the words of someone else.  Last week, it was my second supervisor and this week the words of Jacques Derrida.  He ignored the meaning of words as given and instead tried to probe behind them and between lines of text and in doing so was seeking for:

“. . . the crevice through which the yet unnameable glimmer beyond the closure can be glimpsed.” (Derrida 1998).

I believe that this is what I am trying to achieve with my camera.

My work at Loch Cill Chriosd Week 2 started pretty much as Week 1 had ended with bad weather.  I was soaked within seconds and it was bitterly cold, but I was determined to try to capture the loch in these conditions.  I decided to allow the loch to tell its own story by using a slow shutter speed and recording the movement and turbulence. 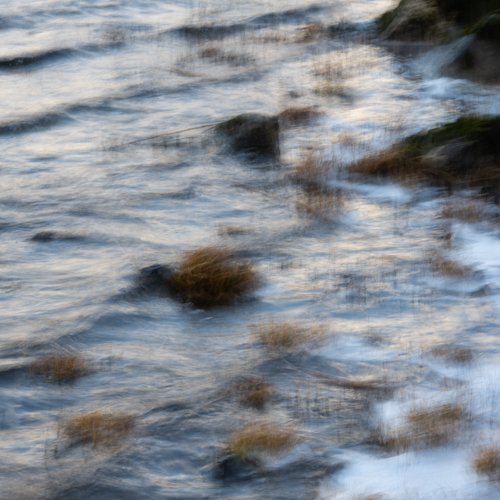 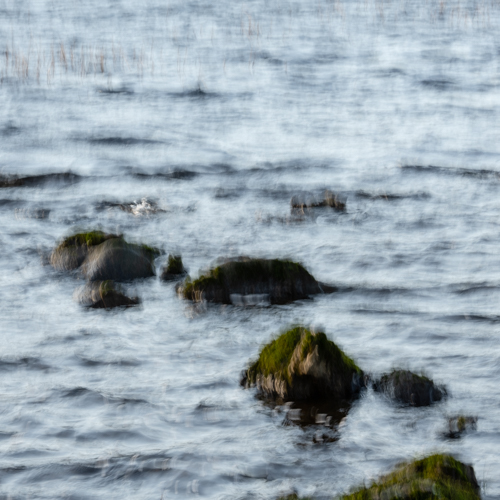 On these days, the loch becomes a chaotic place of frantic movement, the delicate reeds being battered and pummelled by the southerly wind.  Entanglement is always a word that comes to mind – as the reeds thread themselves together in infinite shapes and tangled chaos. I was immediately limited by the driving rain in terms of the direction I could stand and shoot but I could see the potential for milky water and also for capturing some of what lies below the surface of the water – the glimmer that Derrida talks about.  As I retraced my steps there were also opportunities to capture the odd shaft of light through the reeds or lighting up the delicate stems.  The images had a painterly feel to them – some resembling charcoal drawings and others almost having an oil painting aesthetic. 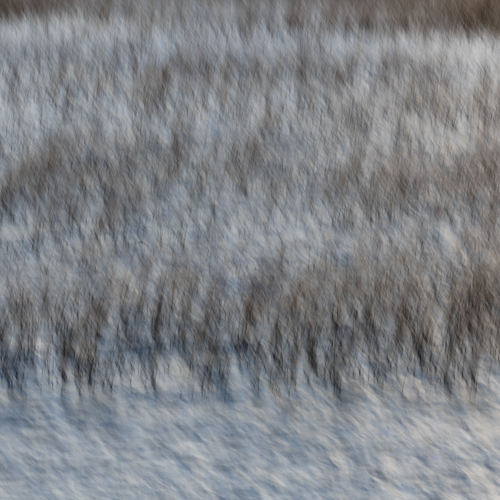 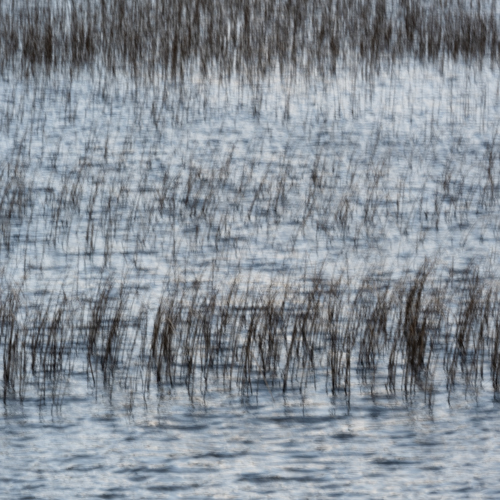 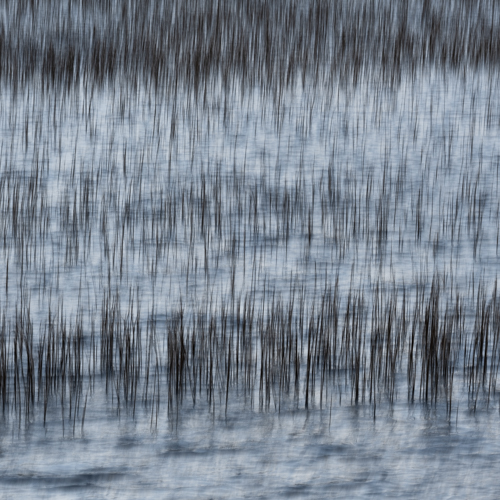 This became the theme of the week for me – how I might depict the loch and its environs by emphasising movement, re-creating the dynamics of the surface and seeking glimpses of the reeds and the water through the trees that edge the tiny loch.    In so doing, I used a wider-angle lens to give me more space to play with.  I enjoyed the freedom of not carrying a heavy telephoto lens and the opportunity to use the camera with gay abandon – almost like a paint brush.   And the images I feel, gave a sense of that lifting of some of the boundaries I had previously set in my photographic practice. 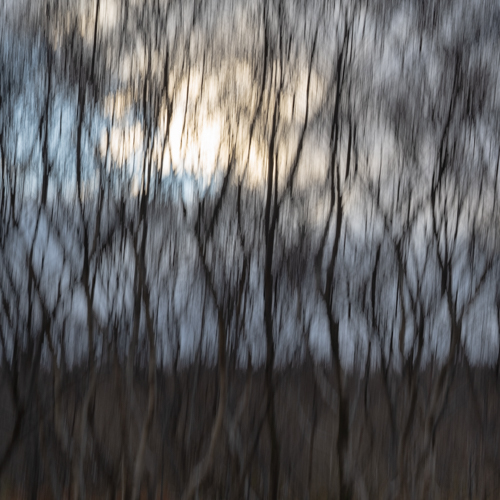 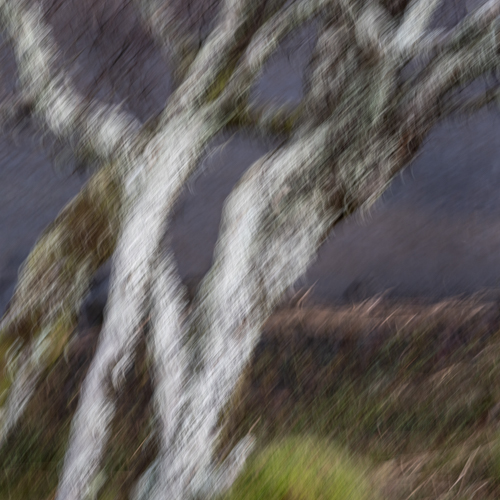 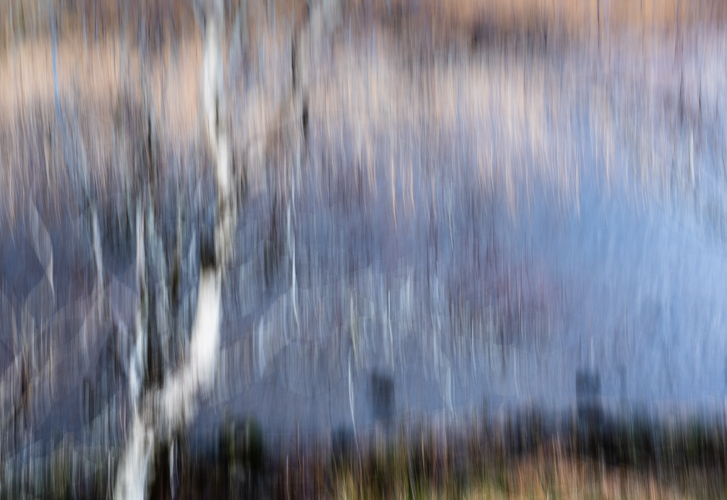 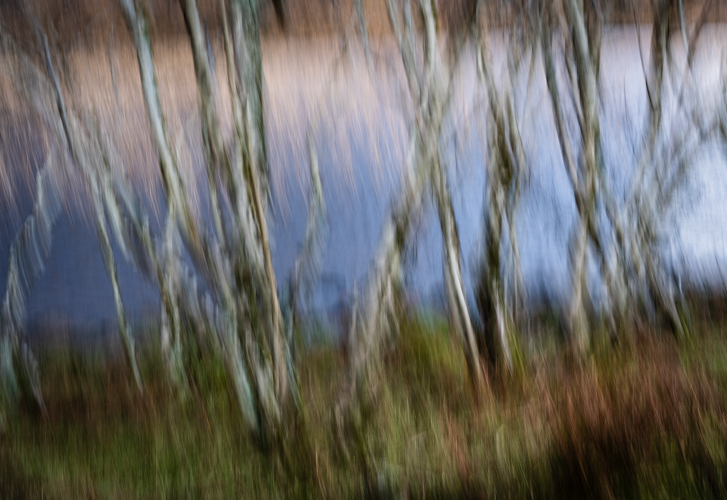 This second week of intensive practice has also been about developing my technique to refine my control of blur to give the optimum effect or the one I am seeking.  There is a delicate balance between producing an image that reflects the dynamics of the loch and its surrounding area before it turns into a photographic mashup!

Why have I chosen to do this?  Maybe the sense of the loch as I see it, and access to the crevice that Derrida refers to, is easier to do with a more evocative and dynamic aesthetic.  It is more about providing the viewer with a true sense of what being by the loch in all weathers and all conditions is like.  Perhaps, the withdrawal of the veil of presence, that sense of glimpsing the essence can better be captured with a freedom from technique and boundaries that hitherto may have restricted my practice.

Defining the Body of Work

With the knowledge that practice is to be the driver of my research and it will determine my future academic direction, this leads me to believe that clarity is needed in determining the body of work.   I will need to set boundaries, establish the intent, methodology and research methods.  Also, what are the choices I have made and why have I made them?

This current period of intense photographic practice has led me to think about the pattern I should adopt – should I work every day for a period of weeks to move my practice on and refine my research direction, or should I spend a day a week, for example, in the field to maintain a sense of flow in my work.  I think the key is to find a pattern that works for me and does not affect the flow of my academic research and writing or my photographic practice.

Returning to Research-based and Research-led Research

This week I feel I have become more immersed in my photographic practice and have had little time to think about the definitions of research-based and research-led research.  However, I listened to a talk by Annie Runkle, a PhD student, who described practice-based research as learning, through quantitative or qualitative methods, something about the wider world, whereas practice-led research is acquiring knowledge about the practice you are engaged with.  I continue to think that my research combines both approaches.

I am not sure whether it was fortunate but while out doing my photographic work, I came face to face with Heidegger’s hammer.  In Being and Time (1953) Heidegger argues that if you stand and stare at a hammer as a separate object it will not reveal the being of the hammer.  The being will only be revealed in its use – by hammering.  Furthermore, if a tool such as a hammer fails to work, for example, if the head is fractured, then it ceases to be more than the sum of its parts.  It becomes a wooden handle and a metal head but is no longer a hammer because its function has been withdrawn.

I returned to my car and placed my photographic gear in the back.  When I started the car, nothing happened.  It coughed and spluttered and then issued a series of fatal warning signals.  It ceased to be a car that I was able to drive, but a metal container with lots of component parts!