A Lesson in Attentiveness!

I head out to Loch Cill Chriosd in dull weather.  I plan to produce some drawings, not as an end in themselves but as an exercise in becoming more attentive.  I have been inspired in my photographic work by the Scottish writer Nan Shepherd, and believe she used her keen and meticulous observation, along with an ability to write about all her senses, as a gateway to a deeper relationship with the Being of the “living mountain”.  I also see drawing as an act of mindfulness, paying attention to everything that is happening in the part of the loch I choose to capture.  I am looking at this exercise as a chance to enhance my visual capabilities and ready myself for the subsequent period of photographic practice.  This is an experiment, and it is a chance to improve my skills in one of the ten signifiers of the Onion Diagram. 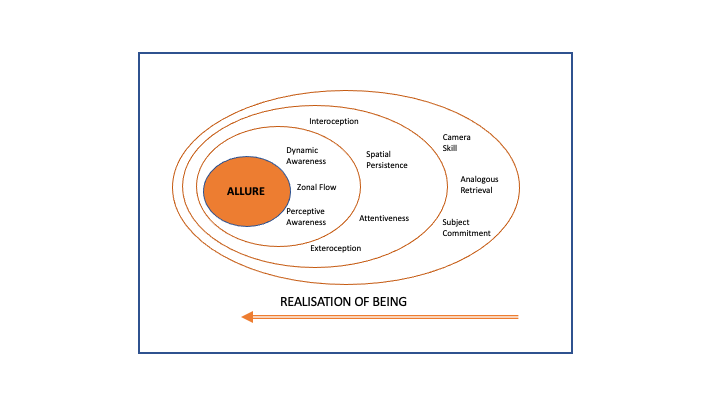 I decide to use watercolour paper rather than the pages of my journal.  The block of paper is easier to open out flat and it is larger than my A6 notepad.  I also decide to use a square format as a window on the world.  I prefer the square format for my photographic images too, as one that encourages the viewer to dwell.  I feel that my preference for a square format and often placing the subject in the centre of the frame might be considered naïve or immature, but it is authentic.  I struggle to get started with drawing.  The fear of the blank page is rather like trying to get the first words of a chapter of my thesis down on paper.  I worry that the resultant image will not be very good regardless of my decision earlier not to judge the output but rather the process.  I need to move beyond this fear of putting pen, or pencil to paper!

I find the square window I have drawn on the page helpful in framing a particular part of the loch and place some tentative marks on the page.  I like the idea of the rocks on the edge of the loch forming the foreground and the slender yet dense reeds receding into the background.  As I work, I see a turquoise flash and realise a kingfisher has landed on a reed.  It settles on its precarious perch and then hovers high above the loch.  It dives and catches a fish.  And then it is gone!  I have never seen a kingfisher on the loch before which goes to show that perhaps my attentiveness is improving.  I am exhilarated by my spot, and excited that this tiny and elusive bird inhabits the fringes of the loch.  I begin to write down some words that spring to mind as I work.  I wonder about doing some ink work to bring out the delicacy of the reeds but leave that for another day. 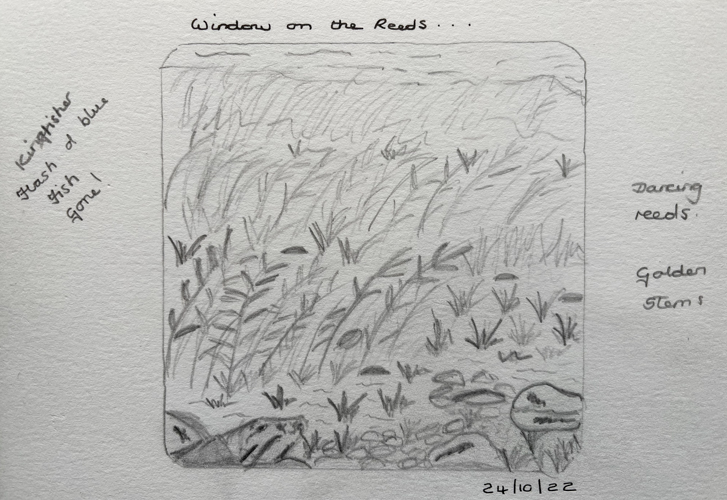 I am reticent about starting another drawing.  The same fear returns but I decide to feel the fear and do it anyway.  From the start this drawing does not feel as easy.  Having made the road the central part of the image I felt it was dominating the image rather than the more interesting trees, ferns and grasses that border it.  But I show it here for completeness.  I did not become absorbed in this second attempt, and I think the result clearly shows that lack of engagement on my part. 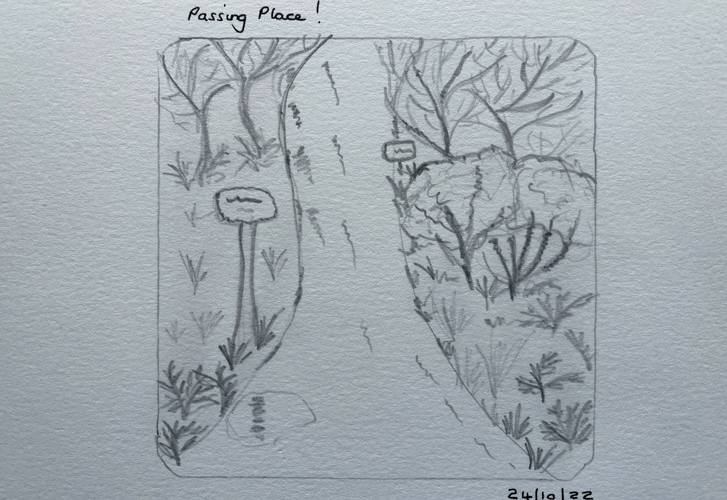 I have really enjoyed returning to drawing and using it as a way of improving my attentiveness.  It certainly worked and I look forward to more encounters with the creatures of the loch that hitherto I have failed to spot!

My name is Alison Price and for the past ten years I have travelled the world photographing wildlife, including Alaska, Antarctica, Borneo, Botswana, the Canadian Arctic, Kenya, Rwanda, South Africa, Zambia and Zimbabwe.
← Critical Review and Reflection of Collaborative Practice Period Meeting with Bookbinder (25 October 2022) →