My feedback for my Surfaces and Strategies work included a suggestion that I widen my contextual research to include looking at more contemporary landscape photographers such as Jem Southam.  Although I had seen some of his work including When the Black Dog comes Calling, I had not appreciated it relevance to my project The Road to Elgol.

Southam is considered to be one of the most important contemporary landscape photographers and works in the south-west of England. Andrew Nadolski (2013) said of Southam:

“His photographs combine patient observation of the land with personal, cultural and literary references. Appreciating his work requires patience of the view, but this patience is hugely rewarded as layer upon layer of thought is revealed in his often complex photographs.”

As part of my research I looked at his collection called The River Winter that was conceived as a means of defining what a river is through the act of photographing one. This followed a much earlier work entitled The Red River based on a small stream in Cornwall. The River Winter not only documents a river in a particular season but one that is specifically in Europe, and not only records a particular winter but reflects the impact of the many thousands of winters prior to that one.  Some of Southam’s images from The River Winter are below: 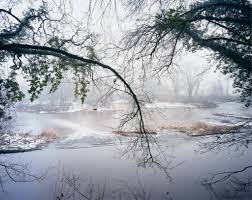 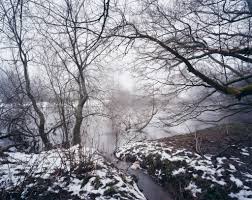 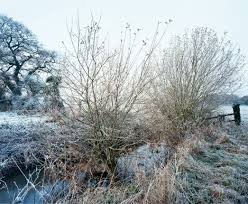 One of the aspects of Southam’s work on the river in winter is that he captures the subdued winter palette that gives his work a particular beauty. Because it is based on water the colours tend to include greys and blues and as a result reflect the particular coldness of the environment and landscape. One which is all the more effective by not capturing a pristine scene of virgin snow but one giving a sense of the rawness of frost and ice. Southam points to his reading of literature and listening to music as a long-term influence on his image making. Southam challenged himself to make The River Winter pictures in a chaotic waterside woodland environment (using a 10×8 camera and tripod) and in doing so wished to produce images “that are complex and demand a patient attention.” Southam refers to both the physical and psychological benefits of working in the landscape which also draws me to keep returning to The Road to Elgol . As Southam says:

“How much more fun, how much richer can life get, than when we are all in various ways and in our various sites out walking and working with our cameras.”

He also sees his use of a cumbersome camera as a challenge and a means of slowing down the process of image making.

Unlike Southam, I do not use a film camera but prefer using a digital camera and all the challenges that brings.  In doing so I choose to use the freedom that offers me, to contemplate the landscape in a slowed down way in the hope that my viewers might share some of my experience of The Road to Elgol. I choose to use my time in a different way.

I find Southam’s work inspiring in a number of ways.  His quiet contemplation and way of working contributes for me to the feeling you get that you are alongside him in the landscape.  You get a clear sense of what the day was like, how dark and grey it was and the cold that he was enduring to get his images.  Over time and seeing different vistas you get a real sense of what it might be like to walk along the river and in the woods alongside.

Previously in this blog I mentioned the work of Roman Loranc concentrating on tules https://www.romanloranc.com/.  In some ways similar to Southam in terms of focusing in an environment close to water.  At that time I suggested that one of my micro projects for Sustainable Prospects might be based around Loch Cill Chroisd on The Road to Elgol.

This exploration of Southam’s work has also encouraged me to consider the use of a muted autumn/winter colour palette and all the opportunities that brings to capture this stunning time of year on the Isle of Skye.

My name is Alison Price and for the past ten years I have travelled the world photographing wildlife, including Alaska, Antarctica, Borneo, Botswana, the Canadian Arctic, Kenya, Rwanda, South Africa, Zambia and Zimbabwe.
← My Local Exhibition Video - The Road to Elgol (Week -1) Responding to Feedback - Deconstructing Elina Brotherus' Work (Week 1) →