My tutor suggested I consider and review the work of Pentti Sammallahti, a Finnish photographer who works in black and white.  The first images I viewed were candid shots of animals in the landscape.  His work struck me immediately as sharing a moment in time and his use of dogs in particular portrays the shared nature of the natural world with a gentle humour.

Sammallahti describes himself as a wanderer who likes the nature of the great north, the silence, the cold, and the sea.  He likes the people and the animals of far off places and he records the relationships between them and their environment.  He is a craftsman of his art and produces beautifully toned prints and has re-introduced the portfolio form and published photographic art.

Grace Glueck writing in The New York Times says of his work:

Francis Hodgson in the Financial Times:

“Pentti Sammallahti is a Finnish photographer who represents the coming together of two rather old-fashioned tendencies.  A traveller specialised in the far north, he makes toned black and white prints that are never specifically about anything much.  He’s a reporter on the human condition rather than on any particular subset of it.  But he’s really an ‘auteur’ photographer, to borrow a term from the cinema.  He makes pictures that are the expression of his sensitivity and of his mood – a kind of work that has been somewhat eclipsed by the more project-based photography we are familiar with and which is designed to fit into books.

Sammallahti’s pictures are exquisitely beautiful according to the old canons:  they have rich tones, elegant proportions, subtle and revealing compositions.  To dig out another old word, they are Pictorialist images. In which the object itself is a thing of beauty, and not only the sights it describes.” (Hodgson 2012).

Hodgson goes on to speak of Sammallahti’s animal pictures ranging from the touching to the hilarious and referring to his street photographer’s awareness for picking out tiny moments that complete and perfect the scene.

For me, his images are fable-like where the animals act as guides.  They have a tableaux quality such as the images below: 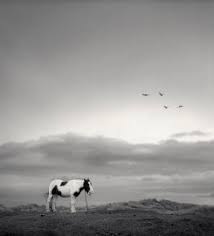 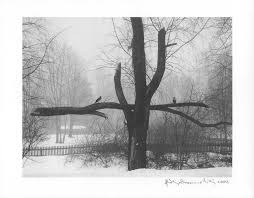 He has an amazing ability to capture the mundane and make it beautiful.  He photographs scenes that the less curious of us would miss and pass by.  His work gives the impression of someone at one with the landscape and the world.

Like this image below.  I cannot stop looking at it:

His images are pictorial but what is wrong with that?  They give a sense of a bygone era and the struggle the people and animals have to survive in the harsh landscape.

Some of his images are free of human or animal presence: 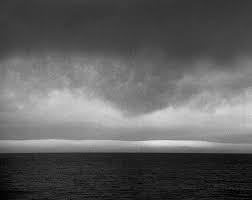 I love the simplicity of this image, the tonality and use of light to create a sense of the impending storm.  Like me Sammallahti waits for bad weather:

“I wait for photographs like a pointer dog.  It is a question of luck and circumstance.  I prefer winter, the worse the weather, the better the photograph will be.”

I couldn’t agree more on this point.  I wait for that moment when everything comes together and I too love the winter light and landscape and being out in wild weather.

I have found Sammallahti’s work inspiring and he has given me some reassurance to stay on the path I have chosen to take – in making black and white images, primarily for high-quality print and books.  There is a lot I can learn from him.  He seems to have a nose for picking out a small detail – the punctum – that brings the whole image together.  He is not afraid to wait for this moment.  He is also not afraid of making pictorial images and his darkroom work and production of his images is top quality.  Brilliant!

My name is Alison Price and for the past ten years I have travelled the world photographing wildlife, including Alaska, Antarctica, Borneo, Botswana, the Canadian Arctic, Kenya, Rwanda, South Africa, Zambia and Zimbabwe.
← Constructed Realities and Hunters and Farmers (Week 3) Trying some ideas on the Road to Elgol (Week 3) →