Our coursework this week is about Constructed Realities.  In this context we have been asked to consider whether photographers might deceive in their image making and whether we construct ‘reality’ or deceive in our own photographic practice and whether we are a ‘hunter’ or a ‘farmer’.  We are also asked to consider the balance between the objective and subjective in our work, the relationship between the technological and the creative – is it a dichotomy or a continuum and how does the viewing context influence this relationship and whether this is important in our work.

Similarly, Sontag (1977) recognised the interpretative nature of the photographic image as a subjective construction: ‘Although there is a sense in which the camera does indeed capture reality, not just interpret it, photographs are as much an interpretation of the world as paintings and drawings are’.  (Sontag 1977:6).

As part of our coursework this week we have been asked to consider constructed images of varying kinds and to determine whether we believe them to be lies, to what extent they are fictional and the methods used to interpret the world.  We are also asked to illustrate our reflections with examples from our own practice.

During the break I became acquainted with the work of Cindy Sherman and Jeff Wall and the world of constructed images.  I found Sherman’s work to be conceptually interesting but rather bizarre and found myself wondering why Jeff Wall could not take the image in situ and take his chance as an opportunist street photographer rather than constructing large sets to replicate, for example, a night club scene.

Creating fictional realities is interesting but not something I have done.  Smith and Lefley (2016) explain what a constructed photograph is:

“To construct means to build or make by putting together various parts. A constructed photograph is one that is formed by bringing together discrete elements to create a final picture.”

This week’s lecture introduced us to a number of photographers using different constructing strategies.

I was taken with the dream-like world of Sandy Skoglund in which she creates stage sets incorporating the role of designer, sculptor, photographer and director.  Unlike, Walls images, these are clearly created as images of pure fiction.  The images almost have a cartoon, film-like quality.   In my view, they are so obviously constructed, there is clearly no intention to deceive in her work. and therefore they are not a lie. 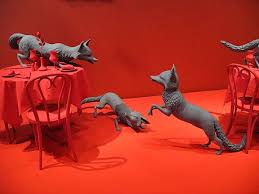 Miriam Backstrom, a conceptual photographer, is best-known for her empty interiors and cliched cosiness in IKEA showrooms – what might be termed “faux rooms.  Again, she is explicit about what she is doing so I do not believe there is any deception. 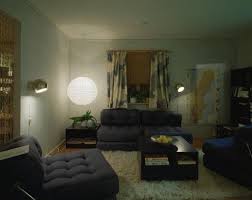 IKEA through the ages – Miriam Backstrom 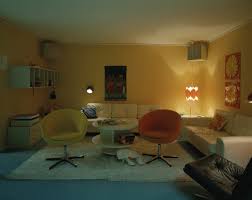 IKEA throughout the Ages – Miriam Backstrom

Kate Spade’s Autumn/Winter 2002 ad campaign entitled Visiting Tennessee tells the story of an east coast family visiting their eldest daughter in New York City – they are not a real family on a real visit.  The images taken by Larry Sultan were constructed to convey a lifestyle.  For me, this is more deceitful or potentially so.  However, most people viewing an ad campaign would expect actors to be playing the roles.  This is common practice. 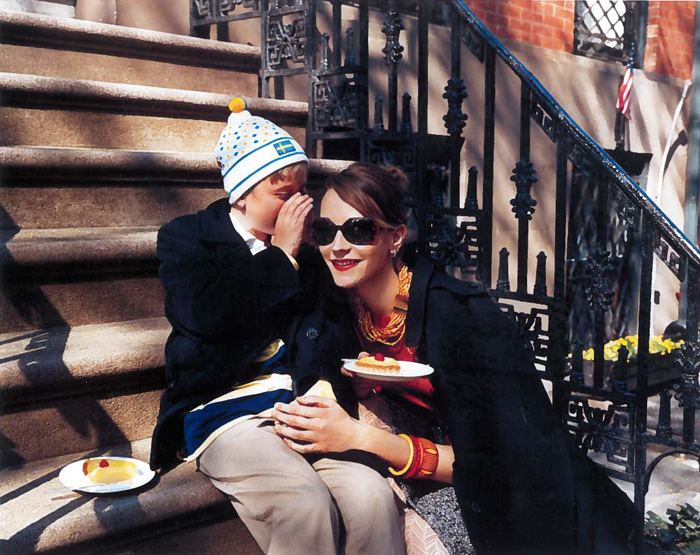 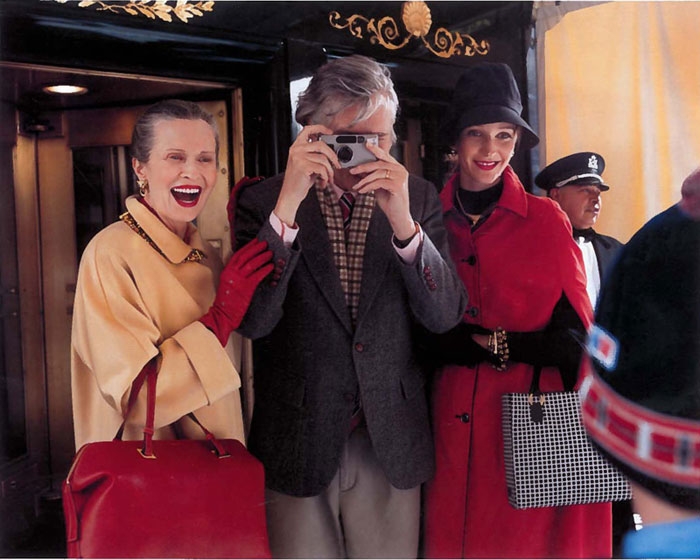 We also viewed an image of the Nazi Alfred Krupp (1963) by Arnold Newman who was a Jew.  He built a set in which to take Krupp’s portrait.  Newman spoke of Krupp as “a devil” and portrayed him as such in the image through lighting and pose.  For me, this calls into question to what extent portrait photographers present their impression of a person and to what extent that can be considered a lie.

Notwithstanding the largely explicit methods and strategies of these photographers Grunberg explains that even with this prior knowledge and understanding we often mistake the constructed for the real:

“Photography is the most stylistically transparent of the visual arts.  Never mind that advertising has taught us that photographic images can be tricksters:  what we see in the image is often mistaken for the real thing.” Grunberg (1989)

Construction in my own work

In my reflections piece from last week I discussed the constructed nature of photography in the context of my own photographic practice https://wp.me/p9BvX0-rY  The construction of my work is confined to shooting choices and a small number of post-processing decisions.  As a police photographer and having done History as my first degree my world is about facts, evidence and truth.  Recently, I have extended my work to what I would term semi-abstract images but I am not straying far from what I might term a ‘real’ image, rather using metaphor to emphasise my message or the emotions and feelings I want to share with my viewer and choosing details in the landscape to depict these.

As far as the photographers discussed above are concerned I do not believe they lie, after all the ‘real’ or ‘truth’ in photography only exists in that brief moment when the shutter is pressed.  The image does not tell us what the world was before or what it became.  Personally, I find the ad campaign more disturbing – why?  I am not sure given we are all quite clear about how the advertising industry works today – or are we?  The overt fictional images of Sandy Soglund transcend into fantasy whereas the portrait of Alfred Krupp is informed and crafted by the photographer in a significant way.

I think whether a photograph is considered a lie depends upon the openness of the photographer, what the image is used for and in what context it is received.  The danger is that an uninformed viewer might casually view an image and consider it as ‘real’ when it is not.

Charlotte Cotton clarified the meaning of these terms – a hunter tracks down and captures the subject matter as prey and the farmer cultivates, constructs and tends to his image over time.  I find these categorisations quite loaded in their interpretation particularly as I would consider myself as primarily a hunter!  The description is loaded in its comparison with animal hunting while the definition of a farmer is positive and constructive.  I find the words of Price helpful here:

“The camera may be thought of as comparable to the eye.  The difference is that the camera is not more than the eye.  It does not think.  Any connection with judging, choosing, arranging, including, excluding and snapping has to be with the photographer.” (Price 1994:4).

As I discussed in previous posts even my photographs, as a hunter, are constructions and not merely traces.  I would argue that, like the farmer, I cultivate, construct and tend to my image over time.  I spend extended periods of time in my chosen location, I sit for hours taking in the natural world, writing in my journal and waiting for the moment where my emotions, memories, feelings and the frame of the subject come together before I press the shutter.  I return to particular spots, I view my subject in different weather conditions, light and seasons.  I consider this to be cultivating and tending in pursuit of the image.  Whilst my work is not staged in the way Jeff Wall creates his images, I do wait for the staging of the natural world to reflect and capture my intent.

Balancing the objective/subjective and technological/creative

Linda Hutcheon (2003) suggests that contemporary photography “exploits and challenges both the objective and the subjective, the technological and the creative.”  (Hutcheon 2003:117).

The notion of the subjective and the objective is based upon a hierarchical ontology or, the idea that 50% of ontology is tied up with our thoughts and 50% with the rest of the world.  This, many philosophers refer to as ‘correlationism’, and as Graham Harman (2018) puts it:

“If it strikes you as implausible that human beings – however interesting we may be to ourselves – deserve to fill up a full half of philosophy, then you are already on board with OOO’s (object oriented ontology’s) critique of modern thought.” (Harman 2018:51).

OOO, or Speculative Realism as it is commonly known and discussed dissolves the distinction between subject and object and builds upon the Kantian/Heideggerian concept of the noumena – the hidden being or the ‘real object’ as opposed to the phenomena – the ‘sensory object’.  An object in OOO is defined anything ‘that is irreducible in both directions: an object is more than its pieces and less than its effects’ (Harman 2018:53). Consequently any object is both a real object and a sensory object.

Following from the distinction between the real and sensory objects and their real and sensory properties we gain an insight into the power of photography to achieve a linkage between the sensory property of the image (which is itself both a sensory and a real object) and the real object which is the subject of the image.   It achieves this, Harman argues, primarily through the power of art.   Science and technology can break down a physical object into its component parts but in so doing undermines the object.  Likewise critical theory can undermine an aesthetic object upwards by unpicking its properties in terms of its effects on others.  But neither science nor critical theory can penetrate the noumena of the object we can only gain a glimpse of the real object – the noumena – through metaphor.  This brings me to the nub of what I believe my photographic practice is increasingly about and that is to use photography and the images I produce as a metaphor that points to the real objects to which it is related in two ways: first, to me as the photographer and, second, to my subject.

Turning to technology and the creative: in the light of what I am saying we form a relationship with the camera.  Technology has brought it into existence and it is an object which again is more than the sum of its parts and is not reducible to them.  It is also less than its effects and our creativity comes from our ability, through our relationship with that technology, to expand its effects through the images it creates.  There is, in my view, no challenge between the technology and the creative – in photography they are co-generative and with both we can open up our exploration of the world and its meaning to us.

My name is Alison Price and for the past ten years I have travelled the world photographing wildlife, including Alaska, Antarctica, Borneo, Botswana, the Canadian Arctic, Kenya, Rwanda, South Africa, Zambia and Zimbabwe.
← Reflections on Informing Contexts (Week 2) Pentti Sammallahti (Week 3) →