For part of our coursework for Informing Contexts this week we were asked to look at Trilogy (2003/2103) by Daniel Gustav Cramer.

We were asked to consider the nature of the development of Trilogy as a long-term project, how effective we believed the edit of his work to be in the three areas – Woodland, Underwater and Mountain, any contextual or critical ideas that could be applied to Cramer’s work and any ideas that might apply to our own photographic practice.

I found the consideration of Trilogy very interesting in the context of my own photographic work for Informing Contexts.  Cramer uses three subjects in the natural world as the focus for his work.  Immediately a similarity is clear with my work as I have used a number of subjects such as a tree, mountains, water as the basis of my Work in Progress Portfolio.  Cramer does not include any traces of human presence in his work and focuses tightly around the subject, which leaves us without a sense of place or geographic location.

Galleria Carla Sozzani (2007) in their Press Release for the Exhibition explain the intent of Cramer’s work as follows:

More interesting for me, Cramer refers to his work as about abstraction as follows:

“Using photography to document nature as an Abstractum works so well because the medium connects us with what we can see with our own eyes and, at the same time, it excludes a part of reality, the one that remains outside the picture.  Therefore, nature presents itself as both real and abstract.”  (Cramer in Parisi, 2010:56).

I also work with different techniques that allow me to abstract essential elements of my subjects.  As well as using the frame as a means of removing extraneous elements I also use exposure, light (and dark) and movement to take away distracting and unwanted aspects of the natural world.  However, our motivations for doing this are different.  In Cramer’s work there is no sense of narrative, and his images are very flat in order to emphasise the almost primeval power of nature.  His focus is on the middle distance to give a feeling of a timeless non place.

Perhaps the most revealing quotation from Cramer himself and the most significant in terms of my own practice is as follows:

“For every revelation there is an equal and opposite concealment, down to the elemental questions of whether we are looking earth or water.”  (Cramer in Parisi 2010).

So, his photography is about revealing and concealing in order to gain the effect and focus upon the important elements of his image.  Cramer’s work is about creating a sense of mystery – where are we, what are we looking at and what is beyond.  In some images, particularly the Underwater set it is sometimes difficult to work out what the image is depicting.  And that is part of the point, I think.

I reflected on this point about photography being an act of revealing and concealing further.  I have been very clear in my work that I am about revealing the essence of my subject.  However, in choosing to take the image in the first place I have made choices about what to reveal by including it in the frame and what to leave out by concealing.   Having done this, through various techniques largely in camera, I choose to emphasise certain aspects of the image – to reveal its true essence – my experience.

On first reading of the quote from Cramer above I felt that his photography was more an act of concealment rather than revelation and that in this sense it was almost a negative intent.  And, for me, I felt my work was a positive act of revealing something. However, maybe this is another continuum along which we all sit, and that we all reveal and conceal in varying measures.

Cramer likes to create a sense of mystery in his work and I also do this both in terms of choosing abstractions from a wider landscape but also in leaving some aspects to the viewers’ imagination.  It is for the audience to experience what it is like to be, say a tree, in the wild landscape of Skye.

“They are paradoxical things, landscapes without a land, abstract representations.  They are full of stories and have no stories at all, they revel in telling us that they have nothing to tell.”  (Darwent 2007).

It is part of Cramer’s intent to leave a sense of the unknown and in doing so leaving the story unclear.  Whereas in my work I like to think there are lots of stories about say, a lone tree, living on a hillside.

As an extended piece of work (extending over ten years) with three parts to the presentation the choice of images for the Trilogy was very important, alongside the need to ensure consistency in aesthetic and tonality.   It proved extremely difficult to obtain any images of Cramer’s work on the internet, so I have used a couple of screenshots from out lecture to give reader’s a sense of the imagery:

As I come to the end of Informing Contexts, I am starting to think about how I will choose and display my images.  I normally print out a series of images and hang them in my study so I can live with them for a while.  I then make my final choice – in terms of aesthetic, tonality, placing on the contact sheet and general considerations around putting a panel of images together..   In previous modules I have used the diptych format and sequential display.  On this occasion I intend to display my images like a contact sheet for each section of my work – rather like Cramer: 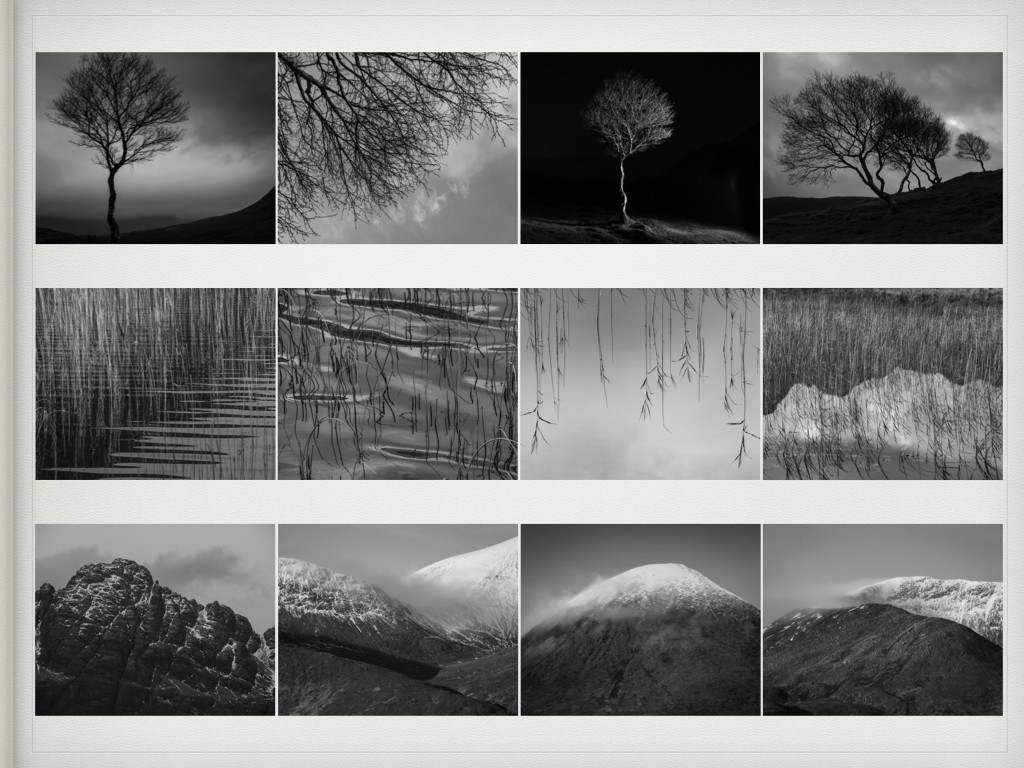 I will also include a short Preface to introduce my work.

This has been a useful piece of coursework for me although I was already aware of Cramer’s work and Trilogy in particular.  It has also given me a helpful example of how a critical review of photographic work should be conducted.

My name is Alison Price and for the past ten years I have travelled the world photographing wildlife, including Alaska, Antarctica, Borneo, Botswana, the Canadian Arctic, Kenya, Rwanda, South Africa, Zambia and Zimbabwe.
← Visiting the Don McCullin Exhibition at Tate Britain (Week 10) Working in Skye - Day 2 (Week 10) →