Having done the reading and listened to the various presentations I started on my first challenges relating to the Week 1 theme of The Global Image.

Our first task was to photograph the view from our window. We live overlooking a picturesque valley in the Cotswolds but it was a grey day with a lifeless sky. However, as I was pondering how I could approach the task I saw a murmuration forming in the sky. It wasn’t very big but it was nonetheless spectacular and the birds began flying right over the house. I took some shots but was not happy with them because of the white sky. I mused that they would have been much better if we had had one of the amazing sunsets we frequently see looking across the valley to the west. The next night I was lucky and took the shot. 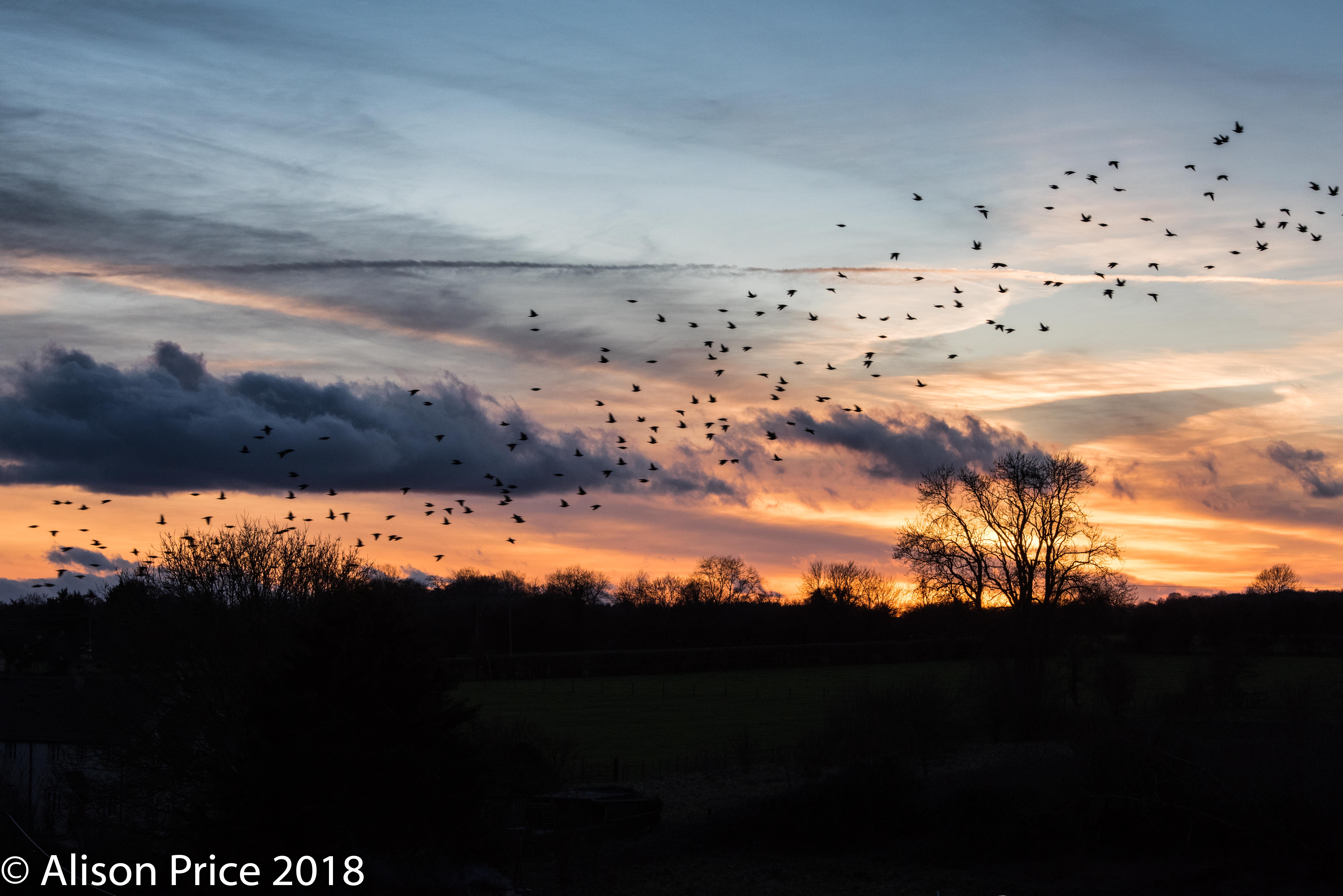 Our second challenge was to remake a global image. After a lot of thought I decided to choose an image taken in Antarctica by Sebastiao Salgado – “Chinstrap penguins on an iceberg located between Zavodovski and Visokoi Islands, South Sandwich Islands”.

My take on the picture was an image I made in 2013 whilst visiting the same region. Salgado’s image had been taken in November and whilst his photograph depicted the penguins on virgin snow there was no snow for my penguins leaping into the water. My photograph was taken off Baily Head, Deception Island, Antarctic Peninsula. 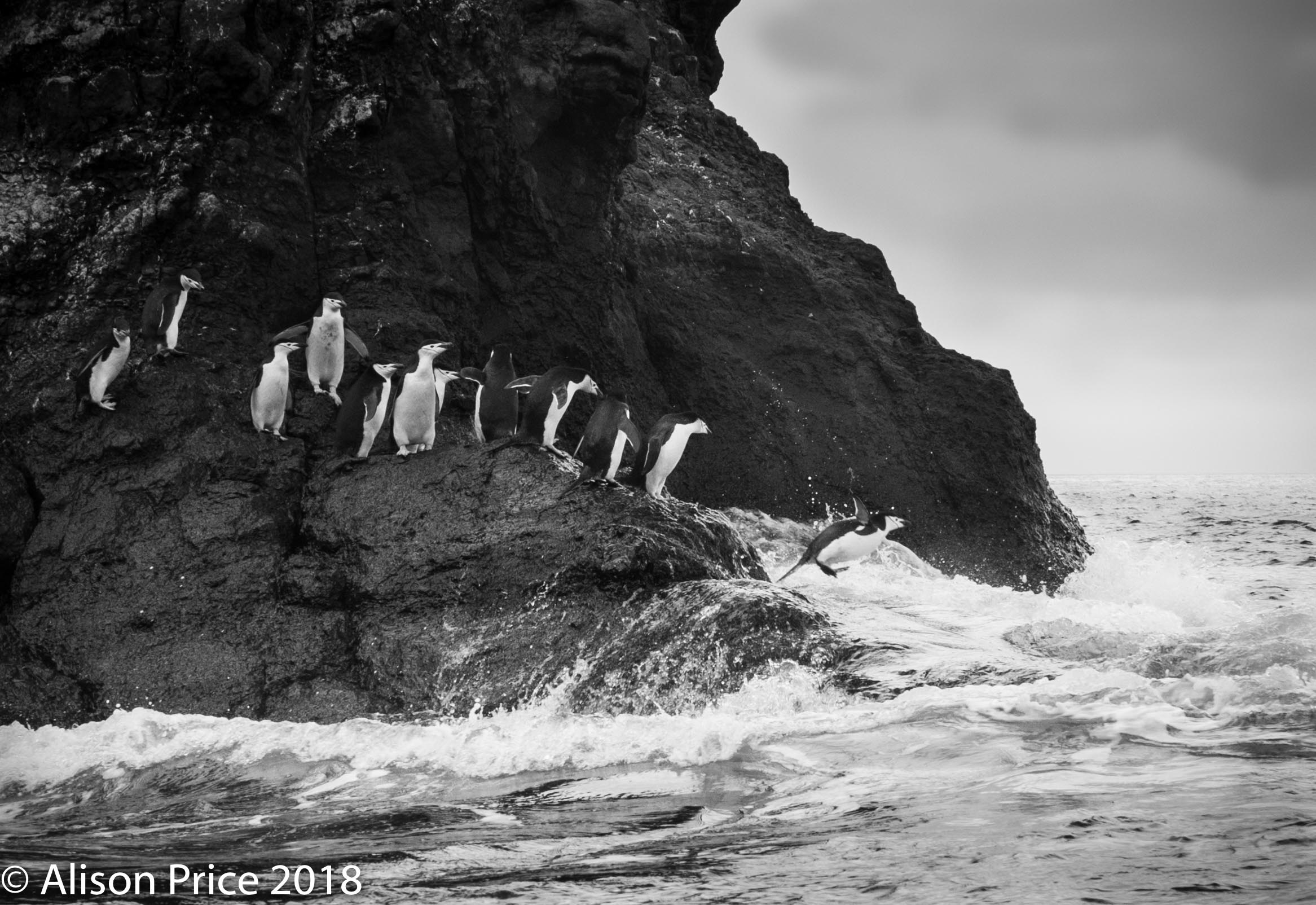 Our final task for the week was to present three images we felt were appropriate for the theme of the Global Image. My first image was taken in the Falkland Islands and shows a small group of Magellanic Penguins at Gypsy Cove. I was particularly drawn to the shapes and colours of this image. Unfortunately for the residents and visitors this is one of many inaccessible beaches because of the danger of the spoils of the Falklands War.  To me this has a very direct relationship with this week’s theme. 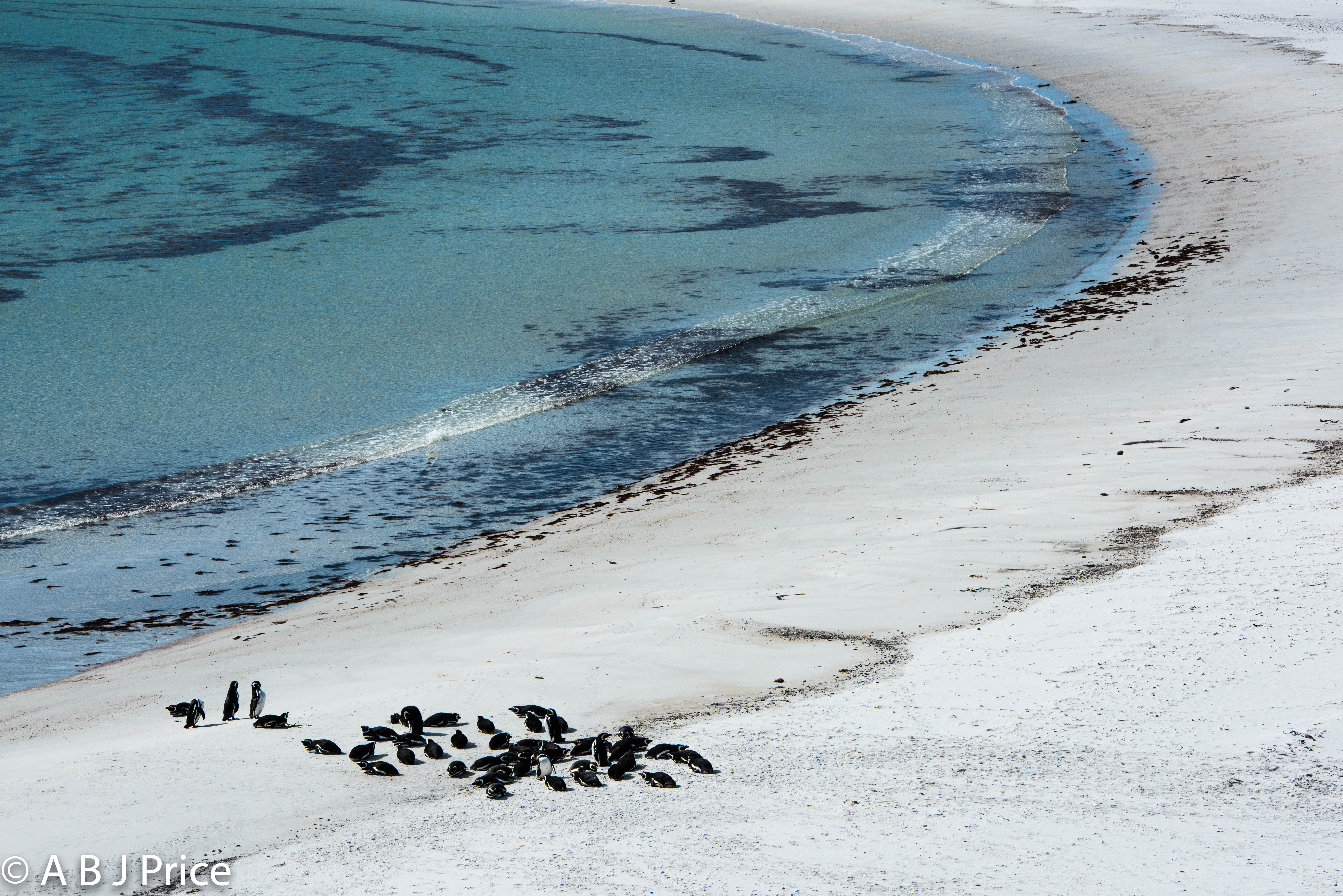 My second image is another photograph captured in the Falkland Islands at West Point and was our first landing point on the trip. We visited an area where Black Browed Albatross and Rockhopper Penguins co-existed side by side in grass tussocks. Both of these birds are classified as endangered. 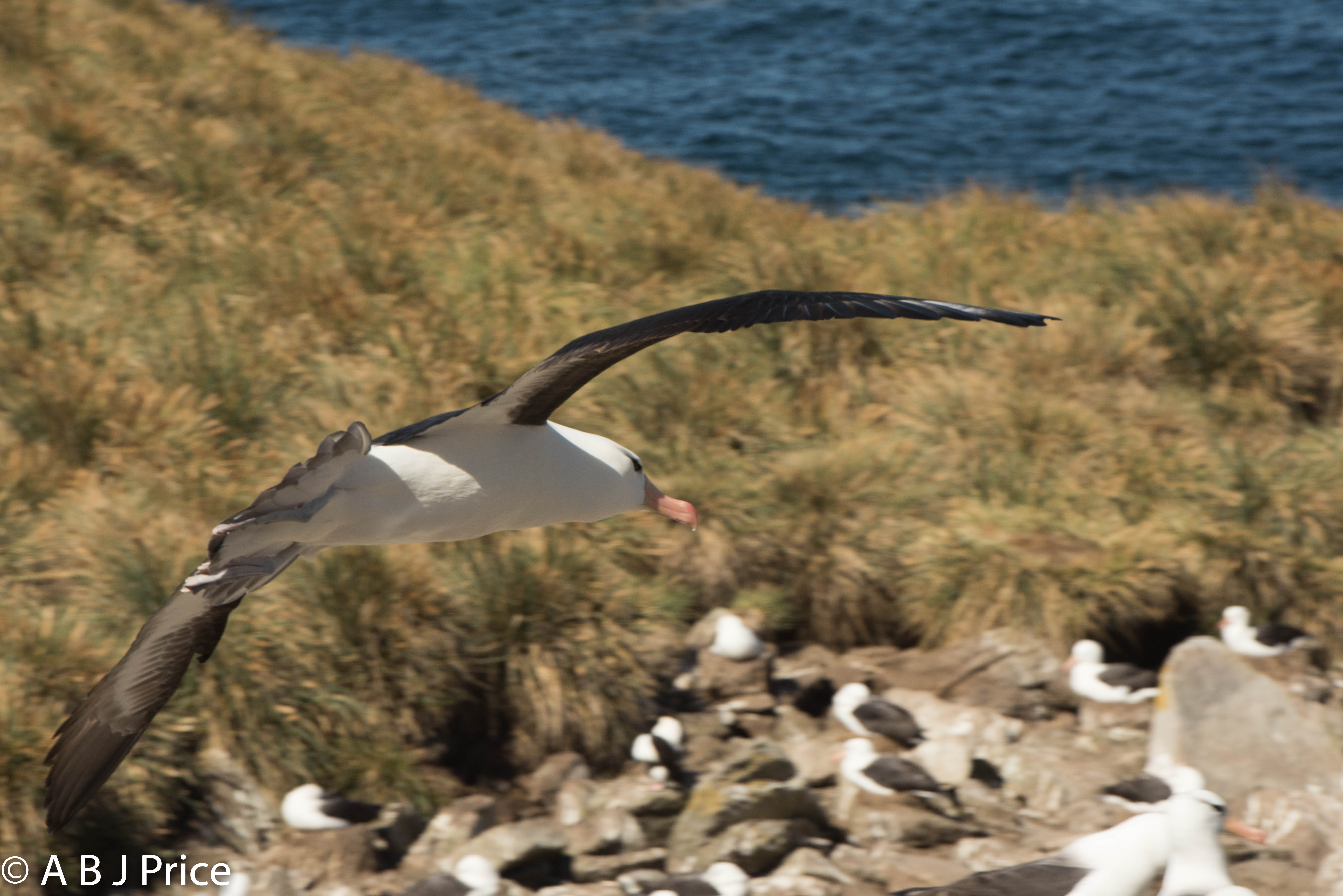 My final image of the week is a landscape shot taken on Antarctica itself rather on the Antarctic Peninsula where most of our landings were. We had landed expecting to be taking birds so I only had a 400mm lens. However, plans were changed, as they often are on these trips, and we found ourselves in a zodiac looking at the beautiful ice formations. The colours in Antarctica are stunning and this image for me reflects the wilderness and the fragility of the far south. Although our journey south was cut short because of too much ice, the reports of reducing ice in Antarctica are all too frequent. 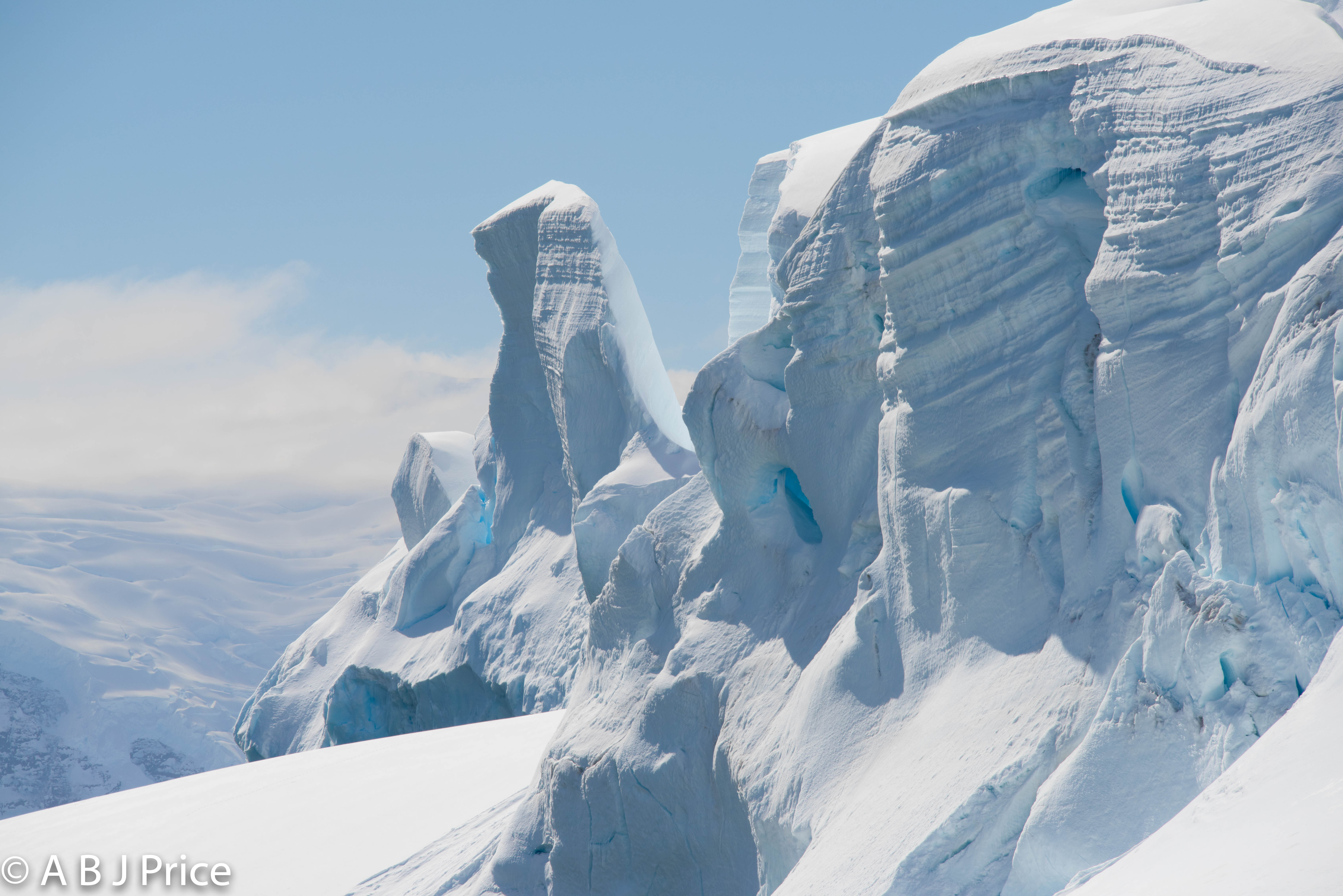 Looking forward to next week . . .

My name is Alison Price and for the past ten years I have travelled the world photographing wildlife, including Alaska, Antarctica, Borneo, Botswana, the Canadian Arctic, Kenya, Rwanda, South Africa, Zambia and Zimbabwe.
← Who Am I – as a Photographer? (Week 1) First Thoughts on my Research Project - The Road to Elgol (Week 1) →