Turning my Back on Phenomenology (Week 24)

As I work on my Critical Review of Practice I am finally crystallising my thoughts in terms of my personal ontology and how that influences and informs my photographic practice. During the modules of my MA I related my work very firmly to a phenomenological approach but as I finished Informing Contexts I was starting to feel that my experience of the object was not what I was seeking and that thinking was limiting my creativity.

Before I joined the MA, I spent over a decade photographing wildlife across the globe. I took candid portraits and later wider images of animals in their environment. I seemed able to get behind the literal and appeared to gain a connection with the animals that I photographed – my images were more about the essential properties, rather than record shots. Looking back, I believe I was trying to get to the essence of these animals and to gain a glimpse inside their inner worlds. But why did I do this and why did this skill emerge? Maybe it was my police training or maybe it was related to my history degree – both had instilled in me the need to record things meticulously, collect evidence, draw conclusions and tell stories on that basis. Probably all of those, but my reflections throughout the MA suggest that it is borne out of being an introverted personality, happier with my own company and the quiet and solitude that brings. It appears that I have an innate ability to see beyond that which is in front of me and record a world that many people never see – whether it is through my wildlife photography, my studies of lochs, mountains or trees or any other subject I choose to capture.

“The soul never thinks without a picture.” (Aristotle) 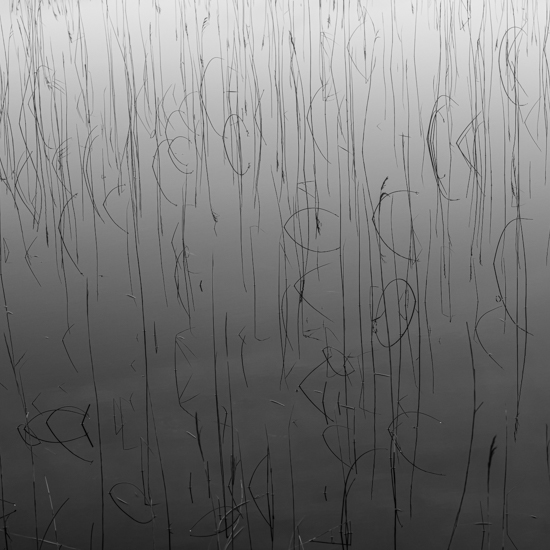 The Ephemeral Hiddenness of Skye, my Final Major Project (FMP), focuses on detailed aspects of nature and spending time alone in the landscape allows me to reflect on my own inner life: the hurt and fracture – confronting the chaos of death and destruction during my time as a police photographer; the remnants and vulnerability of my youth and the solitude of adulthood when parents are gone. I use aspects of the natural world as metaphors for my feelings and emotions and use light and shade, luminosity and depth, shape and structure as a means of revealing the Skye that most visitors rarely see, and locals often fail to notice.

In Informing Contexts I wrote:

“Looking through the lens of my experience I see the sea, lochs, mountains and moors – these are Skye’s sensible properties – and these images are captured by many photographers on Skye – simple, visual and literal representations.   For me, these types of images serve no ultimate purpose. It is not these I am seeking but those that transcend individual experience – the ‘otherness’ of its geography, the vulnerability of its ecology and its ephemeral hiddenness” (Price 2019:1).

I am searching for those passing moments, glimpses, transitory states when Skye reveals itself to me: its mystery, fragility and resilience – its essence. But, it is more than that. I see the Island as a metaphor for me – whilst being very solitary and contemplative and vulnerable as an individual, I am also very resilient and strong in the face of life’s challenges.   Skye satisfies a desire in me to get beyond the surface.

I seek to exploit the aesthetic voice of the camera by realising its fullest potential to capture what I would describe as the ‘eternal moment”. In my view, unlike any other art form, the camera has the ability to translate, recognise and record the eternal moment. That is why I make my images in camera and do not subsequently seek to transform or idealise the reality of that moment through post-processing.

I have drawn inspiration and insight for myself and my photography by exploring the work of others through the multiple lens of critical theory. Fundamentally, my approach is informed by Aristotle and Kant and the more recent thinking of Heidegger (1962), Latour (2005), Meillassoux (2014) and Harman (2018). These writers have guided me in my search for that which is withdrawn behind the veil of presence while Silverman’s (2015) writings allow me to express the ineffable nature of the Island’s being through analogy and metaphor. The Spanish philosopher Jose Ortega y Gassett’s words are a powerful reminder to me that what we look at defines who we are:

During the early stages of my work (Price 2018) I referred to my practice as phenomenological photography reflecting the ontological position of philosophers such as Kant, Husserl and Heidegger:

“I appreciate that my photography does not fit a neat genre – the way I choose to describe it is ’phenomenological photography’, where what matters is not the object of my experience but my experience of the object.” (Price 2018:3).

Later, I questioned my own summary of my work and practice feeling it had developed beyond my previous description and that a phenomenological framework to my work was holding me back:

“However, this phenomenological approach – whilst challenging – became an uncomfortable philosophical constraint. Like well-worn shoes it appeared to fit, except there was grit in the sole. That grit was the reality of Skye that transcends personal experience and insists on being noticed.” (Price 2019:1).

Some things did make me uncomfortable about the undoubted insights of the philosophical ‘greats’ I had leaned on for support and inspiration in terms of explaining my practice.  The way I read them is that ‘being’ or ‘presence’ in other objects, whatever they are, is always relative to the conscious mind doing the experiencing.   Whereas my personal ontology is based on a fundamental belief that reality lies out there, within the object. My photographic practice is about trying to reveal the world behind the image, whether I am photographing aspects of the landscape or wildlife. It is not a search for meaning in a classical sense but is more about revealing to anybody that looks, the essential nature that lies below the flux of senses.

The ontology that I have turned my back on presents a lopsided view of the world that Quentin Meillassoux terms ‘correlationism’ – the idea that being can only ever be understood in terms of a conscious subject. This view of the world has been challenged by a growing number of philosophers, who whilst working in the phenomenological tradition, are abandoning correlationism and adopting a ‘flat ontology’ where being is inherent in all objects – within each that being, the real object, can be glimpsed but never fully revealed.  Every object is also a sensory object, and this is the object we experience.   The ‘real object’ has its ‘essence’ being the emergent property which makes it more than the sum of its parts, and in photography we have a powerful tool in glimpsing that hidden aspect of its being.

I reflected on this uneasiness in ontology as I engaged in an intensive period of image making and experimentation with the camera in the first stage of FMP.   The long periods I spent by Loch Cill Chriosd with my camera and writing in my Photographic Journal allowed me to coin a more apt term for how my work has developed and how my practice has evolved – ‘noumenological photography’ (derived from the noumena of Kant’s writings) – trying to penetrate the essence of things.

So I have travelled full circle but now feel my practice is informed and influenced by an ontology that allows me to be authentic and true to myself.

MEILLASSOUX, Quentin. 2008. After Finitude: An Essay on the Necessity of Contingency. London: Bloomsbury.

My name is Alison Price and for the past ten years I have travelled the world photographing wildlife, including Alaska, Antarctica, Borneo, Botswana, the Canadian Arctic, Kenya, Rwanda, South Africa, Zambia and Zimbabwe.
← Silchester - An Unexpected Professional Assignment (Week 24) Nearly Two Years' On (Week 25) →