In this week’s coursework we have been asked to consider the work of Sebastiao Salgado alongside the photography and rephotography of Nick Brandt and to consider the approach, aesthetic, delivery and presentation of their work. To what extent do they achieve their intent and how effective is their message and impact?

As a long-time admirer of Sebastiao Salgado’s work I have written about him a number of times in this Critical Research Journal. Indeed, in Week 1 of Positions and Practice, our first module, I wrote in a blog entitled In Defence of Salgado https://wp.me/p9BvX0-N I have a Salgado print hanging on my wall as I write this post. 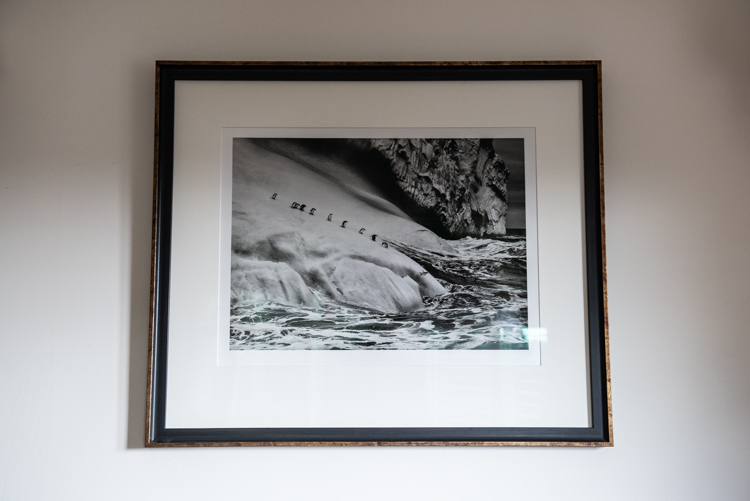 So, I am coming from a positive position in terms of this week’s work and am enjoying reading some of the more negative views of Salgado’s work, and in particular Genesis (2009) and reminding myself of Nick Brandt’s Inherit the Dust (2016).

Parvati Nair begins her book on Salgado, A Different Light, as follows:

“The photography of Sebastiao Salgado invariably evokes response. There are those who leave his exhibitions with tears in their eyes and those who feel somehow ennobled, yet humbled, by the images they have seen, as if the pathos and the splendour of these visions of human struggle, and above all human survival, had touched their brow with an extraordinary brush of light.” (Nair 2011:1).

On the other hand, Ingrid Sischy writing in The New Yorker (1991) in Good Intentions, concludes her article on Salgado with the following:

“The manufactured poetry that is so dominant an aspect of his aesthetic could turn the people in the Sahel into emblems on greeting cards for all of us who want to express our humanity. These photographs are less than their subjects deserve. We can be sure that if truly appropriate images should ever surface they will not be so “beautiful” that they could work as packaged caring. Salgado’s sentimentalism, for all its earnestness, isn’t any kind of breakthrough. Unfortunately, his champions aggravate the bullying quality of his work by presenting it as if it were the Second Coming.” (Sischy 1991:95).

Whilst recognising the quality and “weightiness” of Salgado’s imagery and his standing as “the photo-journalist of the moment” Sischy’s criticisms to me are based around the curation and presentation of An Uncertain Grace and Kuwait Epilogue, Salgado’s manner and visual rhetoric, and more particularly the disparity between his intention and results and the intense beauty of his images in the context of his subjects.

As far as the exhibitions were concerned Sischy spoke of the unusualness that a photo-journalist should be exhibiting in a museum referring to the prevailing categories of fine art photographers, commercial photographers and news photographers, with those not in the first category being “less” worthy than the fine artists. But, it was the promotional tone of the presentation that riled Sischy, in terms of the display of magazine articles about the artist, his biography on a placard resembling an after dinner speech, the public listing of his awards and the captions that had a pseudo-educational tone. Added to this:

“The cult of appreciation that has developed around Salgado sets him up as a photojournalist whose pictures have a transforming power over, say ethnocentrism, racism, and classism.” (Sischy 1991:90).

Sischy refers to Salgado’s self-styling as:

“a spokes-photographer for forgotten people and also for soon-to-be-lost ways of life – a worthy ambition, but one, unfortunately, that resists the oversimplified yet heavy-handed means by which he attempts to achieve it.” (Sischy 1991:90).

The manner of Salgado, as Sischy sees it, is reinforced by his visual rhetoric that she describes as weighty and weightily presented – through his strong compositions, cropping, lighting, angles and toning. Salgado’s imagery also has religious symbolism and story telling. Many would argue that this it what gives his imagery such power and impact but others might see it as overwhelming.

In Sischy’s view, the portraits from the Sahel in Africa, are where the disconnection occurs most strongly in Salgado’s work between his intentions and results – that is to reveal the inhuman scale of the tragedy of famine while also retaining and capturing the dignity of the people. A very significant challenge. 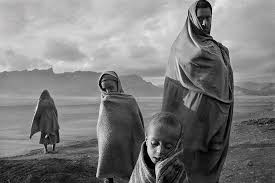 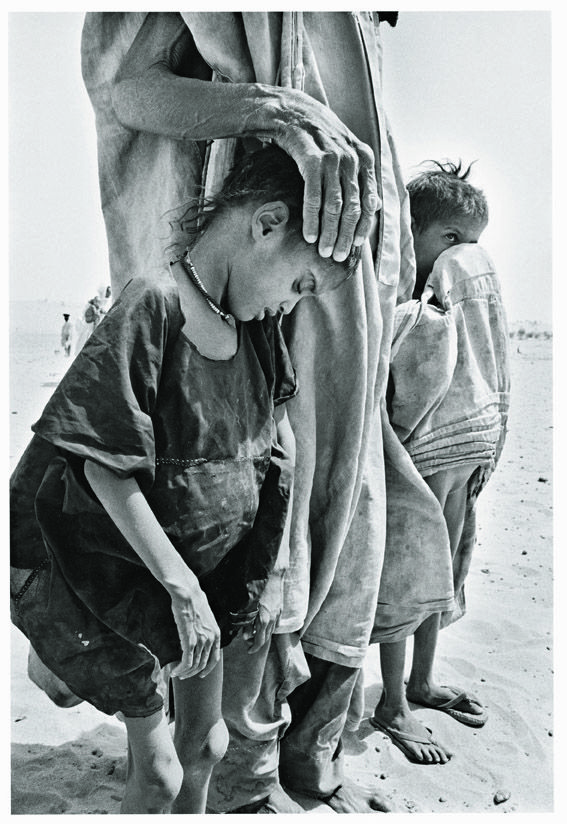 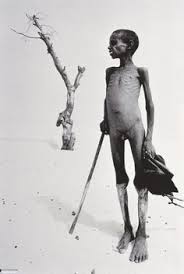 But, Sischy goes further in claiming that Salgado is a photographer combining high aspiration and presumption. In his intent Salgado was influenced by W Eugene Smith and it seems quite clearly affected by his words:

“I frequently have sought out those who are in the least position to speak for themselves. By accident of birth, by accident of place – whoever, whatever, wherever – I am family. I can comment for them, if I believe in their cause, with a voice they do not possess.” (W Eugene Smith in Sischy 1991:91).

This, for Sischy is at the heart of the ‘self-aggrandising’ of Salgado’s photography. Furthermore she points to a sense of naivety in his ability to guard against stereotyping and a lack of sensitivity for how aesthetic and technical decisions might skew how a photograph is viewed and how the subject might feel.

So, at the heart of Sischy’s criticism in Salgado’s work is the overwhelming beauty in his imagery. He tries to capture the beauty in the midst of poverty.

“But beauty as a formula – and this is what it has become for Salgado – is as much of a cliché as what he’s trying to avoid, and as artificial as any other blanket approach.” (Sischy 1991:92).

He is more concerned with finding that beauty and grace in his anguished and suffering subjects. The outcome of this approach Sischy argues, is that they serve to reinforce the viewer’s passivity:

“To aestheticize tragedy is the fastest way to anesthetise the feelings of those how are witnessing them.” (Sischy 1991:92).

“Sischy’s real complaint about Salgado’s photographs is that they threaten the boundary between aesthetics and politics.” (Levi Strauss 2003:5).

In the past my interest, and indeed inspiration has come from Salgado’s wildlife and landscape images. When I saw the Genesis Exhibition in 2013 my attention was taken largely by the images of Antarctica and South Georgia where I had recently visited.

To my mind, Genesis had too many images and became overwhelming both in the ways that Sischy refers to in terms of his style but also in the breadth of his subject matter. As a consequence I paid little attention to the portrait images that have been the vent for so much of the criticism about Salgado’s work.

Much of the criticism of Salgado, and Sischy’s in particular, revolves around his images of the Ethiopian Famine of 1983-85 and his beautification of the tragedy. Susan Sontag, also a critic of Salgado, said of his work Migrations that maybe the epic scale of his individual images and the global scale of suffering contribute to a feeling of helplessness:

“Taken in thirty-five countries, Salgado’s migration pictures group together, under this single heading, a host of different causes and kinds of distress. Making suffering loom larger, by globilising it, may spur people to feel they ought to ‘care’ more. It also invites them to feel that the sufferings and misfortunes are too vast, too irrevocable, too epic to be much changed by any local, political intervention.” (Sontag 2002).

But, if you look at some of his images of the Rwandan Genocide of 1984 I believe you see a much more gritty and photojournalistic approach: 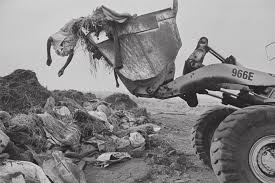 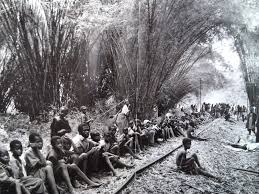 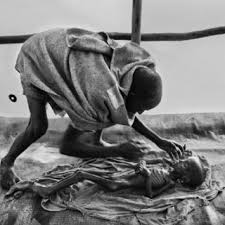 In my view, as Sischy acknowledges, Salgado’s Exhibitions in 1991 were mounted at a time when the heyday of photojournalism (of which he was such an influential part) was over. In marketing and commercial terms, his ability to be able to gain space in the most influential galleries and museums of the world enabled him to “crossover” into a different artistic space. However, this focused the critics on consideration of his work in a different context (ie the gallery and exhibition space) and his retrospective compilations of his work such as Migrations enabled them to focus and criticise his work in a way that his photo-journalism images were never subject to at the time. His ability to transcend the artistic divide and exhibit his images in this way is testament not only to his image making but also to his commercial sense. Unfortunately, this ability and skill to “crossover”, a bit like we see in the music world, leaves Salgado at the mercy of both camps and the envy of many.

There is no doubt that Salgado’s images have a beauty about them even when the subject matter is weighty.  His compositional skill, the use of light and tonality and the outstanding quality of his print images contribute to an aura – a personal style.  One can never be in any doubt of the photographer when viewing a Salgado image.  Maybe there is a question about whether in giving his images this sense of beauty he always achieved his very considerable intentions in his work immediately.  However, the extent, tone and personal nature of some of the criticism and the fact that the debate about his work continues to this day proves to me that he has achieved his intent  and great standing as a contemporary photographer.

Moving on to the work of Nick Brandt, I was lucky enough to hear him talk, however before he had produced his hugely successful Inherit the Dust project in 2016. 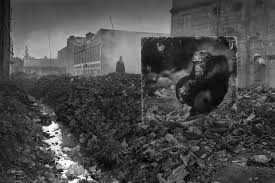 My immediate response to this work is to acknowledge its hard-hitting message that human habitation is taking over the land once occupied by wild animals.  I find Brandt’s accompanying commentary very poignant and clear in articulating his intent.  The message is unequivocal and placing the life size images in the landscape adds to the narrative.  For me, in comparing Brandt’s approach and style with Salgado, it seems from a different era.  However, one must be cautious in this comparison as much of the criticism of Salgado’s work is of his portrait work rather than his wildlife and environmental imagery.

I have really enjoyed this week’s lectures and research.  I have spent many hours on this blog and wish I could have taken more time over the subject matter.   For those of you still reading I apologise for the length of my post!

My name is Alison Price and for the past ten years I have travelled the world photographing wildlife, including Alaska, Antarctica, Borneo, Botswana, the Canadian Arctic, Kenya, Rwanda, South Africa, Zambia and Zimbabwe.
← What is the Intent of my Photographic Practice? - Developing my Ideas (Week 8) Reflections on Informing Contexts (Week 8) →