During the transition from Sustainable Prospects to Informing Contexts we were asked to consider the work and practice of Cindy Sherman.  Whilst recognising the significant amount of work and care Sherman displays in producing her images, through the creation of fictitious characters, backgrounds and narratives, I found myself questioning why?  However, I did enjoy her untitled film stills created early in her career.  Whilst having some reservations, I was keen to visit her retrospective Exhibition at the National Portrait Gallery in London. 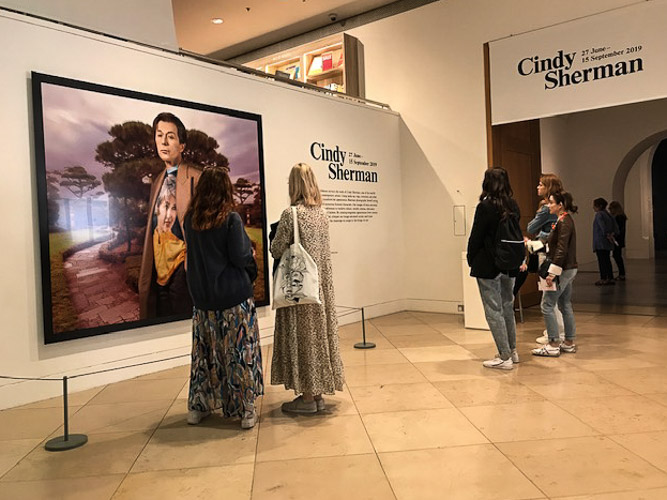 The Exhibition was large with significant numbers of photographs, mock up studios and small rooms displaying particular periods of her work in different ways.

The entrance to the Exhibition included some of Sherman’s recent work entitled Harper’s Bazaar (2016-18) commissioned by the fashion magazine of the same name.  Sherman photographed herself wearing various well-known brands including Prada and Chanel.  She used digitally-created backgrounds to present her invented characters that attend fashion shows and provide the main spectacle:

“I just loved the description of these people, these characters who go to the fashion shows – and twirl.” (Sherman: 2019). 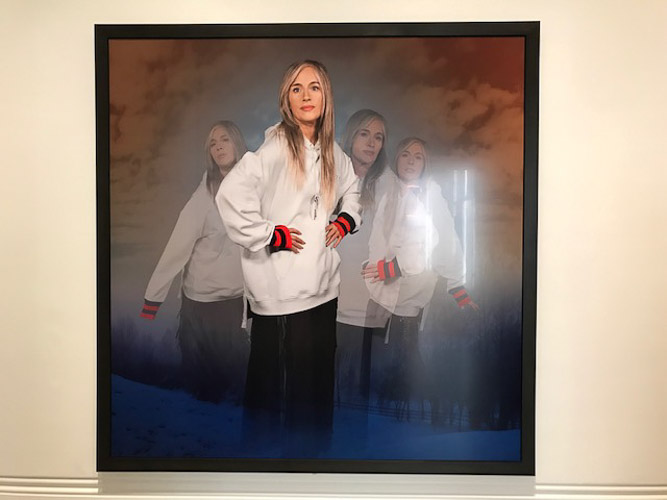 After this modern introduction we returned to some of Sherman’s most iconic work including Untitled (Murder Mystery People) 1976/2000 and her Rear Screen Projections and Centerfolds (1980-81): 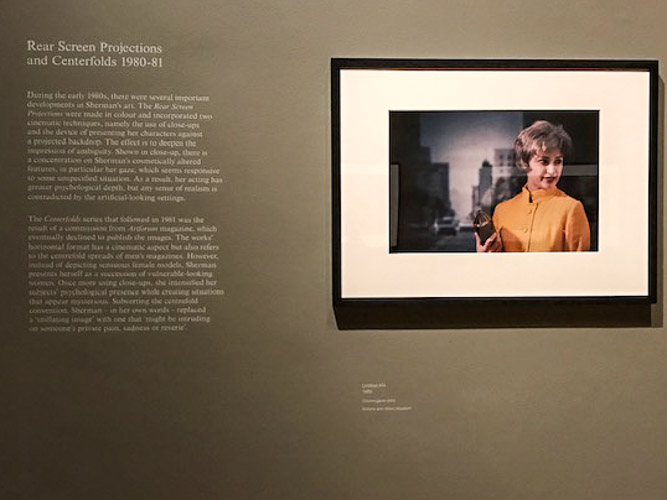 Then onto Pink Robes and Color Studies 1981-2.  These images by Sherman were rather different to some of her earlier work in being much more tightly-cropped around the persona, providing little context and using rich colour hues which made them particularly striking: 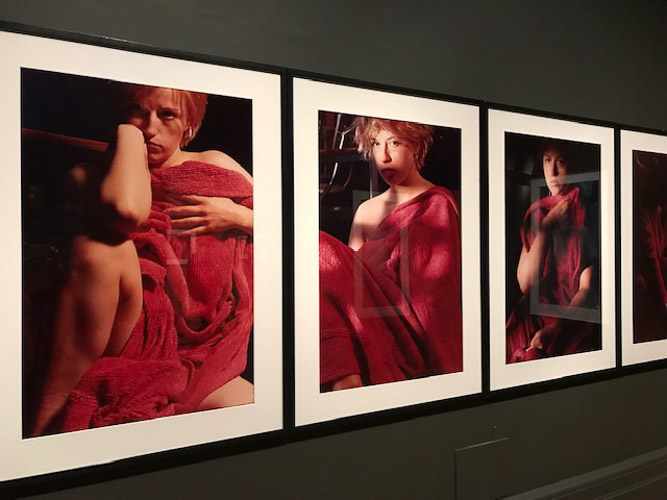 However, for me, the highlight of my visit was getting close to her Untitled Film Stills (1977-80).  The work produced after her move to New York in 1977 combines Sherman’s fascination with changing her own appearance to create fictitious personae, combined with the introduction of an implied but unspecified narrative.  She aims for a neutral expression and unidentifiable locations leaving the viewer to speculate.  Sherman seeks to engage the viewer by inviting their individual interpretation.

Paul Moorhouse (2019) (senior curator at the National Portrait Gallery and the Tate), writing in the RPS Journal, whilst being initially convinced by the Untitled Film Stills, becomes less so on closer examination, detecting an impression of Sherman acting for the camera:

“With meaningful gazes and often fraught expressions, each actress activates a scene believable yet, somehow not real.  The cinematic nature of the images has an alienating character; the falseness of the vignettes becoming tangible.” (Moorhouse 2019:420).

But surely this is the point!  Moorhouse goes on:

“Realism is never the intention; her characters, situations and their mode of presentation are fabricated to emphasise surface appearance.  We are never in doubt of Sherman’s ubiquitous presence behind the sham, a fact underlined whenever different works are viewed collectively.  However, as if to eliminate any possibility that the people in her images could be mistaken for real individuals, Sherman has increasingly adopted strategies alerting us to her wilful fakery.”  (Moorhouse 2019:420). 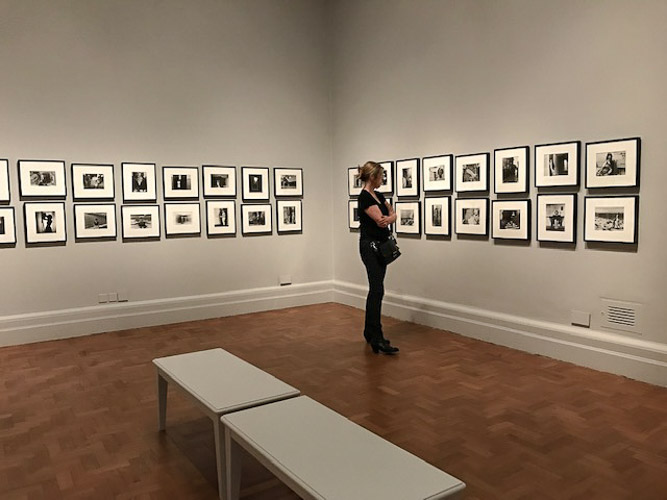 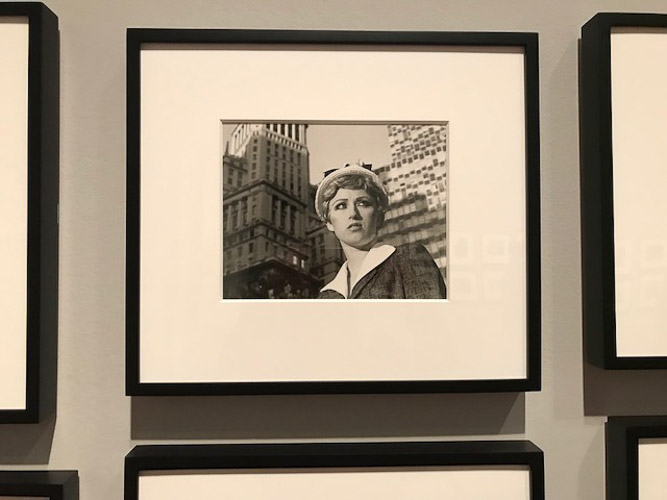 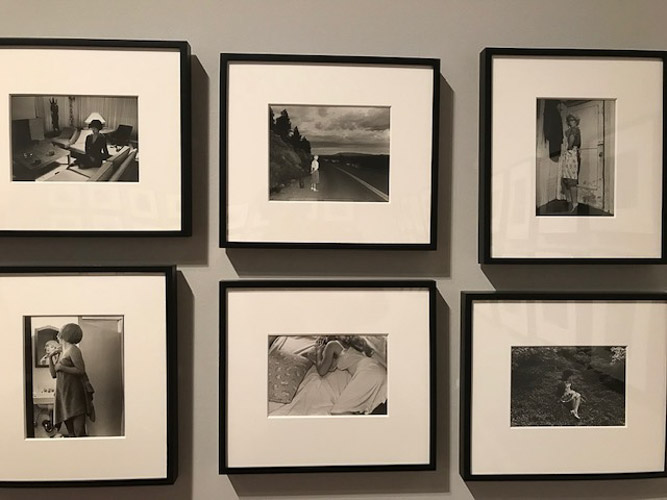 There is so much that I could discuss and so many images to view in the Exhibition, but the other collection which I particularly enjoyed was Clowns,  1994-2008.  As the title suggests this was a period where Sherman experimented with transforming her appearance through the use of masks.  The images are bizarre and colourful and the features are artificial and inscrutable.  In the Clown series the images have a sinister aspect to them too. 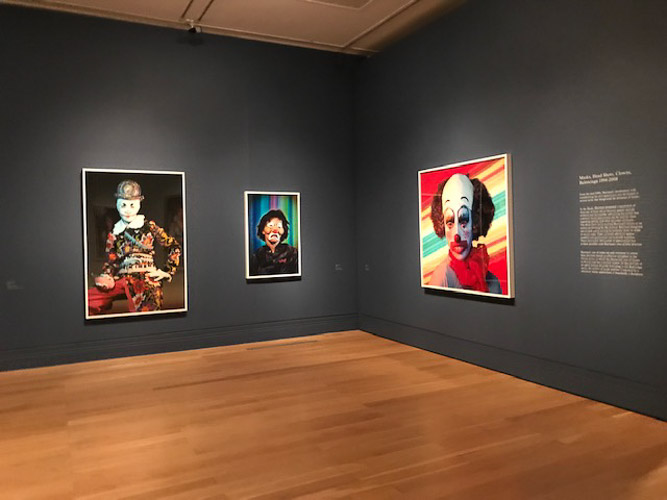 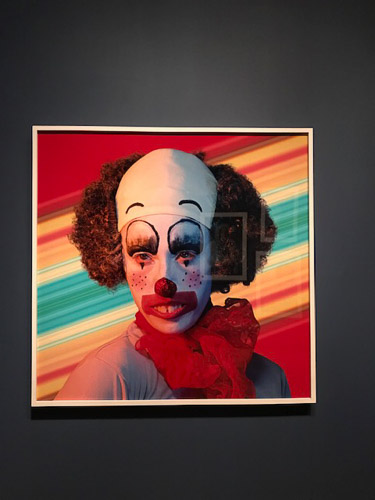 I enjoyed the Exhibition and seeing such a famous contemporary post-modern photographer’s images close up.  I admire her skills in transforming herself and creating strong narrative in her images but find the more extreme elements in her work unnecessary.  For me, Sherman’s work seeks to expose the superficiality of our everyday lives and our inability to penetrate beyond appearances in a media-saturated world.  In this sense, Sherman is holding up a mirror to our lives where not everything is what it might seem.  Moorhouse sums up as follows:

“The illusory nature of her images reflects the inscrutable face of existence.” (Moorhouse, 2019:420).

“For nigh on 50 years, on the strength of one enduringly brilliant idea – turning the camera on her transformed self in order to exaggerate and illuminate the archetypes that are all around us, so familiar as to go almost unnoticed – Sherman has been hiding in plain sight as one of the great artists of our time.” (O’Hagan, 2019).

However, for me the most significant point was partially made by Sean O’Hagan in his review of the Exhibition.  He pointed out some photograph albums displayed in the Exhibition showing early photographs of Sherman ringed in green pen with “That’s me,” underneath.  The artist was clearly borne out of self obsession and a need to be noticed and unnoticed at the same time! 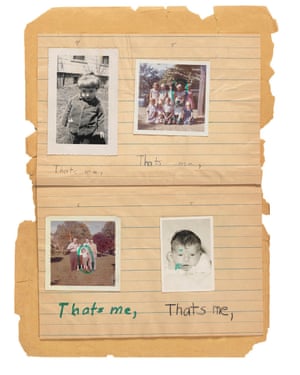 My name is Alison Price and for the past ten years I have travelled the world photographing wildlife, including Alaska, Antarctica, Borneo, Botswana, the Canadian Arctic, Kenya, Rwanda, South Africa, Zambia and Zimbabwe.
← Nature as Picture or Process? (Week 7) Preparing for my First Critique Session (Week 8) →