Nature as Picture or Process? (Week 7)

The book Landscape and Western Art by Malcolm Andrews was recommended to me at the end of Informing Contexts and I finally dipped into a chapter entitled Nature as Picture or Process?

As long ago as 1902 Cezanne remarked that:

“Today our sight is a little weary, burdened by the memory of a thousand images . . . We no longer see nature; we see pictures over and over again.” (Cezanne 1902) 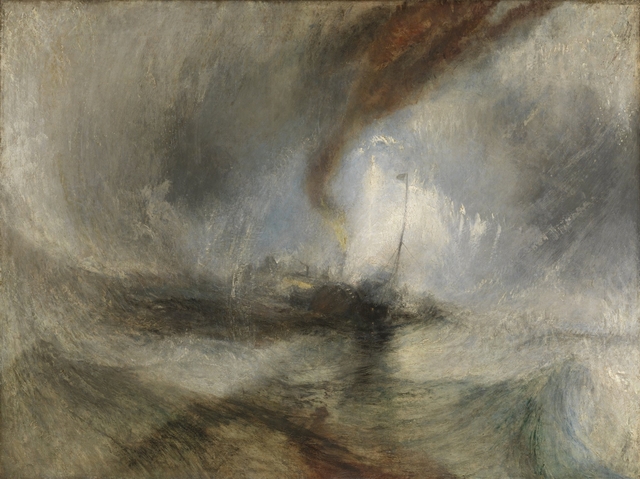 Andrews begins the chapter by recounting a story about J M W Turner’s Snow Storm painting above, where the artist sought to give a sense of what the sea is really like by apparently lashing himself to the mast to observe it firsthand.  In the face of the art critics who saw the painting as a mass of “soapsuds and whitewash”, and abandoning all sense of realistic representation, Turner responded angrily by arguing that his painting was an attempt to record nature.  His emphasis being on authenticity and experiencing a natural process of a storm at sea, even at the risk of unintelligibility:

The Athenaeum’s review of 1842 recorded a sense of utter disorientation unable to locate the steamboat or the harbour.  Turner had placed himself within the storm rather than observing from afar, thus experiencing the natural process firsthand.  There is also a subtle shift in the subject of Turner’s painting – it is not actually the steam boat but the violence and energy of the snow storm.  This was a new development in terms of the relationship between artist and the natural world.  Turner was taking en plein air (popular in Europe at the time) to a whole new level!  As Andrews explains:

“The idea of nature as a congregation of forces of growth and decay, a site of constant energetic movement and change, undermines the conception of landscape as a fixed, stable arrangement of natural form ordered by the artist at a distance.” (Andrews 1999:179).

This idea of nature being experienced by the artist and presented as something that is constantly changing rather than being depicted almost as a still life was a challenge.  How could this experience be presented in such as way as to not only silence the critics and be considered landscape art?  Cezanne explained the challenge as follows:

“All that we see dissipates, moves on.  Nature is always the same, but nothing of her remains, nothing of what appears before us.  Our art must provide some fleeting sense of her permanence, with the essence, the appearance of her changeability.”

This is exactly what I want to deliver in my photographic images.  A sense of being in nature and taking the viewer on a journey with me.  Interesting that Cezanne chose to use the word essence as have I, in articulating my intent in my Final Major Project work.

The paradox of the natural world being ephemeral (another word I have used in my search for finding the essence of Skye) and unchanging requires the artist to transfer to the viewer both a sense of energy and stability and at the same time give a sense of a relationship between man and their natural environment.  John Ruskin supported Turner in resisting the landscape tradition of generalising and idealising landscape forms in favour of painters paying greater attention to the details and specifics of the natural world.

Landscape with the Marriage of Isaac and Rebekah – Claude Lorrain, 1648

Ruskin saw the only credible landscape painter as one that was prepared to experience being in the landscape (both intellectually and emotionally) and also having an understanding of that landscape. 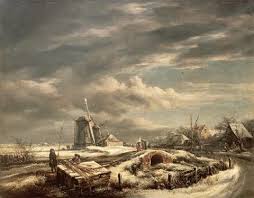 Indeed in Constable’s image Winter we see not only a landscape of the season but an ever-changing dynamic weather picture and how humans respond to those changes.

Goethe summed up this new approach as follows:

“A landscape painter should possess various sorts of knowledge.  It is not enough for him to understand perspective, architecture, and the anatomy of men and animals; he must also have some insight into botany and mineralogy, that he may know how to express properly the characteristics of trees, plants, and the character of the different sorts of mountains.” (Goethe 1831).

One of Turner’s earlier paintings Morning amongst the Coniston Fells (1798) is also a good example of reflecting nature’s ongoing passage through time featuring the changing light from night to day: 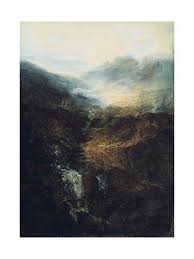 The accompanying words to this painting when it was first exhibited came from Milton’s Paradise Lost enhancing the meaning of the painting and adding to the sense of a dynamic and ever-changing landscape:

From hill or streaming lake, dusky or grey,

Till the sun paints your fleecy skirts with gold,

In honour to the world’s great author, rise!”

Working more outside and within the landscape led to a better understanding and responsiveness to the volatility of nature.  Jean-Baptise Camill Corot made the point that:

“We must never forget to envelope reality in the atmosphere it had when it burst upon our view.  Whatever the site, whatever the object, the artist should submit his first impression.”

“If we could only see with the eyes of a new born child!  Painting from nature is not copying the object, it is realising one’s sensations.”

Experiencing nature as a process rather than a picture requires a fundamental shift from landscape to environment.  The geographer Denis Cosgrove explained this shift in terms of a change from the painter being a detached outsider to one engaging in a complex relationship with the landscape.

Monet spoke of his need to experience nature and ‘instantaneity’ in the painting of his series Grainstack 1890-91, working in his home environment.  The series records the changes of the scene at different times of day and through the seasons.  He focused on getting to know the landscape intimately.

“the effort to engage more intimately with nature, to understand her workings, and to respond to the sensations generated by feeling landscape as a living environment, can take physico-aesthetic form, a mix of close scientific observation and or organic processes.”  (Andrews 1999:195).

The poet Gerard Manley Hopkins coined the phrases inscape and instress to express patterns in the landscape such as breaking waves and the setting sun.  The term inscape for me encapsulates the move from landscape to an intimate relationship with the natural world while instress explains the discovery of new beauties through long and continuous observation.

I have enjoyed finding out more about some of the painters and indeed writers that took up the challenge of moving from a detached and isolated depiction of the landscape to those with a deep understanding of nature and the environment, and nature as a process rather than a picture.  It has legitimised my search for the essence of my world rather than a depiction of it.  Turner’s Snow Storm painting has been a revelation in the sense that he was trying to achieve in his painting what I am striving for in my photography.

My name is Alison Price and for the past ten years I have travelled the world photographing wildlife, including Alaska, Antarctica, Borneo, Botswana, the Canadian Arctic, Kenya, Rwanda, South Africa, Zambia and Zimbabwe.
← Inspiring Guest Lecture and the Newspaper Club (Week 7) Revisiting Cindy Sherman at the National Portrait Gallery (Week 7) →