The term “landscape” dates back to the Dutch painters of the seventeenth century and was adopted in a significant way by eighteenth century English painters. In England, the agricultural and particularly the industrial revolution provided a context that influenced the development of landscape artists to include the sense of technological achievement of the time.

Landscape photography uses many of the compositional elements of landscape art, not least in adopting the traditional “landscape” format, but also in using the rule of thirds, the golden triangle and rules of perspective.

In photography there were two main approaches: one taking the approach of Carleton Watkins and Timothy O’Sullivan who were employed to chart land in the US such as for the Pacific Railroad and took a topological approach in recording the landscape, and then others such as Henry Peach Robinson who followed a poetic and picturesque approach. By the nineteenth century landscape artists were providing a romantic antidote to the ravages of industrialisation by producing therapeutic scenes of an earlier rural idyll, often introducing models to provide a sense of calm in the countryside.

The work of Carleton Watkins followed “a soaring sublime based on wilderness. . . The viewer of his photographs is often flung out over and above dizzying, deep chasms (Marian Warner 1997). 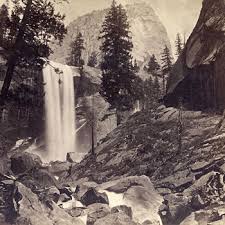 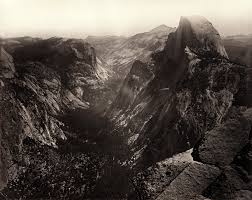 Similar images were captured at Niagara Falls and Yosemite.

Modern landscape photography continues to be associated with photographers such as Ansel Adams (one of my early inspirations in my landscape work). It is often influenced by aesthetic priorities and with an emphasis on the spiritual aspects of the landscape by using abstract imagery. Landscape imagery also reflects how its focus has changed over time with the introduction of various man-made inventions such as the railways, factories, energy generators and an increasingly industrial landscape but it has also changed depending upon the cultural influences and priorities of the time. For example, Ray Moore producing images of our industrial legacy. Fay Godwin’s work (mentioned previously in this blog in Weeks 1 and 2 of Surfaces and Strategies) often reflected the current debate around land access and property rights. Her images regularly contrasted the rural idyll with man-made items such as fences, gates and barbed wire to emphasise her message.

More recently, landscape imagery has often taken on the concerns around environmental and climate change and of course, images taken at a particular time, will naturally reflect the values and actions of progressive generations. Deborah Bright (Bright 1989) for example referred to the commoditisation of landscapes as tourist destinations and the consequent pictorial composition and imagery was produced as an antidote to this.

Today, photographers continue to pursue both a topographic approach and a contemporary sublime aesthetic in their landscape work. They are often drawn to remote and inhospitable parts of the world. For example, my blog last week discussed the work of Olaf Otto Becker who has been influenced by this approach.

So, how does this short history of landscape photography relate to my current photographic practice? Liz Wells suggests “that landscape is not just somehow ‘there’ waiting to be observed. Rather, photographers travel to places intending to explore particular histories and issues, hoping that their work can reveal something that might otherwise be overlooked, or that they can contribute to understanding our environment and our impact on it. . . Landscape photographers are not simply observers of the world around us; rather they interrogate it, drawing upon their experience as photographers to enhance the manner of seeing.”

“. . . geography (the actual topography of place), autobiography (the photographer with particular interest, experience, ways of seeing and methods of working) and metaphor (the aesthetics of the image, and also cultural resonances.”) (Adams 1996)

Although not everyone would agree with these statements, they do help me to think about my current photographic practice. In many ways I do not see myself as a landscape photographer although I am using a landscape I love as a means to unpack and close the horrors of my early photography experience and present The Road to Elgol through my eyes and in that context.

There is clearly an element of the autobiographical in my Research Project and I am also bringing my own ways of seeing and a reflective methodology to this work through the use of a journal and word clouds. As I mentioned last week in this blog, I do relate very much to the sublime aesthetic on a general basis and much of my early work on the course was in this mode. My landscape photography has been influenced by Ansel Adam’s work and I relate very much to the topological approach of Timothy O’Sullivan and his use of human traces to emphasise the scale of the landscape he was working with. I do not bring a particular environment or climate change agenda stance to my work.

One thing I have mentioned a number of times is that I am a very intuitive photographer and one that rarely has to think about my photography skills or the decisions I need to make. I was interested in a quotation in my reading this week from Roger Taylor, a photography historian:

“An experienced photographer knows intuitively where to place the camera and which lens to use for the best effect, much in the same way as a pianist arrives at the proper pitch and touch through daily rehearsal. It is all a matter of fluency and assurance.”

Bright, D (1989) Of Mother Nature and Marlboro Men:  An Inquiry into the Cultural Meanings of Landscape Photography in Boston, R (ed), The Context of Meanings, MIT Press, Cambridge

My name is Alison Price and for the past ten years I have travelled the world photographing wildlife, including Alaska, Antarctica, Borneo, Botswana, the Canadian Arctic, Kenya, Rwanda, South Africa, Zambia and Zimbabwe.
← The Colour of Time (Week 9) More Research on the Sublime as a Concept and an Aesthetic (Week 10) →