Foucault and the Word Cloud (Week 5)

The text for this week’s reading (Sturken, M. and Cartwright, L., 2001) on Modernity. Spectatorship, Knowledge and Power is centred around the writings of Michel Foucault, a French philosopher in the ‘post-structuralist’ tradition.

The reading captures a number of themes that Foucault addressed: modernity, reason, truth and most importantly power. For Foucault all relationships are about power and the conventional tools of the enlightenment – reason, knowledge, technology, and science were about the use and abuse of power.  Knowledge, Plato defined as ‘justified true belief’ and this, for Foucault, means truth and truth claims are just another exercise in the use of power: ‘knowledge is power, power is knowledge’ could just as easily be written as truth is power, power is truth. The problem with this, as Habermas noted (see Kelly, 1994), is that all Foucault has done is to embed the subject into the predicate. Whichever way one looks at it, knowledge (or truth) has been collapsed by Foucault into his implicit definition of power and the analysis that flows from it is based upon a self-imposed tautology.

The verb ‘to gaze’ has long had significance in art (Olin, 1996). To gaze represents a prolonged attention to the object, we do not peek or stare at a work of art, we gaze at it. Likewise, the work of art ‘gazes’ back at us (Elkins, 1996). The gaze is important because, as the psychoanalyst Jaques Lacan asserted: the formation of the child’s ego is differentiated when they first gaze into a mirror (Lacan, 1978), and this is extended to the spectator, who acquires their identity through the camera in the film. Furthermore, the male gaze in the darkness of the cinema is a way in which men increase their domination over women. They can, in the darkness, shamelessly objectify the female figure as their ego-ideal putting women onto a pedestal where their self is identified as object.

Foucault took this idea of the gaze and embedded it into his ontology of power. The gaze, for Foucault, was the means by which in the modern epoch control through punishment gave way to control through self-discipline (Foucault, 1977). The all-seeing eye of the street camera exerts its power through control by perpetuating the gaze even when the ‘big-brother’ of 1984 is not present. In medicine, the ‘expert-gaze’ defines what is normal and what is abnormal, and the coercive power of knowledge has become the coercive power to control. There have been many objections to Foucault’s conflation of power and knowledge.   The most telling comes from the notion of agency in that individuals react through subversion resisting the coercive control of institutions. From the hooded youngster hiding from the gaze of the street cameras to the demonstrators using their own knowledge shared through social-media to break free from the networks of institutional control.

To summarise a chapter of this length and difficulty is a challenge as it does not contain, within its discourse the conventional tools of argumentation or logical structure – which is entirely in accord with Foucault’s position. One way of dealing with this is to fracture the text, grinding down the statements to look at the conceptual units of meaning – the individual words. To do this I have put the chapter text through a textual analysis editor (nVivo) and created a word cloud which draws our attention to those words which dominate our reading and shape the meaning we place upon the text. 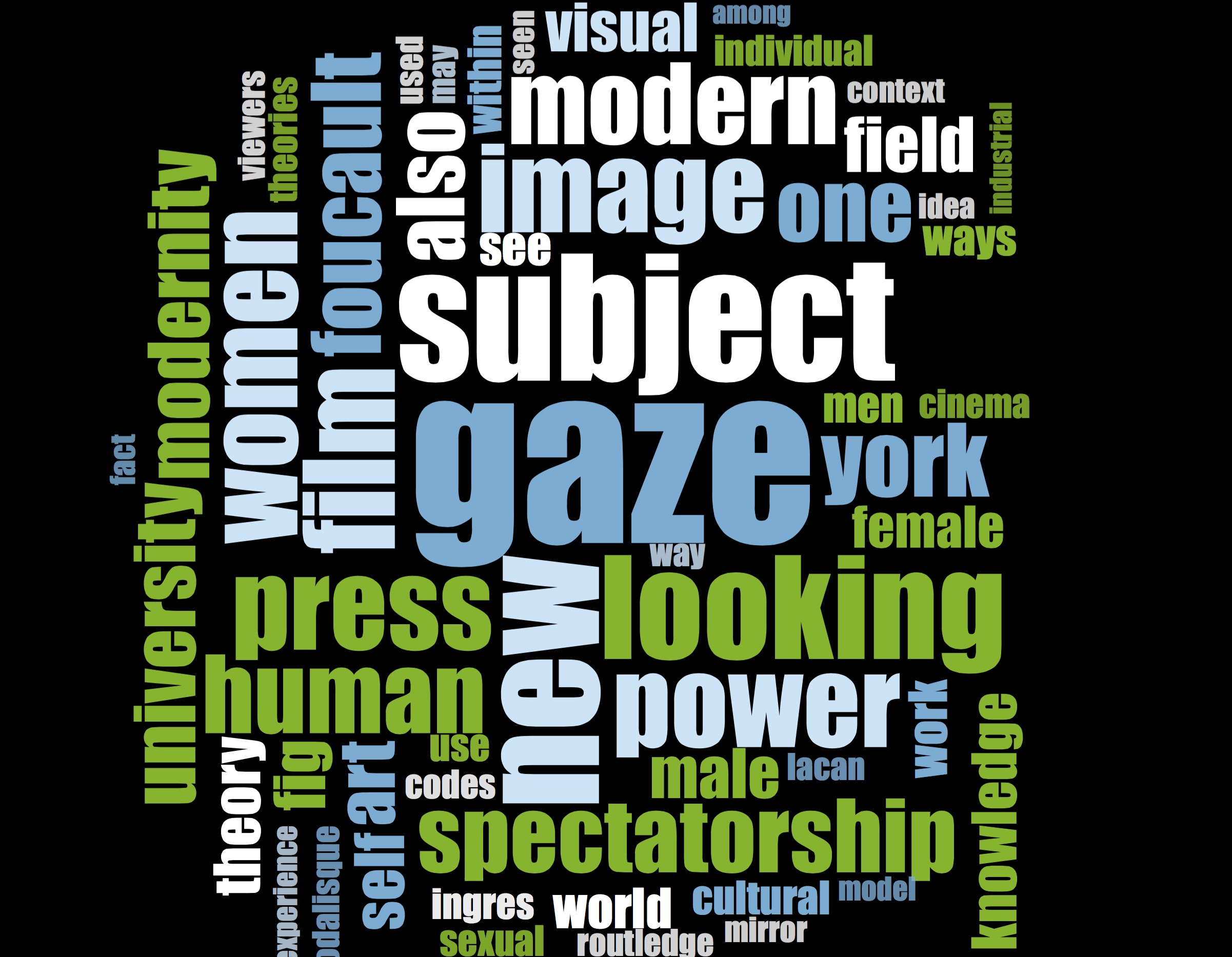 As we look at the cloud our gaze is drawn to the gaze as the words we have read stare back, as though reflected in a semiotic mirror (Elkins, 1997).   The focus on the subject is there too reflecting the transcendental self deeply imbued in Foucault’s own philosophical tradition.   We also note the importance in the text of the human, the film and the image but central to it all is the gaze, representing the human desire to know.

Elkins, James 1996 The Object Stares Back: On the Nature of Seeing, Simon & Schuster, New York

Foucault, Michel  1973 “Seeing and Knowing” In The Birth of the Clinic: An Archaeology of Medical Perception, Pantheon Books, New York

My name is Alison Price and for the past ten years I have travelled the world photographing wildlife, including Alaska, Antarctica, Borneo, Botswana, the Canadian Arctic, Kenya, Rwanda, South Africa, Zambia and Zimbabwe.
← The Moral Triangle, UKIP and Manifestos (Week 5) The Best Laid Plans . . . (Week 5) →