The starting point for this latest Thought Piece is a quote from the French philosopher Jacques Derrida.  Perhaps most famous for deconstruction, Derrida ignored the meaning of words as given and tried to probe behind them and between lines of text.  In so doing, in Of Grammatology (1998), he explained his search as seeking:

“the crevice through which the yet unnameable glimmer beyond the closure can be glimpsed.”

This constant search for an opening through which a revelation might appear is the driver for my photographic practice.  And as I spend time at Loch Cill Chriosd the names of Heidegger and Derrida, in different ways, loom large in my mind.  In Heidegger’s terms I am seeking that moment, that sense of being aware of another being, when the veil of presence is withdrawn, and the real object is revealed.  Derrida, on the other hand, does not speak of a veil of presence but rather a veil of signification of meaning.  Through his process of deconstruction, a signifier, he argues, is only able to defer to another signifier, rather than provide meaning.  Ryan & Price (Ryan and Price 2020) arguesthat what Derrida is describing in the quotation above, is a search for meaning or the essence of being, that lies behind the signifier and signification.

In my journal and on this blog, I wrote about my search for the unnameable glimmer in my photographic practice and my experience of being as being as follows:

“On many of the days [of my photographic practice] I was met with quite extreme weather including a number of gales and heavy rain and wind.  And it was on one of those days that I observed being as being.  I was out photographing a lone silver birch tree in a northerly gale on the crest of a small hill.  I realised that I needed to focus on keeping my footing and my connection with the land underneath me.  In that moment, I realised that was what the lone silver birch tree had to do every time it encountered this type of weather.  It was engaged with an ongoing battle against the elements.  I had always felt a connection with the silver birch, being quite small, vulnerable and fragile and yet, resilient and strong but on that day, it was at a different level.  I was aware of its being.” 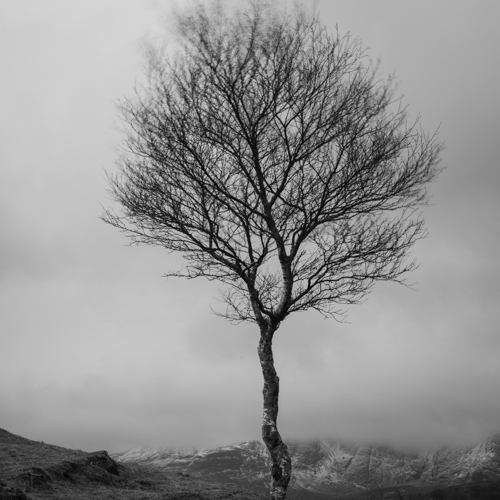 Reflecting on the Interpretation of Glimpses

While out in the field, I reflect a lot on the words from Jacques Derrida above.  How might I locate the crevice and glimpse the unnameable glimmer?  Will I know when I have seen it?  So, I started looking for signifiers of the glimpse.  I peered through the reeds to glimmers of light, or ripples on the water, I looked for a flash of light on the water’s surface (perhaps the reflection of a waterfall, for example) or under the surface of the water.  At the end of Week 2 and into Week 3 I started to peer through the trees to the loch, glimpsing the waters beyond and also through a blurred background to a sharp glimpse of the silver birches.  But these are overt manifestations of what I believe might be a crevice through which I might see the “unnameable glimmer”.  And, this conscious act of seeking out the crevice, does not chime with the spirit or intention of Derrida’s words.

As I spend more and more time, out in the field on dark, rainy days, in howling gales when it is difficult to keep my feet firmly on the ground and soaked to the point where the water is running down the inside of my trousers, I notice that it is then that my photography is at its most intuitive and my mind ceases to be overwhelmed by the sensory qualities of this beautiful Island.  At these times, I become entranced by nature, intuitively working with my camera and non-consciously immersed in seeking out the crevice that might reveal the essence of Skye.  As I emerge from this moment, I know that I have captured something special and I have engaged in a deep connection through being aware of being.  As Nan Shepherd wrote in The Living Mountain (2011):

“So, simply to look on anything, such as a mountain, with the love that penetrates to its essence, is to widen the domain of being in the vastness of non-being.  Man has no other reason for existence.”

What have I learned from this intensive period of photographic practice?  Accessing the crevice by which I might glimpse the unnameable glimmer is about a rigorous and systematic research method and approach, commitment and non-conscious engagement. It also requires a large dose of luck.  Looking back on the previous random approach to my practice, whilst yielding some success, it was not a strategy of systematic experimentation nor one that might provide an increased chance of success in my image making.   Even though I had chosen not to produce images overwhelmed by sensory perception, I was not routinely working in the appropriate conditions, and had myself been drawn in by the spectacular beauty of this Hebridean Island.  Although consciously I was looking for the essence, sub-consciously I had succumbed to the sensory object rather than the real qualities of the real object.  In so doing, I was engaging in presence rather than being with little hope of glimpsing the unnameable glimmer.

Ryan, R. and A. B. J. Price (2020). Object Oriented Photography – a Speculative Essay on the Photography of Essence.

My name is Alison Price and for the past ten years I have travelled the world photographing wildlife, including Alaska, Antarctica, Borneo, Botswana, the Canadian Arctic, Kenya, Rwanda, South Africa, Zambia and Zimbabwe.
← Supervisor Meeting 7 (14 December 2020) Thought Piece 8 - More Musings on the Unnameable Glimmer →