My supervisors have raised whether my research is practice-led on a number of occasions.  They have suggested that when I talk about my work I give the impression that it is ontologically-led rather than practice-led.  I have reflected on this a great deal over the last few months and considered why they have this impression and indeed whether it is true.  I wonder whether the framing of the title of my PhD is the problem:

The Ontology of the Photographic Moment – An Exploration of the Implications of Speculative Realism for Photographic Practice.

While the practice comes first in the title with the reference to the photographic moment, the second clause implies that I will be using ontology as a basis for developing and extending my photographic practice.  But is my supervisors’ observation the result of my over-commitment to a title that was written nearly two years ago or does it signal a preference on my part for ontology over practice?  If I step back to the end of my MA, I recorded that having explored a phenomenological approach to my photography in the previous two years that the reality of Skye had got in the way and that actually what was driving my work was a wish to capture those fleeting moments when the essence of the Island is revealed.  I did not want to continue to capture sensory perception, like so many others, but wanted to get behind the veil of perception to the reality beyond.  This led me to Speculative Realism and Graham Harman’s Object-Oriented Ontology in particular.

I spent many months before my PhD began reading as much philosophy as I could manage.  Having never studied philosophy before, I was concerned about my ability to catch up sufficiently to inform my photographic practice accordingly.  But philosophy reading and research is hard going and I had to invest a great deal of time learning the basics.  Having started to feel more comfortable, at least with those terms and philosophers most important to my research, I felt the need to write down the ontological basis for my photography and how that in turn informs my practice – this writing formed the basis for my Upgrade Document.  With the upgrade process having gone well I began to feel more confident in my ability to grasp the philosophy and its relevance to my practice.

As my thoughts turned to the structure of my thesis, my supervisors repeated the view that the ontology was leading the practice, rather than the other way round.  In our discussions about the structure of my thesis I spoke about my concerns of moving too far away from a typical structure and part of my reasoning for writing an “Ontology Chapter” was that this work provided the basis for my photographic practice and without this understanding the reader might consider my practice as baseless.  To me, the “Ontology Chapter” seems like the literature review of a traditional thesis model.

However, having said all this, I can see why my supervisors have made the observation that my research is ontologically-led rather than practice-led.  Maybe my lack of confidence with the philosophy has given the impression that my practice is subordinate to my ontology which I do not believe to be the case.  In fact, I believe that my practice and research is truly iterative in nature – a continual process of making work, testing the results against the ontology and making further work using different approaches, methods and techniques.

In the A Question of Sampling post last week, I referred to my research as being recursive.  In fact, I think that the ongoing relationships between my research and practice is recursive. Furthermore, the continual iterations between practice, ontology, epistemology, methodology and methods give way to recursions at every stage.  See heuristic below: 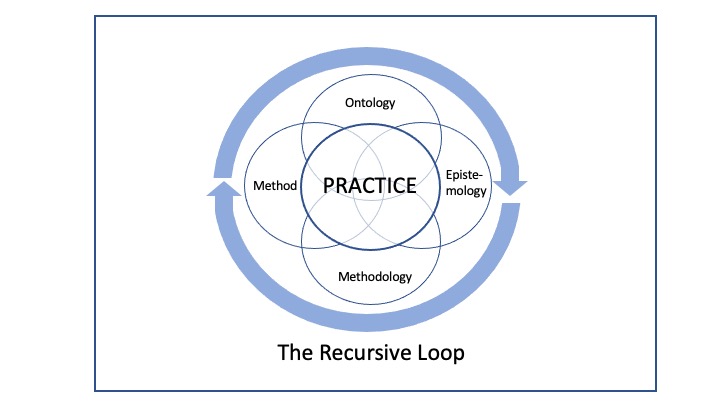 I often refer to definitions in Thought Pieces as a starting point, in order to clarify the scope of a blog.  Recursive, according to the Cambridge English Dictionary involves doing or saying the same thing several times in order to produce a particular result.  While the Collins Dictionary refers to the repetition as being indefinite.  However, a definition in Oxford Languages Google Dictionary (Google 2022) is more akin to my use of the term although it refers to recursion in mathematics and linguistics as:

“relating to or involving the repeated application of a rule, definition, or procedure to successive results.”

Returning to the dilemma of theory-led or practice led research, there is a view, that practice can drive theory – this is often referred to as a ‘grounded theory’ approach where general implications are induced from specific practice or observation.  However, as Norwood Russell Hanson originally observed: observation or, in my case, practice, is always ‘theory-laden’.  Is it possible to engage in photographic practice free of the contingencies and biases of my own life-world?  Since Helmholtz, we have realised that the act of seeing can never be passive but reflects the resolution of the searching of our predictive brain. So, practice is always embedded within the practitioner’s world view and how this is worked through in the research process.  The problem therefore becomes one of knowing how to penetrate and prioritise the five key elements of the research process I have outlined in my ‘visual heuristic above’.  Although my practice is the most fundamental part of my research, to what extent can it be said to ‘lead’ the outcomes? Or are the outcomes and any contribution of my research  a product of all five elements, in combination and entangled where my practice is enhanced by the direction dictated by my ontology?

As I move forward with my practice, I believe that the recursive nature of all aspects and stages of my work will become clear, and the emphasis on the ontology will recede as it becomes more embedded  rather than dominant in my practice.

My name is Alison Price and for the past ten years I have travelled the world photographing wildlife, including Alaska, Antarctica, Borneo, Botswana, the Canadian Arctic, Kenya, Rwanda, South Africa, Zambia and Zimbabwe.
← Supervision Meeting 22 (15 February 2022) Notes and Images from a Small Island (Practice Period 9 Day 1) →