I wrote last week in my Into the Woods post https://www.wildreflections.photography/uncategorised/into-the-woods an introduction to my current photographic practice – trees, and the fascination of artists with our long-lived co-habitants of the world.

In The Times this morning, Mike Wade wrote:

“For naturalists the woodlands of the western Highlands seem a kind of paradise.  The oak, hazel and rowan trees support teeming wildlife and offer the chance to glimpse rarely seen birds such as pied flycatchers and redstarts, and elusive animals such as pine martens and beavers.

It is the kind of abundance one may expect in a temperate rainforest, to give these woodlands their scientific name.  They are rich but delicate ecosystems that have survived for aeons in only a very few places in the world.”  Wade (2021)

After spending a few days exploring and wandering through local forests, I want to share some more thoughts about the essence of trees.  I also want to say more about the experimental work in my practice – using reductive strategies to strip back the image to the essence, rather than produce a literal representation.

In this piece I would like to go beyond the physical – beyond the analysis of parts – to consider the various aspects of trees and then move on to the social life of trees and their relationship with other occupants of the forest.

In general, trees have a longevity beyond a human life span.  They exist before and after we join and leave the world.  Although there are lots of sensory aspects to trees such as their shape, the texture of the bark, the warmth of the trunk, the movement of the canopy and the noises they make in turbulent weather, they also take on metaphorical meaning, and this for me is an important part of my connection and photographic strategy – to try to access the being of a tree or a forest.  Trees can signify strength and resilience but also vulnerability and malleability.  The slender stem of a silver birch can signify the female form whereas an oak might suggest a stronger male outline.  Trees can be considered on their own as lone beings in the landscape or collectively as woods or forests where they take on different more social functions.

Trees are social, and forests and woods are rich and complex habitats.  Trees create relationships with other trees – they can grow close together and block out the light of some of their weaker neighbours.  They propagate through the seed of their fruits and ‘families’ of trees, for example, oaks, emerge over time – creating a woodland community.  Trees have symbiotic relationships with flowers, moss, fungus, ferns, lichen, birds and deer, to name but a few – they provide food, shelter and cover and a micro-climate of warmth.  The forest or woodland floor is an uneven entanglement of roots, spongey grasses, fallen trees, liverwort and decomposing leaves.  Forests attract water in the form of rain, generate oxygen through photosynthesis and create a rich, wet atmosphere.  My time in the local woods and forests has led me to reflect on the essence of trees, both as individuals and collectives, and how this might change or influence my image-making.  For the next week of practice, I intend to focus on these communities of trees and their collective impact and representation.

My supervisors suggested that my early attempts at depicting woods and forests had resembled digital paintings – this I took to mean that they were in some way over-processed and contrived. 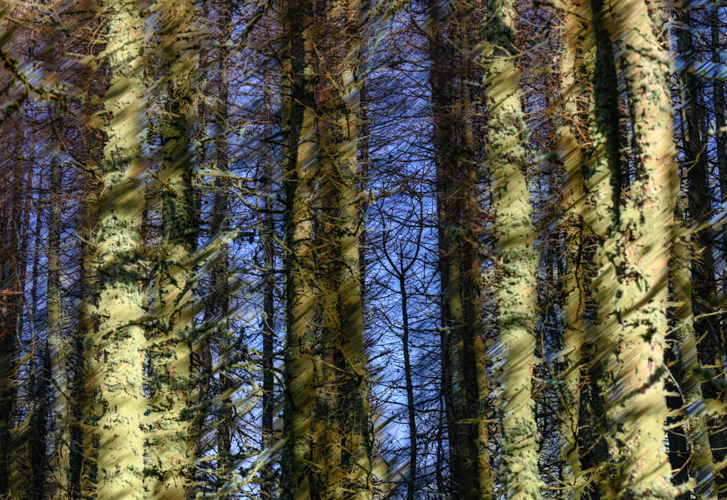 My response to this claim is first that the processing was very limited, and second that the images were the result of much reflection about the points I have made above. In seeking to depict being among trees I deployed an intentional strategy of reduction in my photographic work – that is, I reduced the representation of the wood by blurring the tree forms and the collectives’ shapes and patterns of the forest.  In these images, I endeavoured to mimic the shape and movement of the stand of trees while also in some, providing a glimpse of what lies beyond, at the other side of the forest.  I looked out from the tree cover and also looked into the wood.  In some of the images I developed these ideas further as I began to feel a sense of the mythology, spirituality, the mystical and magical qualities that light and shade can create in these co-habiting spaces.

The complex systems involved in forest and woods have emergent properties.  It is possible to catch glimpses within and among the trees.  As you focus on a single tree, the surrounding woodland withdraws, and as that focus on the singular is interrupted the wider forest emerges.  In my image making, by blurring the profile of single trees I reduce attention on the singular to reveal more and more of the forest and in so doing glimpse the emergent properties that make the forest what it is.  Through these painterly images, I am seeking to disrupt our attention on individual components in order to increase our awareness of the collective of trees.

My intention is to work among the trees, in the wood to avoid the sense of an observer looking in.  I want to become part of the wood and as a photographer become dependent and constrained by the wood.  My approach and goal are arguably similar to that of Marcus Coates.  For example, by being a bird, a Goshawk in a tree, or becoming a stout, he challenges our being in one reality and enters into a “dream space”.

My name is Alison Price and for the past ten years I have travelled the world photographing wildlife, including Alaska, Antarctica, Borneo, Botswana, the Canadian Arctic, Kenya, Rwanda, South Africa, Zambia and Zimbabwe.
← Critical Reflection of Practice (Week 1 January 2021) Notes and Images from a Small Island (Practice 2 Day 6) →