My Upgrade Meeting raised some interesting issues about the use of the word “essence” and related terms such as “hidden” and “beyond” in describing my photographic practice and the search for the ephemeral hiddenness of Skye.  And while the examiner recognised that I was using the term essence consistent with Graham Harman’s Object-Oriented Ontology, nonetheless he felt it carries unnecessary philosophical baggage and does not do justice to the photographic work I produce.

“designate the crevice through which the yet unnameable glimmer beyond the closure can be glimpsed.”  (Derrida 1967).

As I have thought about this issue I began to wonder if this is what I think of as a ‘boundary problem’ as we move from the ontology of being to the epistemology of knowing.

As part of the presentation for my upgrade to PhD, I articulated a journey from ontology to practice through Ontology – Epistemology – Methodology – Methods – Practice.  The boundaries between various stages of the journey from ontology to practice are permeable and it is easy to influence our reading of one, given our understanding of the other.  The precedence of ontology over epistemology relies on the idea that it is possible to think abstractly about objects in the world, without committing to knowledge of those objects.  An example of this is that Theologians debate endlessly the possibility of God without any necessary commitment to coming to know God through spiritual practice or religious belief.

So, ontology enables the possibility of epistemology, rather than vice versa.  Focusing on ontology, the Speculative Realists embrace belief in objects whose being is independent of our experience of them.  This ‘flat ontology’ which radically uncouples the object from the experience of the object, not only applies to the relationship to minds and objects but between objects themselves.  As objects can withdraw aspects of their being from us, then likewise an object only partially reveals its being to other objects.  Thus, in this sense, no object can come to an object in a complete way, either in terms of the object itself (Real Object in Harman’s terms) or in terms of the wide array of qualities (Real Qualities) that it can either actually or potentially present to either our or another object’s experience.  Indeed, some qualities can never be the subject of direct experience. We cannot experience ‘climate’ directly – we can only experience weather in all its forms – although few would argue that the climate is a real quality of the essence of Skye.

From an ontological perspective, Harman uses the term ‘essence’ to refer to the wide range, and possibly near infinite real qualities that any object can possess consequent upon the reality of its being.  So, even when we eat an apple, many of its real qualities are withdrawn during the encounter and indeed, aspects of its physical being remain intact after eating.  So, the use of the word ‘essence’ in my research and writing is an ontological statement about the universal set of real qualities an object possesses.

Turning to the epistemological issues that flow from the ontological position I have chosen, and following what I have said above, there is necessarily, in any conjunction between objects, both epistemic and experiential loss. 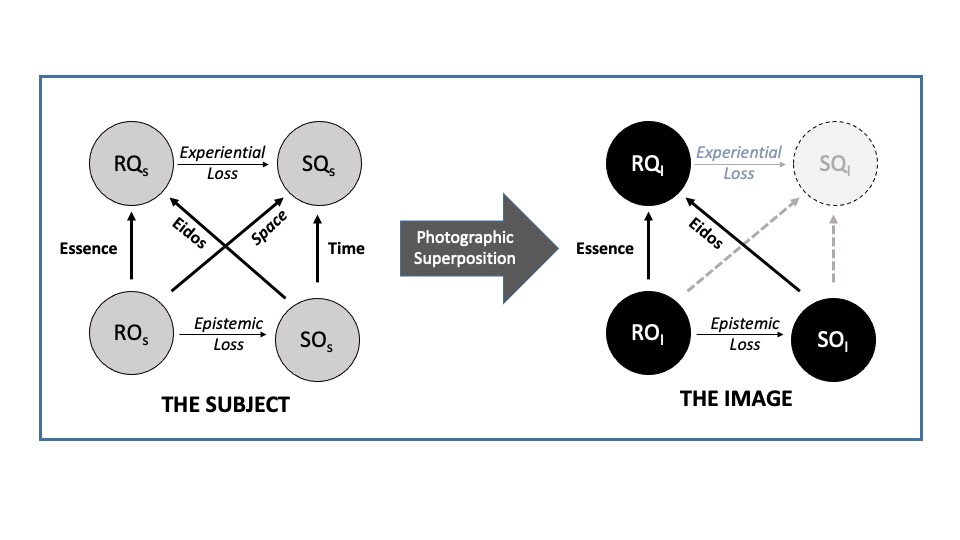 This means that in coming to know an object, our epistemological task is to open, or widen the field of real qualities, to a greater and deeper extent than can be achieved through any casual encounter.  I am therefore looking to extend the possibilities of encounter such that the set of possibilities open to us can approach, more closely, the essence of the object (which is the universal set of all possibilities) but which will always fall short of completion. My claim is that using the camera, with its ability to transcend space and time, can open up the range of possibilities accessible to us.  By that, the camera attenuates the sensory qualities of the photographic subject and switches our attention from direct experience to awareness of what is withdrawn (the “eidos”, another of Harman’s terms) or, to put it another way, it makes real what is denied to us by the onward rush of conscious experience.

For better or for worse, I have chosen to accept the ontological position of Graham Harman’s Object-Oriented Ontology and taken it as a given.  In making this choice, I have accepted the constraints of the physical, at the same time accepting that in doing so it also limits my ability to stray beyond the physical into the metaphysical.  As I have said before, I am taking a leap in the dark.

Ryan, R.J. and Price, A.B.J. (2021).  Object-Oriented Photography – a Speculative Essay on the Photography of Essence.  Unpublished.

My name is Alison Price and for the past ten years I have travelled the world photographing wildlife, including Alaska, Antarctica, Borneo, Botswana, the Canadian Arctic, Kenya, Rwanda, South Africa, Zambia and Zimbabwe.
← Supervisor Meeting 18 (20 October 2021) Notes and Images from a Small Island (Practice 7 Day 1) →