Snapshots from a Small Island

At the end of the first semester of my PhD studies I felt very reluctant to take a break. I was full of enthusiasm for the progress I had made, in terms of my academic thinking and the development of my photographic practice – and more importantly the integration of the two.  I was eager to continue reading and take more photographs.  But, we had been encouraged to take some time away.  It has been a very tough year for all of us and so I decided to take a break.

During the time before Christmas, I was itching to open up my blog and write but I resisted.  If it hadn’t been for some very bright sunny days on the Island, I might have taken a trip down to the loch.  Instead, I decided to do some reading that was only broadly relevant to my studies.  I started with Wildwood – A Journey through Trees by Roger Deakin, considered one of the finest nature writers of the twentieth century.  His book is a study of wood, not only in terms of how it exists in nature but also in our culture and our lives.  It is not only an autobiography but also a history, tales of travelling and of the natural history of trees.  For me, it reads a little like an encyclopaedia, and whilst as others have said, every page has a nugget of information, knowledge or experience, it became almost overwhelming.  There appeared to be too many words on the page.  However, it also served as a very helpful reference to other films, books and poems that might be relevant to my work including:

The Third Thing – a poem by D H Lawrence:

“Water is H2O, hydrogen two parts, oxygen one,
but there is also a third thing, that makes it water
and nobody knows what it is.
The atom locks up two energies
but it is a third thing present which makes it an atom.” (Lawrence 1928)

After Christmas, I could resist no more and so I journeyed down to the loch on a very wet and windy day.  I intended to do some multiple exposure work but with the driving rain it was not the best day to be fumbling with the settings on my camera.  I took a small number of shots before the lens got very wet.  I am calling these images snapshots as they are taken more for pleasure than necessarily as a serious contribution to my portfolio. 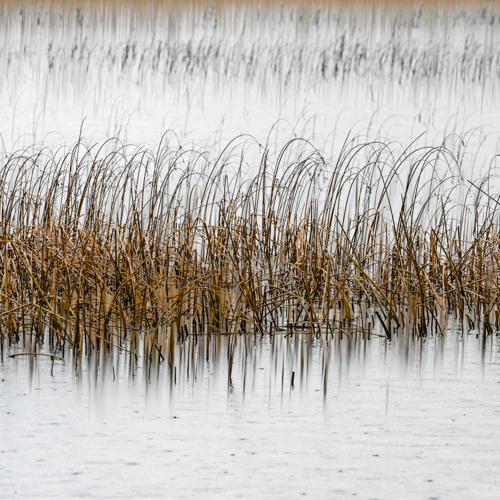 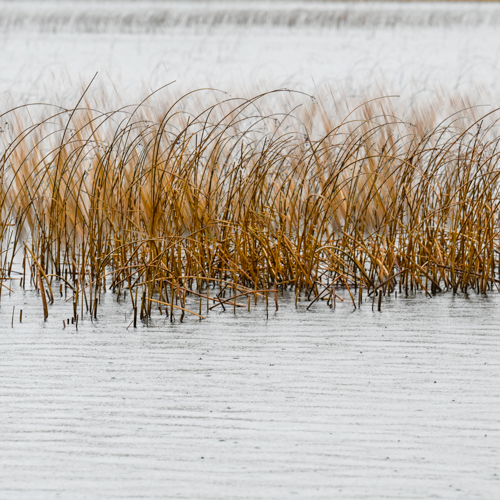 The following day brought heavy snow and I very carefully journeyed to the loch.  I was greeted by the usual welcoming committee who had just had their morning winter feed. 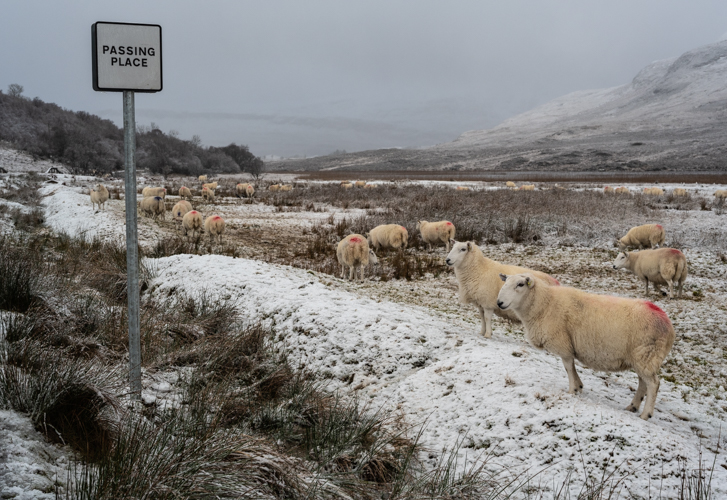 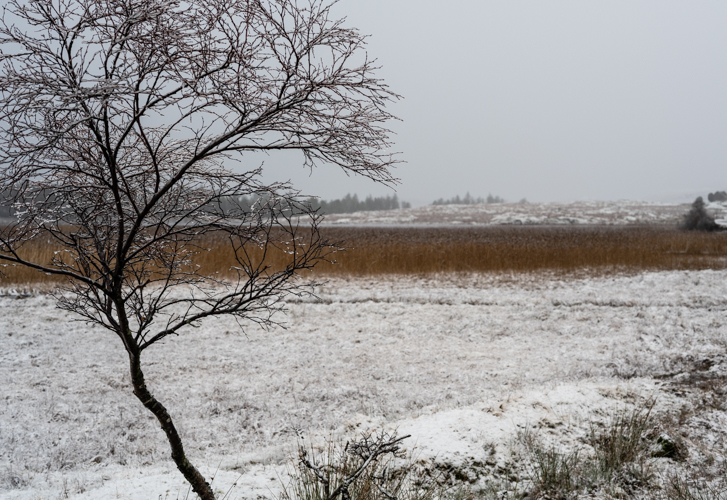 I took some shots of the loch with a light powdering of snow settled on the nodding heads of the reeds however, they did not come out as well as I expected – the light was flat and the snow flakes were not illuminated against the golden reeds.  I converted this image to black and white to see if this would give more contrast but sadly not.  Having said this, it has given me some ideas for shots when we get a heavier fall of snow.  I also want to venture among the trees that border the loch to capture the lying snow on the grassy tussocks. 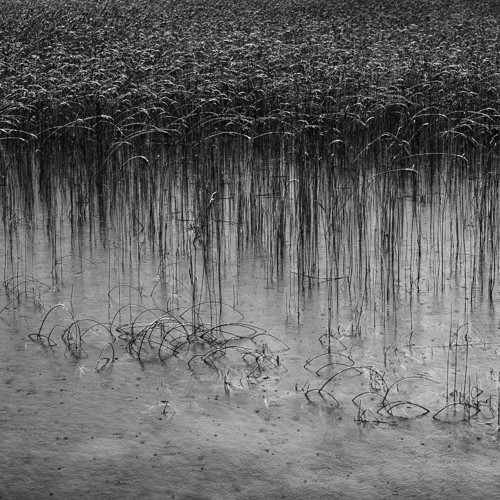 I went for a long walk on the first day of really good weather since Christmas Eve armed only with my iPhone.  There had been a hard frost and the paths and roads were very icy, and the puddles formed by the heavy rain had frozen solid.  I was interested by some of the beautiful patterns.  As I was taking the images, I was reminded of Derrida’s glimpse through the crevice and decided to return with my Nikon in the coming days. 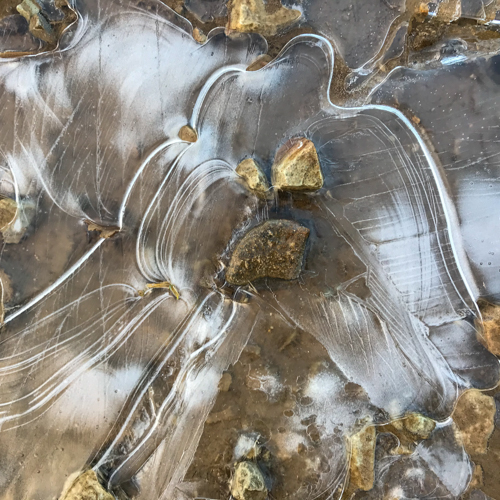 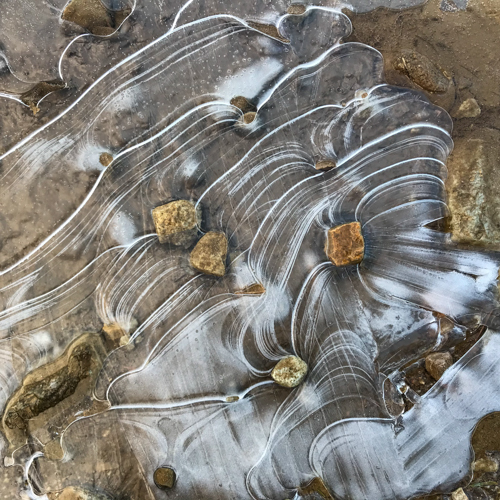 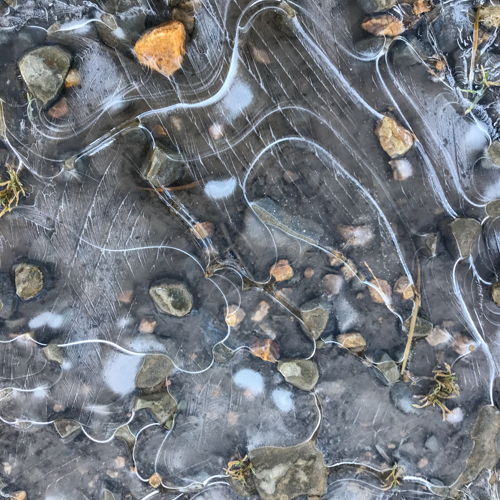 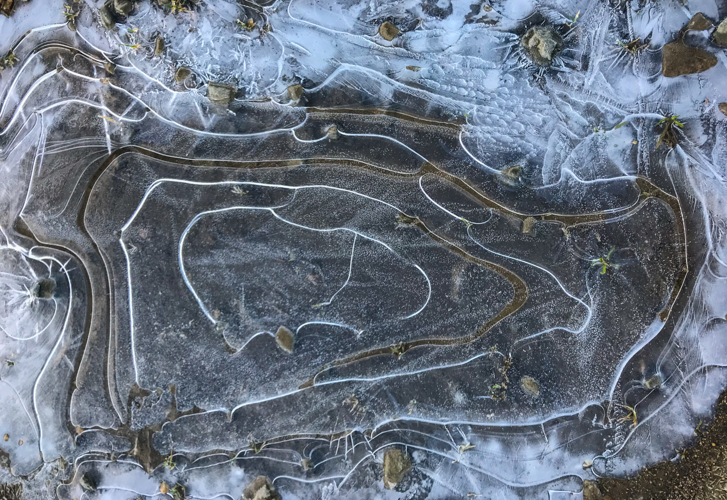 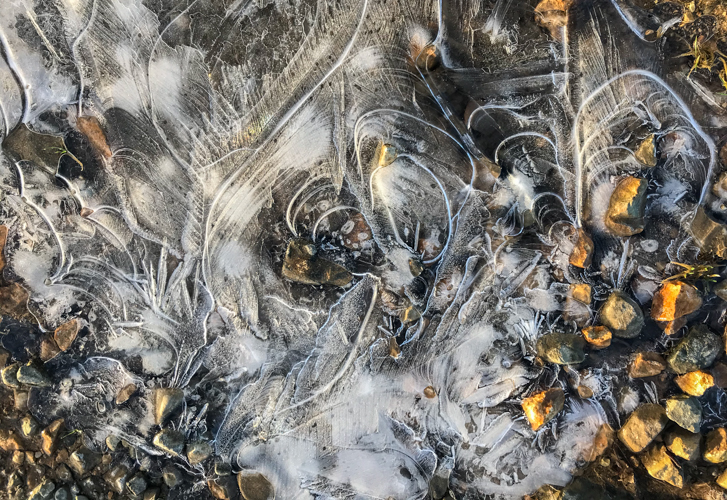 So lots of inspiration and avenues to follow up as I begin Semester 2.

My name is Alison Price and for the past ten years I have travelled the world photographing wildlife, including Alaska, Antarctica, Borneo, Botswana, the Canadian Arctic, Kenya, Rwanda, South Africa, Zambia and Zimbabwe.
← Reflections on Semester 1 of my PhD Studies The Wild Silence by Raynor Winn →