Moments of Insight in Year 1 of my PhD

In the early months of my PhD, my second supervisor suggested I read Practice as Research in the Arts by Robin Nelson (2013).  His words about practice-based and multi-modal research were formative in developing a reflective practice and a circle of being – reflection – action model allowing the integration of practice and academic research. 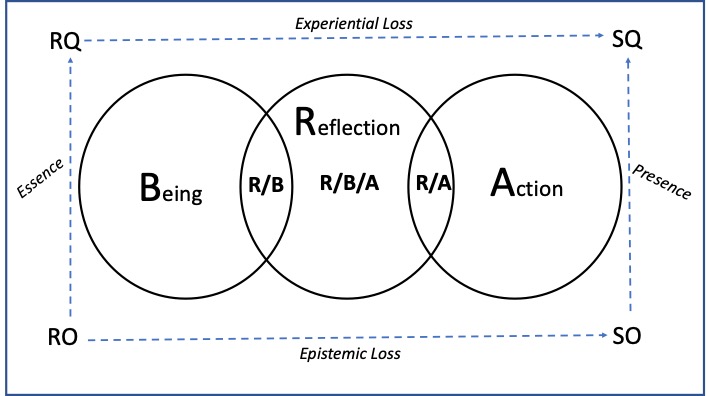 The intersection between the ontology and the epistemology of photographic practice

I also determined to record what he refers to as moments of insight where reading, reflecting or elements of practice lead to a change in thinking, approach or direction.  As I reflect on my first year, although I have two months left, I thought it would be appropriate to record some of my moments of insight in this post.  I have to say that having the resource of well over 100 blogs makes this task much easier, although I do also have a spreadsheet where I record key moments.

During the first period of lockdown, spent on the Isle of Skye, I used the time productively, reflecting on my MA Photography and looking forward by formulating the PhD proposal for submission to the University of Dundee.  There were moments of insight during this period, although I did not understand or record them as such – for example, turning my back on phenomenology in favour of Graham Harman’s Object-Oriented Ontology (2018).  My proposal started to take shape as I reflected on Derrida’s “unnameable glimmer” (1967) and Heidegger’s “being” (1953) and “unconcealment” (Wrathall 2011).  Whilst my research title and objectives have not changed from the proposal I submitted in April 2020, my ability to explain, inform and reflect on how these thinkers influence and inspire my work has matured significantly.

Before starting my PhD, another key influence was Patricia Townsend’s book Creative States of Mind – Psychoanalysis and the Artist’s Process (2019), based on her own PhD work undertaken at The Slade School of Fine Art in London.  She developed a series of stages in producing creative work from the pre-sense and preparation, research and gestation stages to the artist’s internal frame and out into the world as the work reaches its final stages.

I referred above to a supervision meeting with my second supervisor where she referenced Nelson’s book and approach, and this coincided with an early realisation that my ways of thinking and working were developing quickly.   In a presentation to fellow research students, I spoke of my journey from a rather linear focus to a sense of play in my practice, a change in focus from outputs to process, moving from a narrow to broader scope of academic research, from being somewhat rigid in my thinking to more open and reflective and from having a structured way of working to allowing a more organic development of my work and thinking – and in particular making time for reflection.  At the time, I found these changes somewhat scary but now I am more able to embrace a fluid and responsive way of conducting my research and practice.

Also, in the same early presentation of my work I referred to the following words from John Berger:

“At times failure is very necessary for the artist.  It reminds him that failure is not the ultimate disaster.  And this reminder liberates him from the mean fussing of perfectionism.”  (Berger (1972)).

At the time, I think, realistically that it was more an aspiration rather than something I had embraced, particularly in my photographic practice.  However, I was reminded of the sentiment this morning as the great Olympian and British rower Helen Glover referred to the importance of failure.  I need to learn that failure is the best way of learning and protecting yourself from failure is no way to live your life!

Another moment of insight was finally understanding Nan Shepherd’s The Living Mountain (1977).  Previously, I had been struck by Shepherd’s graphic descriptions of the natural world, referring to all the senses in her prose.  However, I had been too ready to assume that Shepherd was more about her experience of the world (phenomenology) rather than about being (ontology).  I had come to these conclusions too soon and after reading her slender book twice more it became clear that phenomenology had provided the path to ontology and the living mountain.

And finally, at a photographic society meeting, a member asked me whether I was aware of my focus on panels and the coherence of images in editing and presentation.  She suggested that, for example in books, the images I choose, need not necessarily have to blend nor be aesthetically similar but might form a narrative where different types of images were juxtaposed.  Or the book format might allow for punctuation, between chapters or collections of images through blank pages.  This reflection of another on my practice struck a chord and a recognition that she was right, and maybe this focus on panelling, largely encouraged through the RPS distinctions process, might restrict the editing and presentation of my work.  This is something I want to focus on, with the help of my supervisors, in Year 2.

These examples of moments of insight are by no means exhaustive but in this post, I have picked out a selection that demonstrate where I have changed approach, perhaps understood something differently in my research or where others have pointed out features of my work of which I was not aware.

My name is Alison Price and for the past ten years I have travelled the world photographing wildlife, including Alaska, Antarctica, Borneo, Botswana, the Canadian Arctic, Kenya, Rwanda, South Africa, Zambia and Zimbabwe.
← Back to the Reeds Focusing on Upgrade Document →