Having struggled to capture the new reality of the space that was a forest, as the second week of my practice progressed, I began to consider high key imagery as a technique that might reveal what has emerged since the felling of the trees.  From both an aesthetic and ontological point of view, it seems to me that the process of revealing and concealing aspects of the topology and landscape will help me capture the transience of physical reality in what remains of the forest.  Using the high key technique is about working on the boundary of presence and being and capturing the ephemeral moments in between.

While my first attempts were produced in post-processing to test the idea, I sought to acquire new skills to be able to produce the images in camera.  This, I have discovered, is crucial both for the success of the technique but also for capturing the nuances of detail, and the transitions from light to dark. High key is about managing exposure such that the resultant image is over-exposed by between two and three stops.  The exact degree of overexposure is determined by a degree of intuitive judgment about the moment that presence is on the verge of withdrawal.  In the post-processing phase, it is about balancing the settings to reveal being and conceal the sensory elements. It is not about correcting exposure or disguising faulty technique.  Working in high key I was exploiting to the limit, the power of reduction, a strategy featured in the Star Diagram. By converting my images to monochrome I remove the distraction of colour and by so doing isolate important aspects of the landscape.  At the same time, I played music in the field and during post-processing to encourage the activation of my non-conscious awareness. 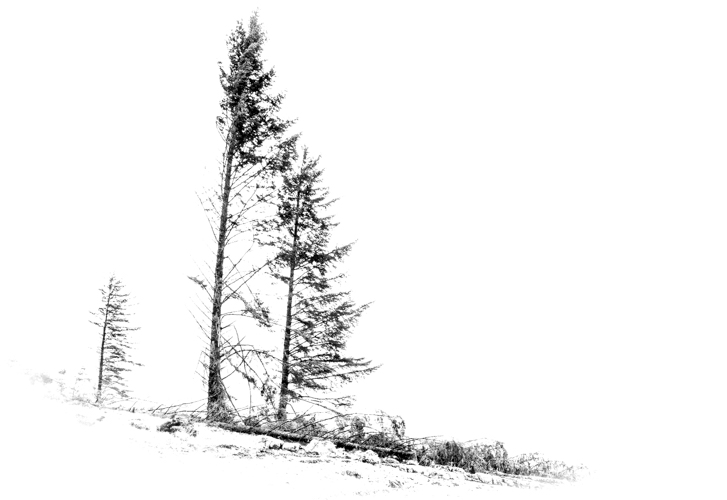 For me, the story is the precarious and vulnerable life of the trees left standing, the fine line between life and death and the impact the ever-changing climate might have on them.  As it turned out, I did not have to wait long to find out!

“I return to the ‘forest’ on Day 11 wondering whether the few standing trees have weathered the storm.  From a distance the answer is clear to see.  The headland is different, it has fewer trees.  I fear the worst and soon realise I am right to do so.  The reality is that the remaining trees were never going to survive in this hostile environment.  One by one they will be picked off by the next violent storm.  The trees have physical and social networks and the loss of their supportive neighbours changes their reality.”

All of the images below show the power of nature on nature.  The small tree left standing with its bigger neighbour snapped by the strength of the wind.  A line of trees exposed to the full force of the gale with no near neighbours to protect them.  And even larger trees have collapsed, top heavy from growth in a forest, but now cruelly exposed to the violence of the winds.  The gravel roads and paths are now impassable, blocked by fallen trees and the threat to life and limb of further falls. 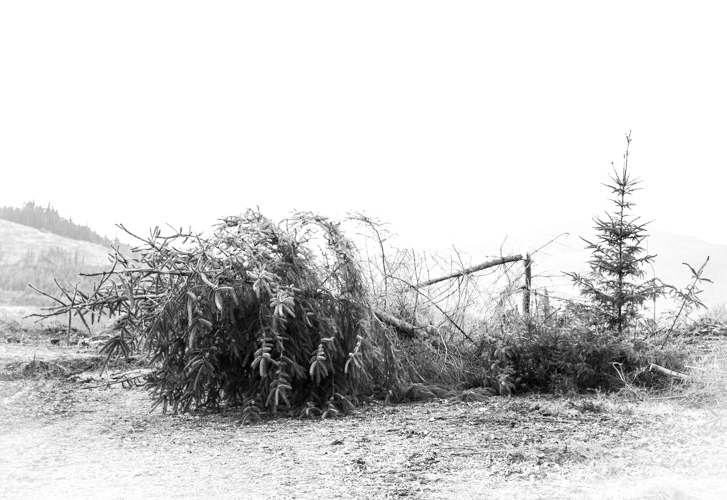 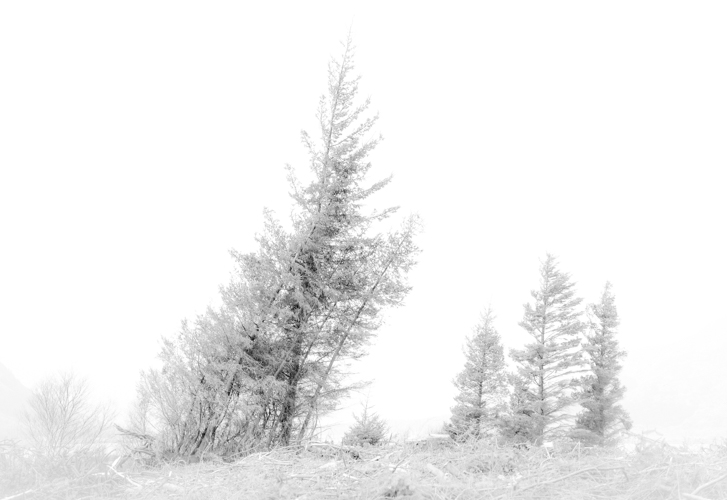 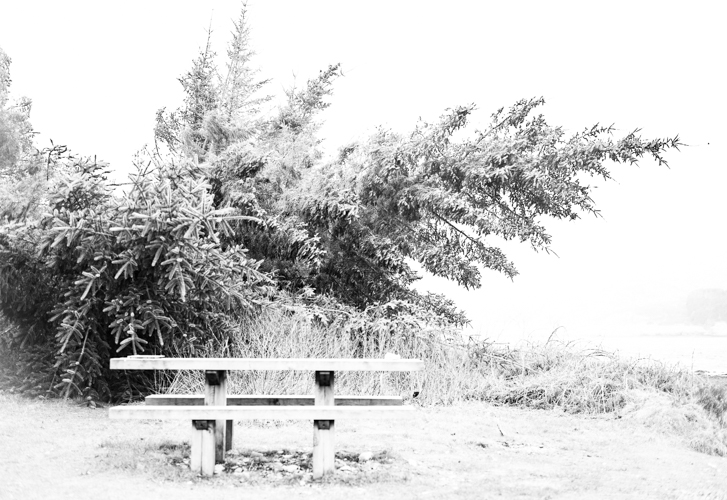 Perhaps my favourite images are the two below.  Both show the fine line, the boundary between life and death – the trees felled by wind making its way through the spruce forest, snapping the vulnerable in its path.  In the second the piles of logs portray the death of those already taken, while the forest in the background is a part of reality for the moment – a fading forest, perhaps next to face the destructive power of the chain-saws and logging machines. 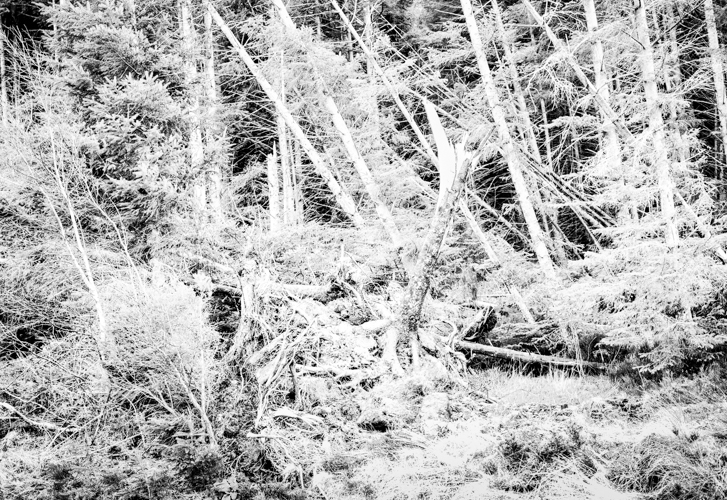 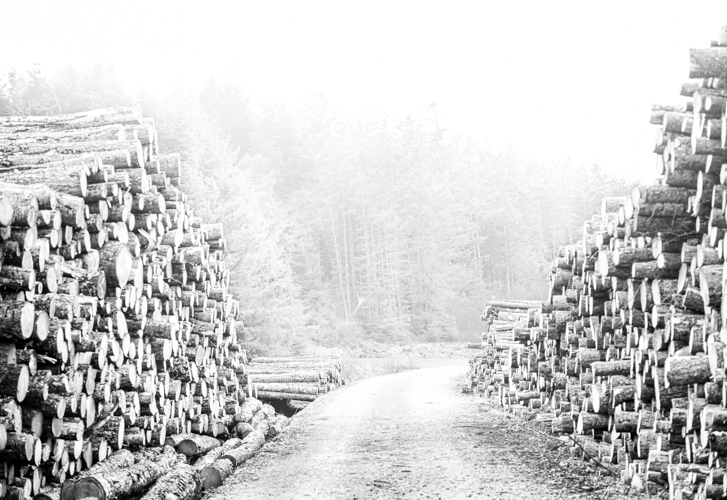 One of the lessons of the last couple of days has been to capture images when you see them.  Do not decide to return the following day or sometime in the future.  As I learned, reality is very transient and can change in a moment.  The storms of the last week have changed the landscape forever and a new reality pervades.  Indeed, the trees featured in Fracture 53 have all been taken in recent days.  Another lesson is that the pursuit of subject commitment and spatial persistence, returning time after time to the same subject and location has its strengths and weaknesses.   It is about making a connection, spotting changes in the reality (often not as dramatic as the recent events in the forest)  and becoming passionate about the subject of your art.  I have not only taken many images of the trees now lost but have documented their violent demise.  It has been an emotional journey, which I plan to continue, as I seek to capture the ever-changing reality of the landscape.

My name is Alison Price and for the past ten years I have travelled the world photographing wildlife, including Alaska, Antarctica, Borneo, Botswana, the Canadian Arctic, Kenya, Rwanda, South Africa, Zambia and Zimbabwe.
← Notes and Images from a Small Island (Practice 8 Day 10) Thought Piece 26 - A Question of Sampling →