Practice Period 11 has extended over a couple of months and was initiated when I realised that the water lilies were in bud at Loch Cill Chriosd.  I was keen to capture these transient and ephemeral blooms given their fleeting season, and the fact that their flowers become dormant and closed in relatively cold or inclement weather.  As it turns out, their season has now ended and all that remains are the plate-shaped leaves bearing the colours of autumn. 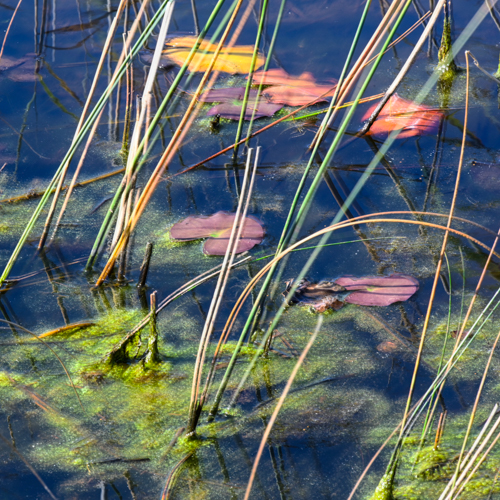 The second week of practice, which is the subject of this post, began on 13 August a day before my dog Henry passed away.  It has been a very sad time for me, not least because Henry has lain at my feet as I have written over 700 posts in this journal and worked on my PhD over the past two years.

More generally, he has been a significant part of my life for over sixteen years.  Even though he was always quiet and slept a lot of the time, a great presence and companion has now gone.  I have found that going to the loch and spending time on my own remembering Henry has been my way of dealing with his loss.  This reflection and review is necessarily tinged with sadness but is also a chance to take stock and perhaps assess whether my mood has been reflected in my photographic work or affected the sense of dwelling during this period.

I have found it hard to focus, whether it be writing blogs or capturing images.  In most cases I have reluctantly journeyed down to a place that ordinarily I have felt at home, comfortable and able to enter a zone of awareness and non-conscious Being.  However, in spite of my misgivings, I have felt more able to enter the zone more quickly and intensively than normal.  My periods of practice have been shorter but more effective.  While the mists of time might change that perspective, it is how I feel at the moment.

Freeman Patterson, the Canadian photographer stated that “the camera looks both ways” (Patterson 1977).  Indeed, my first research question is as follows:

“Does the camera look both ways, both visually and ontologically, into the Being of both the photographer and the subject.”

It seems that my experiences over the past few weeks provide the ideal opportunity to reflect on whether my photography has provided any insights into my interior world.

The day before Henry died, I spent time at the loch.  I recall trying to find lines of sight to reveal the interconnected world of the water lilies and using multiple exposure techniques to provide a glimpse of what lies below the surface.  The connections and entanglement of these plants being made as much below the surface, as fighting for light and space above the water.  Given that we had no inkling of Henry’s imminent demise at this time it is unremarkable that my intentions had continued from Week 1’s practice, although the march of time and the change of season had seen a marked shift in the colours and hues of the oval leaves and the disappearance of the flowers. 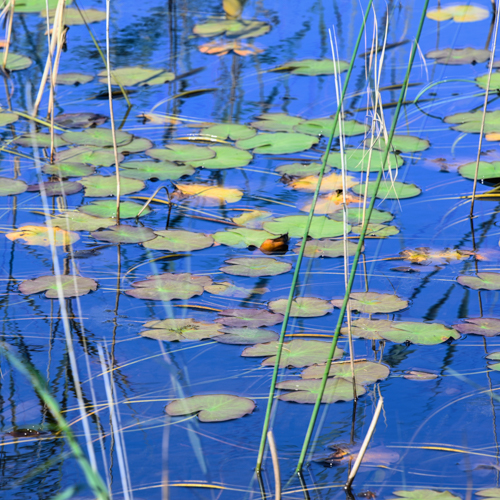 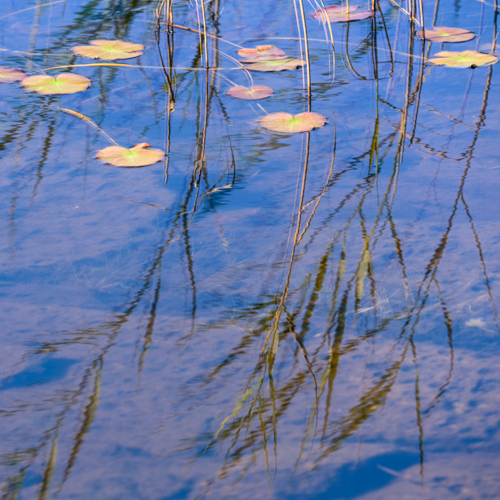 It was ten days before I picked up my camera again and this time it was to continue to work on the Edge of the Sea.  Remarkably, after this hiatus and a period where I had not felt I was making much progress in this work, I turned in a very successful photographic shoot.  The combination of wind and sun making for a dynamic and effective combination resulting in the first shots in this project that I felt had gone some way in producing the images I had visualised when I conceived the idea.  This feeling was supported by a number of positive comments from the followers of my blog. 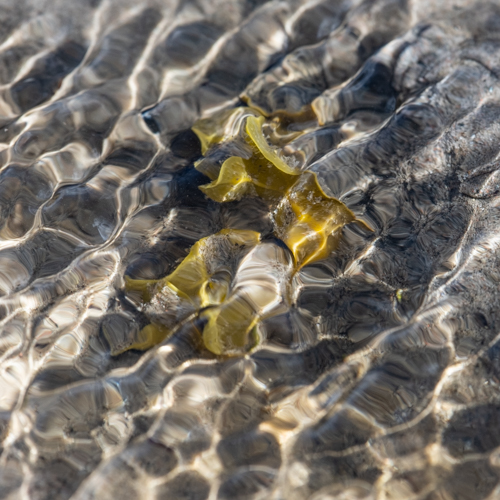 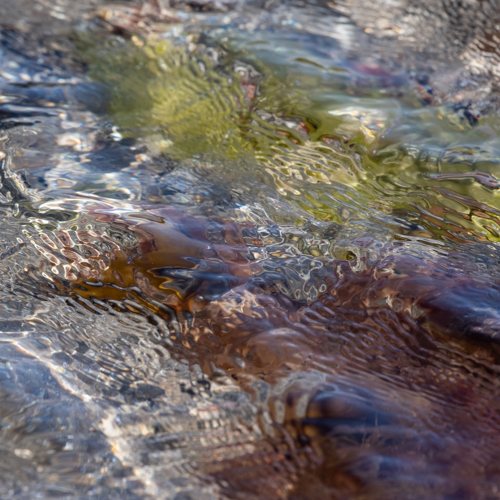 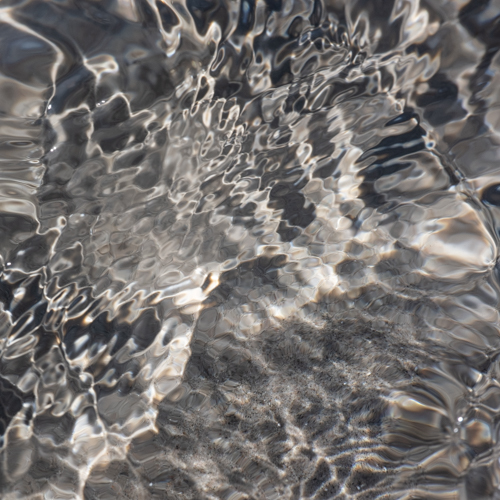 A further six days later I returned to the loch. The cold mornings characteristic of autumn had begun but we were blessed with some bright weather and the change in the season had continued in my absence.  I immediately felt that the opportunities for finding clear lines of sight to the decaying plate-shaped leaves had closed and a sense of chaos and claustrophobia had descended on the loch.  I was struggling to see the proverbial wood for the trees, and I recall feeling rather unnerved and frantic in my pursuit.  The balance between the reeds and the water lilies seemed to have turned and now the reeds had taken over, leaving the remains of the lilies swamped by the rampant grasses.  This sense of chaos was, of course, mirrored in the reflections. 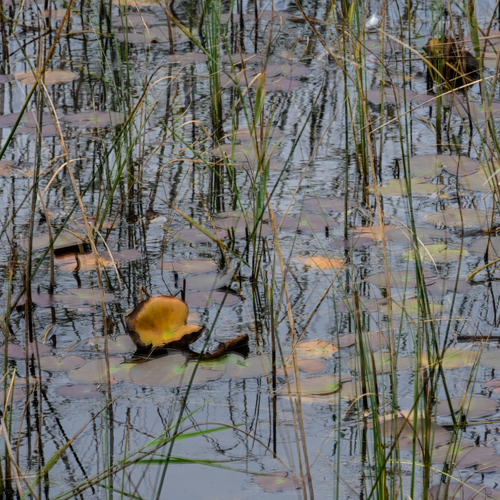 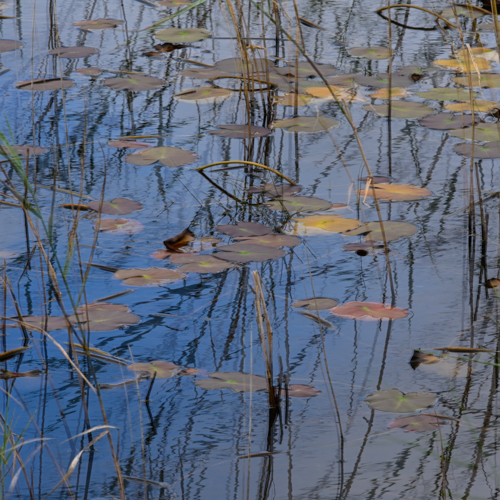 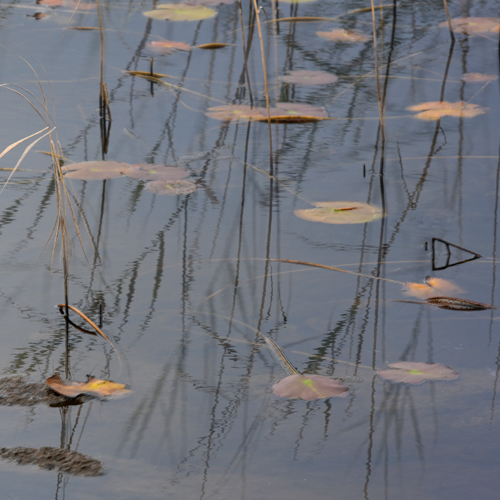 The following day I returned, and my images continue to reveal this sense of claustrophobia.  The reeds are restricting my view to that which lies beyond, and my personal feelings of imprisonment seem to emerge from the images.  If it is not the reeds themselves, then it is the reeds and their reflections, that restrict my ability to see beyond these resilient stems. 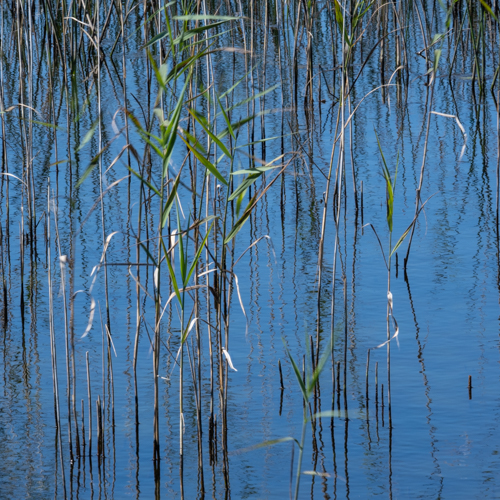 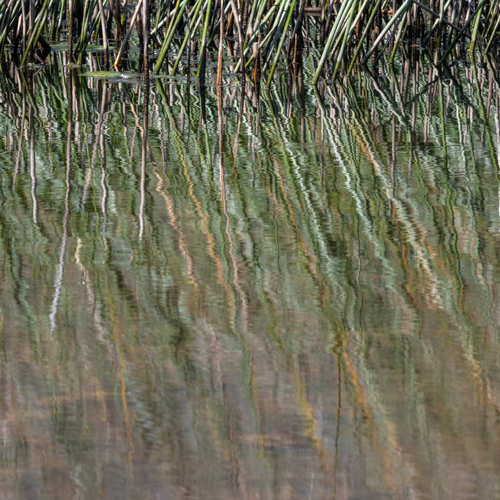 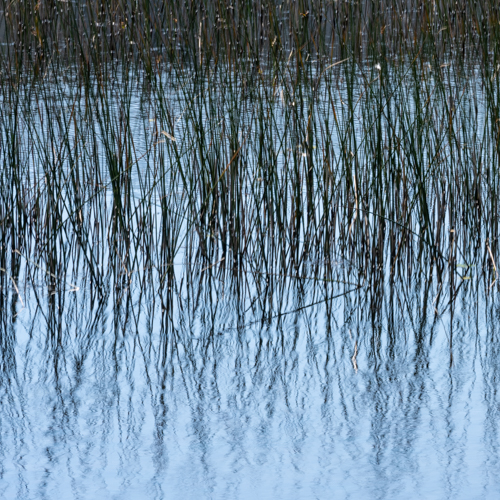 On the following day I was chased away by midges and only captured a handful of shots before their relentless biting overwhelmed me.  But, interestingly the images I did take in haste continued the theme of not being able to see beyond. . . 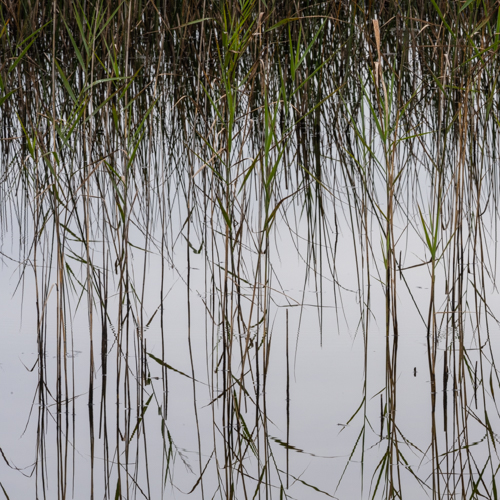 And on the last day of this period of practice the story continues.  This time, it is a combination of algae and reeds restricting my view, obscuring the route beyond these barriers and the decay and density on the loch’s floor. 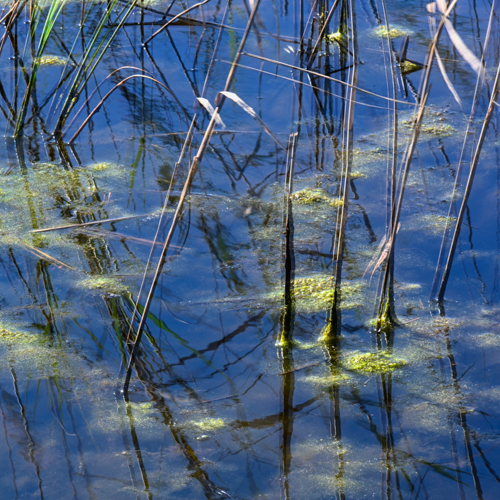 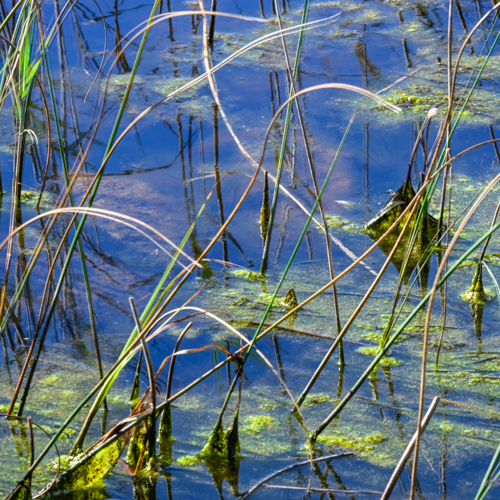 Then, finally I open up the viewfinder and the sparkling leaves of the water lilies shows my escape route and release of my feelings and lift the sense of entrapment. 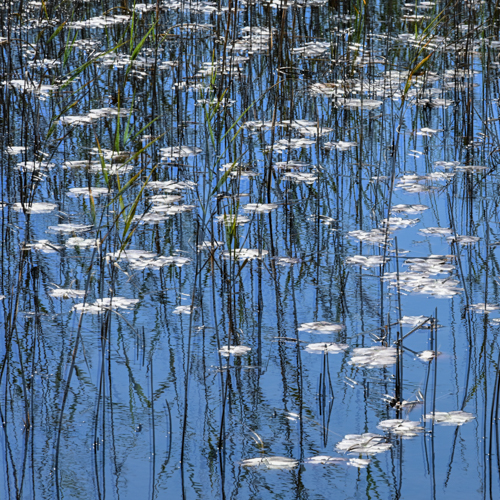 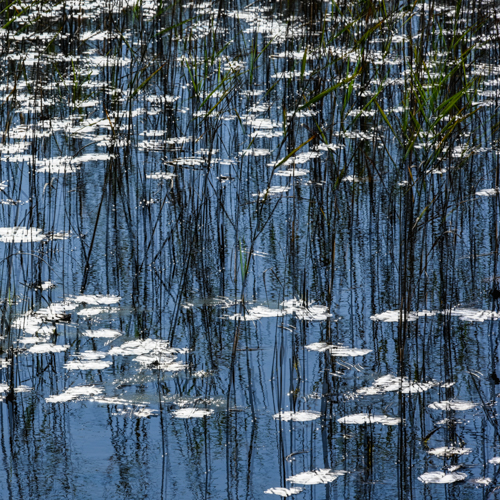 The question then is whether there is an alternative interpretation of my images, taken at a time of great sadness.  In these troubled times, did the camera look both ways as Freeman Patterson suggests.  At the time I rationalised what I had taken as simply a reflection of the reality of the loch at this time of year.  It is chaotic, the reeds are battered, and the water lilies are spent and it becomes increasingly difficult to find clear lines of sight.  However, it is certainly the case, that in spite of taking images at the same time of year before, the intensity and immediacy of the barrier imposed by the very subject of my work has not been evident.

Patterson, F. (1977). Photography for the Joy of It. Toronto, Van Nostrand Reinhold Ltd.

My name is Alison Price and for the past ten years I have travelled the world photographing wildlife, including Alaska, Antarctica, Borneo, Botswana, the Canadian Arctic, Kenya, Rwanda, South Africa, Zambia and Zimbabwe.
← Notes and Images from a Small Island (Practice 11 Day 10) Viewing Familiar Places with Fresh Eyes →