Winner of the Wildlife Photographer of the Year (Week 4)

Last week in my Journal I featured some of the commended images in the Wildlife Photographer of the Year 2018 and since then the overall winner has been announced.  The image, taken by Marsel van Oosten, and entered in the Animal Portraits section is of Golden Snub-Nosed Monkeys photographed in the Qinling Mountains in China.

The image is stunning and has all the elements required for a wildlife portrait.  I love the fact the photographer has chosen to show a good portion of the rainforest in which these animals live.  Often portraits are cropped too tight and lose the environmental narrative.  The light, especially on the adult, is perfect and not only lights up the animal’s face and eye and the distinctive blue nose, but also lifts the texture of the monkey’s fur such that it gives the impression you can reach out and touch it.  The baby provides a narrative and a sense of scale to the image.

I have also chosen to focus on an image of another primate.  The winner of the Behaviour: mammals category Richardo Nunez Montero is also an animal portrait with a heart-breaking narrative. 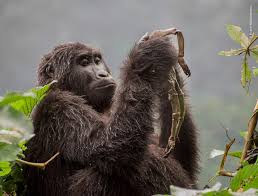 The image entitled Kuhirwa mourns her baby features a mountain gorilla from Uganda that has lost her baby but continues to carry the tiny corpse with her.

The eyes of the mother are fixed on the corpse in quiet contemplation and her face is framed by her arm.  The vegetation of the forest also provides a frame and gives context to where this drama is being played out.   The fur is well-rendered in what is a challenging environment in which to shoot.

My name is Alison Price and for the past ten years I have travelled the world photographing wildlife, including Alaska, Antarctica, Borneo, Botswana, the Canadian Arctic, Kenya, Rwanda, South Africa, Zambia and Zimbabwe.
← "In the Beginning" and a Marketing Plan (Week 4) A Daily Journal on Loch Cill Chriosd - Day 1 (Week 5) →