Robert Frank passed away recently so it seems fitting to start this post with one of his images of a funeral in Paris taken in 1951: 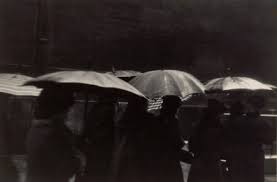 This image comes from Black and White and Things (1952).  Three copies of this handmade book were produced by Frank, one of which he gifted to Edward Steichen (the MoMA’s Director of the Department of Photography at that time).  It is spiral-bound, almost square and has a simple, austere black cover with Black and White and Things written in white.  The inscription reads:

(Steichen had provided Frank with his first museum exposure at the MoMA in 1950 in a group show Photographs by 51 Photographers.)

The book consisted of 34 gelatin silver prints grouped under the three headings of the title.  It was many years later before The Americans was published Frank then turning from still photography to film.

Frank’s image above has an impressionist’s aesthetic with rain drops over the umbrellas.  It is incredibly dark but the luminosity provides a sense of hope too.

Frank abandoned stills photography in the late 1950s in favour of film making and his return to the still form in the 1970s signalled a change in his approach and image making.  His work was more creative and he used a number of manipulative techniques such as scratching or painting on the negative, collaging and creating montages.  His photographs resembled film sequences or storyboards with implied narratives and the use of written text providing a commentary to his work.

Frank’s Trolley-New Orleans (1955) featured in The Shaping of New Visions: Photography, Film Photobook exhibition (2012) at the MoMA which explored the intersections between still and moving images, photograms and photomontages. 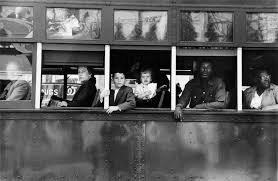 The image was part of The Americans (1958) and was the cover picture for the early editions of the book.  Frank had modelled his book on Walker Evans American Photographs (1938).  Ed Ruscha commented on The Americans as follows:

“Seeing THE AMERICANS in a college bookshop was a stunning, ground-trembling experience for me.  But I realized this man’s achievement could not be mined or imitated in any way, because he had already done it, sewn it up and gone home.  What I was left with was the vapors of his talent.  I had to make my own kind of art.  But wow!  THE AMERICANS!”

Perhaps unwittingly, Frank became the father of the snapshot aesthetic in the 1960s producing authentic images through a personal and off-hand style capturing the spontaneity of the photographic moment.

Frank understood the power of photographs as memorial evocation better than any.  He lost both of his children to untimely deaths and these tragedies shaped his work.  His daughter Andrea died in a plane crash at the age of 21 whilst still living with Frank at his home in Mabou.  This place served as somewhere to position her memory and rather than using grave markers he used other symbols in the landscape such as fence posts and telephone poles as recurring motifs in his work.  His film Life Dances on (1980) juxtaposes images of Andrea with footage of the Mabou coast. 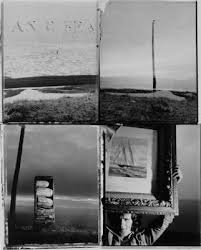 My name is Alison Price and for the past ten years I have travelled the world photographing wildlife, including Alaska, Antarctica, Borneo, Botswana, the Canadian Arctic, Kenya, Rwanda, South Africa, Zambia and Zimbabwe.
← Elemental by Melanie Collie (Week 14) Installation Plans, Exhibitions, Budgets and Framers (Week 15) →