Being Creative in Naples (Week -4)

I have spent the last few days in Naples on a Creative Photography course with Chris Weston and Simon Weir.  It was well timed following the submission of my coursework for Informing Contexts.  I feel that I needed some headspace to plan and consider my Final Major Project and so I hoped the time in Italy would allow me to do this.

The process over the three days was as follows:

On the evening we arrived we were asked to produce a list of adjectives that we thought described ourselves.  Mine were:

Day 1 – Discovery and Visualisation – Today is spent exploring the historic centre of Napoli with our specialist cultural guide, visiting La Sanitá and the Spanish Quarter. She will introduce you to the celebrated characters, urbanity and heritage of the district.

We learned a little bit about the history of the city and the district of Rione Sanita a suburb north of the city at the foot of the Capodimonte Hill and close to the old town of Naples.  The city was occupied by the Spaniards for a considerable part of its history.  Sanita was the home of the mafia, and until recently was not an area that tourists would have chosen to stay in.  However, a revival of the community through the efforts of a few individuals has improved the spirit of the area and rebelled against the mafia connections.  We focused our attentions on a very small area from the market square to the Cimitero Delle Fontanelle, a short walk away.  We were introduced to some of the key players in Sanita’s revival and heard their stories and views about the place.  Our guide Sophia was informed and entertaining and I feel we were given a real flavour and got under the skin of this now up and coming area.

At the end of the day we were asked to come up with the story or stories we wanted to tell about Sanita through our photography.  I chose three possible stories:

Although in some ways I was drawn to the first two ideas – being more literal – I felt that I would be able to develop my photography more, and have a greater learning journey if I focused on the third option.   My experience of Sanita was that it was overwhelming in terms of the noise, pace and scale of its streets.  The streets were full of people, speeding scooters and noisy traffic.  There seemed to be no sense of order or differentiation between the pavements and the road.  The pace was frantic and frenzied.  Added to which the hotel we were staying in also felt rather overwhelming to me in terms of its décor, contents and atmosphere – an old, grand and imposing building with everything in its place but so much of it – including skulls and stuffed birds.

Day 2 – The 20-Frames Challenge – Prepare yourself for the greatest photographic challenge of your life! With a customised, fixed lens camera, restricted to just 20-frames, your task is to tell your personal story about Napoli. Your tutors will be available throughout the day to coach you in the task. In the evening, there will be time to select and edit your images before we hold a detailed image review.

This exercise was designed to make us think before we take the shot and only press the shutter after full consideration of our options and choices.  We were asked to produce one successful image, one less successful and one possible but needing some help with making it work.

As we left the hotel the rain was pouring down on us and our cameras.  The camera was unfamiliar and felt uncomfortable in my hands.  I was a bit afraid to press the shutter in case I wasted any of the small number of shots I had available.  After about half an hour I pressed the shutter, not sure whether it had fired.  I became tense and anxious in this unfamiliar territory and missing my Nikon Z7.  As we worked the scenes, I became a bit more assured and started taking images with intentional camera movement to capture the speeding scooters in the streets.  I soon used up my twenty images and returned to process my efforts.  Initially I was not very happy with them but as I reviewed them more carefully, I became a little bit more hopeful.  These are the images I produced:

This was an image I took early in the day and my intent was to show how the large and imposing murals around the city contributed to my feeling of being overwhelmed.  I do not believe I was successful for a number of reasons.  I struggled to find the right location from which to frame the shot and as a result I failed to give it the context it needed.  I also feel that a lower shooting position would have improved the image.  More significantly, I did not choose the mural well as some of my colleagues on the course pointed out.  The mural image is actually a joyous one which did not relate to the narrative of the city being overwhelming. 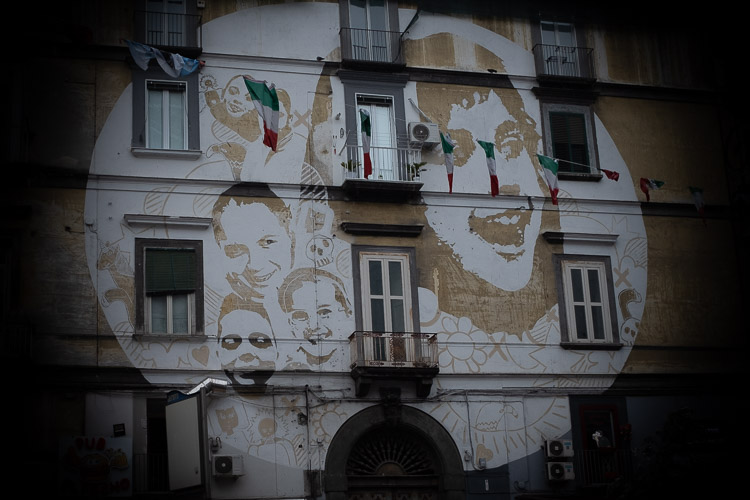 The first thing I noticed as I wandered around Sanita when I arrived was the washing hanging from every balcony.  This contributed to my theme of Living in the Street.  I took a lot of shots looking up at the washing from the narrow streets although this was difficult as it was pouring with rain.  As a consequence I tried this shot instead.  Although it is “very Naples” as our guide commented, I do not believe I executed it well.  It has all the right components – the crumbling facade of the building the air conditioning unit, the washing and the awning – but somehow it doesn’t work.  I think it is the angle of view which unbalances the image. 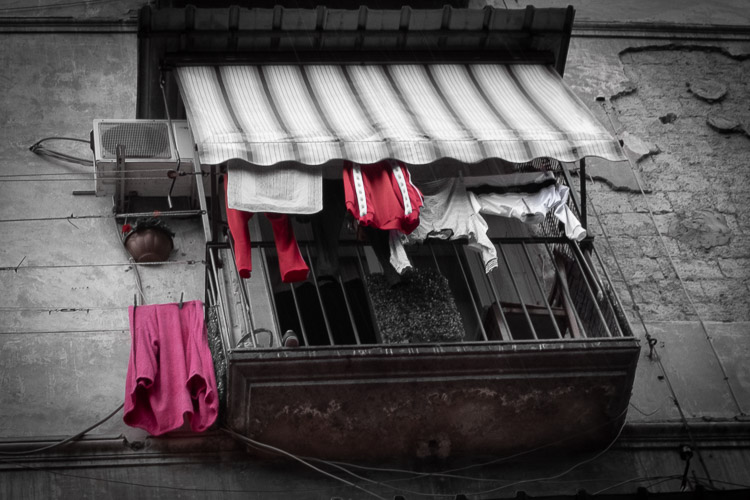 I took a number of shots of the speeding scooters, usually on the pavement, to give my sense of the chaos and maelstrom of the city, and my experience of being overwhelmed.  I captured the ghost like figure of the scooter and the moving person on the left of the image, while rendering the background sharp.  I think it was the most successful of my images and the treatment in black and white helped to give a sense of movement more effectively than it did in the colour version.  I was kneeling on the pavement, close to a junction, and got as close as I could to the speeding scooters.  The cobble stones were very wet which for me enhanced the image further. 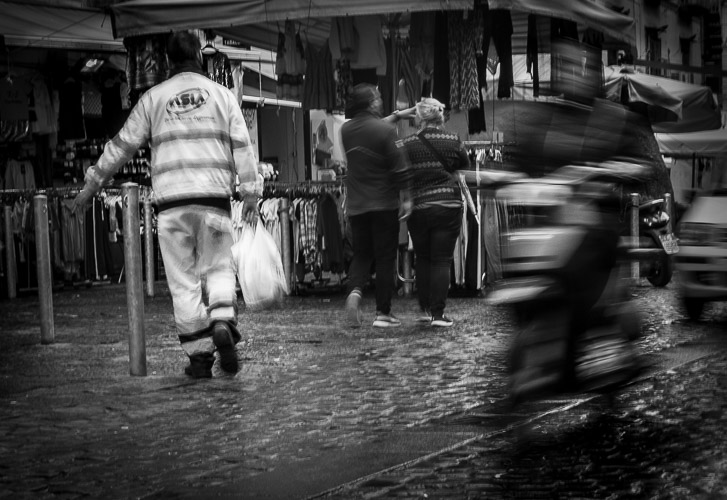 I gained some helpful feedback on my images and my successful image was widely seen as working and telling the story I intended to.

Day 3 – At Your Own Pace – Armed with the technical, compositional and creative knowledge gleaned from the past two days, today is an opportunity to explore Napoli at your own pace, with your own camera – no restrictions. In the evening, again there will be time to select and edit your images before we hold another detailed image review.

I decided to try again with not only my less successful images but also with the one that had been considered successful.  I felt I could tell my story and experience of Sanita more strongly than I had been able to do with an unfamiliar camera and after the previous day in the field.  I revisited the sites and subjects of my images and also spent some time at the haunting but tranquil Cimitero Delle Fontanelle.

These are the images I produced for review:

I searched for a more effective mural than the one I had previously shot.  This for me better tells my story.  I shot from a low angle, close to the image but keeping some contextual information in the foreground.  I also chose a square crop to enhance my narrative. 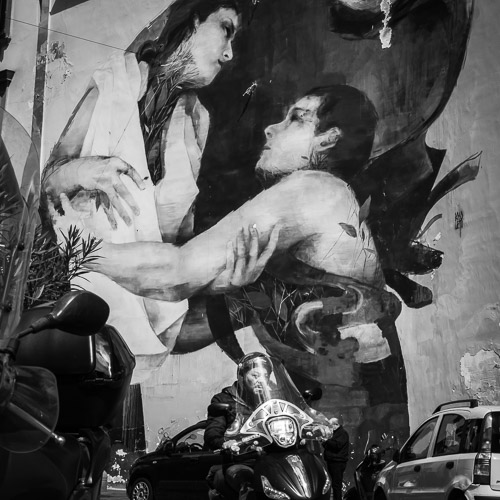 I spent some time at the Cimitero Delle Fontanelle.  I struggled at first but enjoyed trying to find the right natural lighting and composition for the shot.  There were many skulls all piled up or in little wooden boxes.  I wanted to show the randomness of the scene.  I have some more from this site that I would like to work on but in the time I had available I chose this one.  I liked the diagonal composition, the square crop and the clarity and definition in the skulls. 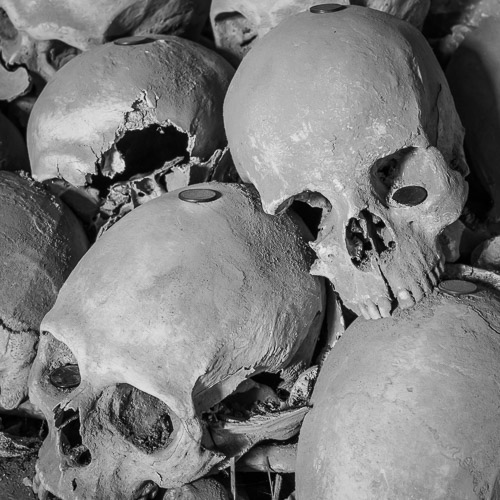 Finally, I revisited my speeding scooter shot.  One minor point that was made in the feedback session was that there was no indication in the picture that it was Naples.  I chose the opposite side of the road from my original position which allowed me to include the sign on the balcony.  The “Marianna” sign also gives a sense of where the street scene might be.  I wanted to capture more scooters to increase the overwhelmingness of the image.  I also realised that the intense colours in the city added to the overwhelming feeling for me – so I left it in colour.  I also think the stationery scooter in the right hand corner helps the image. 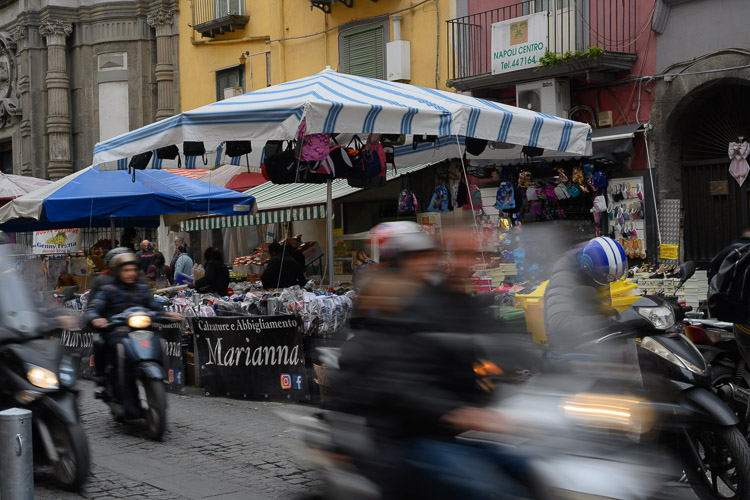 I enjoyed my time in Naples and was reminded of the importance of narrative in my images and the need for a photographer to also be a storyteller.  Another useful reminder is that when I finish my MA Photography I will need to continue this discipline in my photographic projects in order to ensure focus and success in my work.  There is no point in taking the photograph unless I am clear about the story and the potential image contributes to that story.

My name is Alison Price and for the past ten years I have travelled the world photographing wildlife, including Alaska, Antarctica, Borneo, Botswana, the Canadian Arctic, Kenya, Rwanda, South Africa, Zambia and Zimbabwe.
← Critical Review of Practice complete (Week 12) Seascapes and Hiroshi Sugimoto (Week -3) →