The Gaze, the Body and the Landscape (Week 5)

As part of our coursework we were asked to consider our ‘gaze’ in relation to our photographic practice – where is our gaze, are we a voyeur, how do we look at and understand the world and how does photography contribute to this?

My gaze is firmly fixed outdoors in the natural world of wildlife and landscape and primarily looking for metaphors.  Although I enjoy observing the world around, I do not feel that I am primarily a voyeur, but rather someone actively participating and ‘being’ in the landscape.  I spend a significant amount of time taking in the experience of the natural world and then finding ways of sharing my experiences with others.  This often includes writing in my journal as well as making images.  My experience in the landscape allows me to access my feelings and emotions about the object and its interactions with the world.  Photography allows me to search deeply within myself but also provides me with a way of expressing myself.  I guess photography legitimises me doing this.

I am sure my police work has had an impact on my gaze in terms of composition, technical skills and my approach to my work.  I look particularly for shapes, form and texture in my imagery which is predominantly monochrome.  I often use metaphor to explain my world and engage with the viewer and share my feelings and emotions through natural objects.

I found the presentation The Body and the Land an interesting summary of how representations of the land have involved a dialogue with people.  For Edward Burtynsky his focus is on the degeneration of the landscape and his large-scale images of man’s impact on and abuse of the natural world give a powerful message. 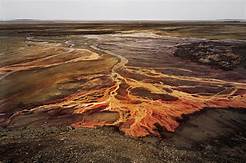 Very different to the pictorial, celebratory and unspoiled landscapes of Ansel Adams. 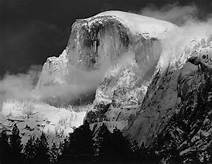 Whilst neither photographer used figures in their work Adams did counter the charge by saying there were at least two people in an image – the photographer and the viewer!

A number of references to the way we view the landscape were identified in the presentation and a similarity is drawn to how we might view the female body and consider the natural world – that is through a ‘male gaze’ (depicting the world from a masculine and heterosexual and western point of view).  It is argued that even our use of narrative includes terms such as mother nature and a virgin landscape and men are often seen as undertaking leisure pursuits that might be considered as conquering and taming the power of nature.  For example, it is argued that David Friedrich’s painting of Casper exemplifies this sense of control and masculinity: 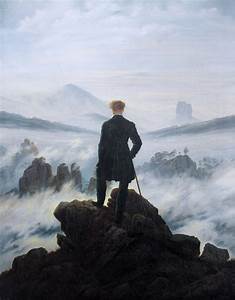 John Barrell on the other hand suggests that images of agricultural labourer in British painting, often with limited facial detail or with their backs to the viewer, serve to reinforce the weakness of these figures in the landscape and in society more generally.

In Of Mother Nature and Marlboro Men – An Inquiry into the Cultural Meanings of Landscape Photography, (1985) Deborah Bright argues that landscape images are selected and constructed not only in terms of what has been included and excluded but the historical and social significance of those choices.  An image is a record of human values and actions and their impact on the land.  Bright goes on to articulate the questions that need to be addressed:

“The sorts of questions we might ask concern what ideologies landscape photographs perpetuate; in whose interests they were conceived; why we still desire to make and consume them; and why the art of landscape photography remains so singularly identified with a masculine eye.” (Bright 1985:2).

I was interested in Bright’s discussion of the work of Paul Strand and Alfred Stieglitz working in the American School of “straight photography.”  Derived from Symbolism, forms of nature were seen to express the photographer’s emotions at the point the shutter is pressed – The Equivalent.  Edward Weston’s notion of pre-visualisation developed this approach along with Ansel Adams romantic images of the landscape serving to reinforce the political message of America as the leader of the “free world.”  Stieglitz’s idea of the Equivalent that a photograph is a visual metaphor for the feelings of the photographer rather than a record of the subject, was reborn by Minor White, the editor of Aperture in the 1950s and 60s.  He saw these forms of expression and intuition within photography as central issues and not merely a matter of visual style.

After a blistering attack on John Szarkowski for including few women in his curated exhibitions Bright articulates a “women’s landscape photography” which emphasises more intimate and emotional relations to the environment rather than the predatory model of the “male gaze”:

“Men choose to act upon nature and bend it to their will while women simply are nature and cannot separate them selves from it.” (Bright 1985:10).

Bright finishes with a suggestion for how we might ‘save’ landscape photography by using it as a means to question assumptions about nature and culture. and become more conscious of our ideological assumptions that structure our approaches:

“Landscape is not the ideologically neutral subject many imagine it to be.  Rather, it is an historical artifact that can be viewed as a record of the material facts of our social reality and what we have chosen to make of them.” (Bright 1985:11).

Personally, I find Bright’s approach unhelpful and outdated – after all this article was written in 1985, a wholly different world to today.

I have found it helpful to consider aspects of gazing, how the way we look might be culturally shaped and how we view the world through hidden ideologies.  It will be helpful for me in my photographic practice to be aware of my own predispositions and to inform my understanding of how my audience might view my work.

Whilst I understand the concept of the male gaze and how it might influence photography and the way an image might be perceived I am concerned that the concept of gaze reflects a view of perception that is now significantly outdated by both theory and experiment in the psychology of vision.  Within the concept of the Bayesian brain and the hierarchical predictive processing model, the idea that there is a “non”-gaze is impossible.  Both theory and experiment support the idea that all we see is what we look for and at.  We are in a permanent state of gaze and as a result the concept of ‘gaze’ versus ‘non-gaze’ is empty of meaning (male or otherwise).  What differs, is the structure of beliefs and attitudes, if you like, the individuals mental model of the world, which directs what it is we look at.  So, the only thing that matters is whether or not there is any significant difference in the way males and females see the world and that takes us into the area of gender, equality and inclusion.

My name is Alison Price and for the past ten years I have travelled the world photographing wildlife, including Alaska, Antarctica, Borneo, Botswana, the Canadian Arctic, Kenya, Rwanda, South Africa, Zambia and Zimbabwe.
← Metaphors of my Mind (Week 5) My Personal Vector of Difference (Week 5) →