“Oh! for the crags that are wild and majestic,

When deciding to stop in Edinburgh on my return from Skye the exhibition Wild and Majestic – Romantic Visions of Scotland at the National Museum of Scotland was the main reason. 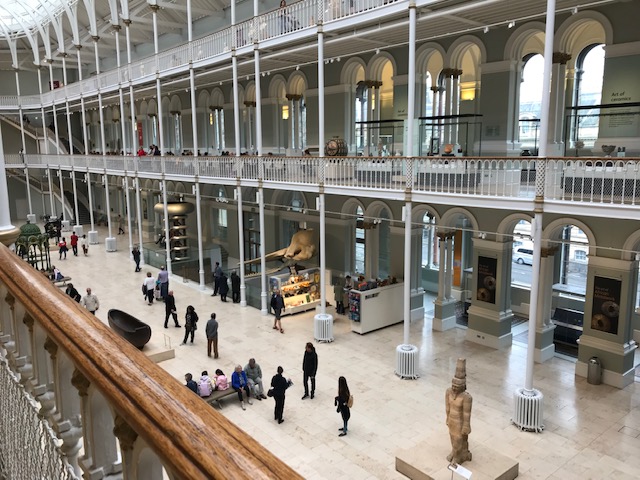 My tutor had suggested that research about the visual representation of Scotland through history might inform my work and approach.  The accompanying pamphlet summarised the exhibition as follows:

“Dramatic Highland landscapes, heroic histories, tartan and bagpipes are among the defining images of Scotland for many people around the world today.”

The exhibition explores these ideas from the Romantic movement of the eighteenth and early nineteenth centuries, to Queen Victoria’s Balmoral and how not only artists, but poets and composers contributed to the artistic representation of Scotland in words, music and paintings.

The exhibition begins with one of the most enduring landscapes of Scotland Landscape with Tourists at Loch Katrine: 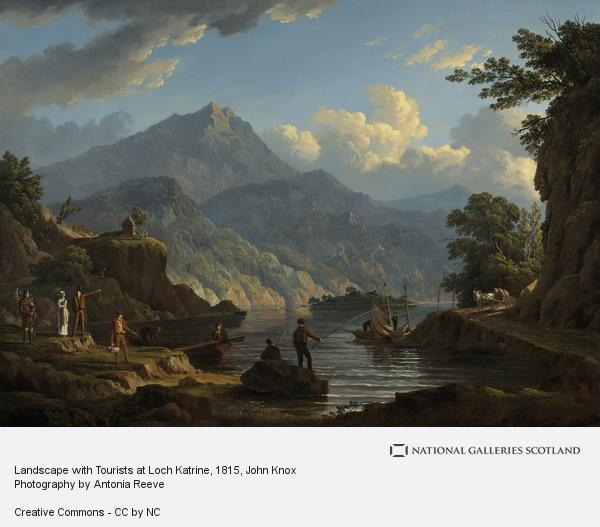 For me, this painting encapsulates the romantic and prevailing vision of Scotland – the sublime beauty of Loch Katrine, tourists entertained by a tartan-clad piper while they wait to board a ferry to an Island.  This painting was the inspiration for Sir Walter Scott’s poem The Lady of the Lake which was also a contributing factor in encouraging the tourists of the day.

The growing Romantic movement across Europe led to Scotland and its people being considered as heroic and romantic rather than primitive and dangerous.  The Highland Society of London was established in 1778 and did much to promote their homeland into British political and cultural establishment while campaigning for the restoration of the previously-banned Highland dress and the promotion of the use of Gaelic language.  They promoted the establishment of new towns and villages, the building of roads and bridges, the reform of agriculture and fishing activities and the growth of new industries.  In the meantime Highland soldiers were seen as playing a conspicuous and significant role in the British army.  The romantic captivation with Scotland permeated the Royal family exemplified by the visit of King George IV to Edinburgh in 1822: 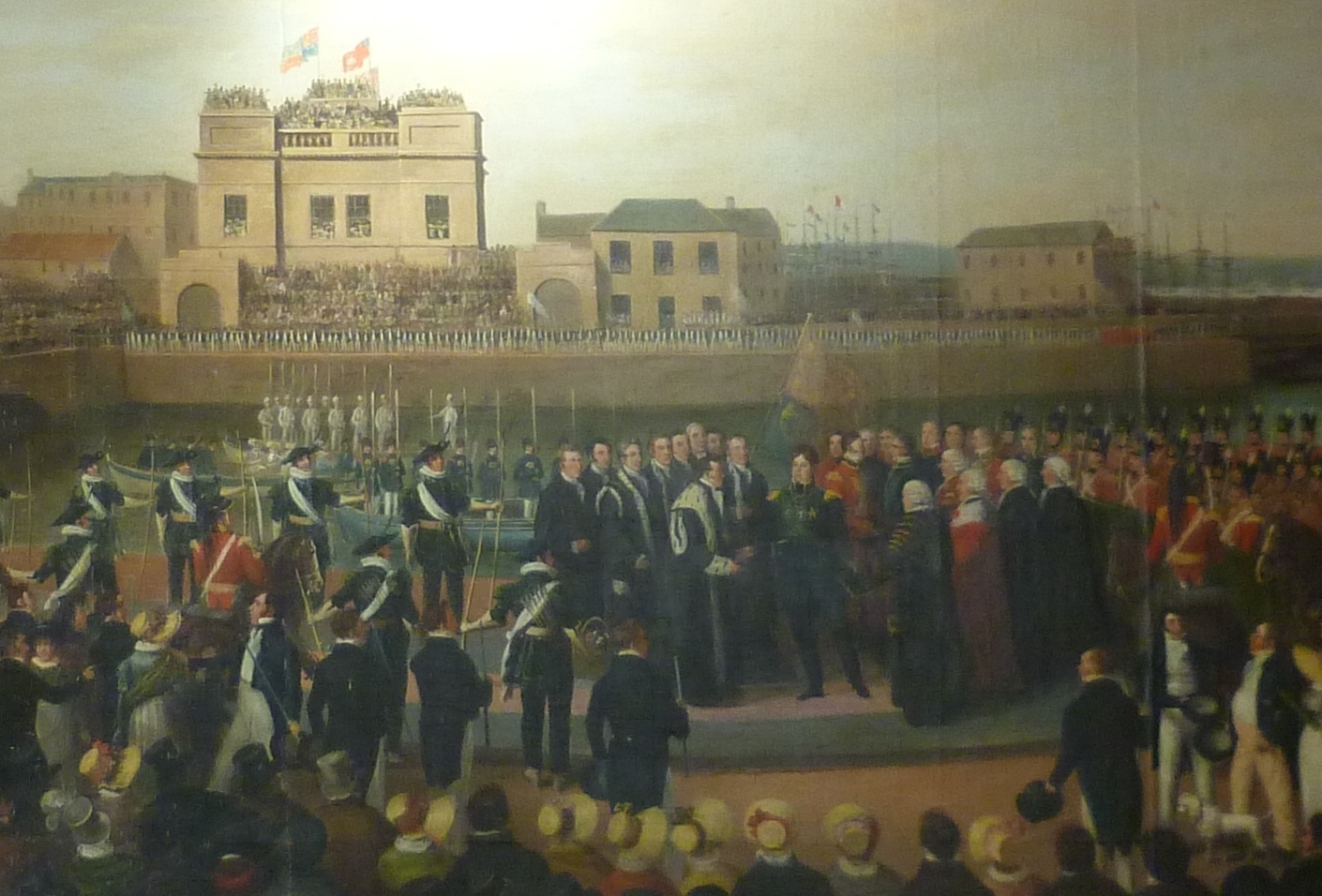 However, the Royal visit perpetuated a romanticised ideal at a time of social and economic turmoil in the Highlands and much of the pageantry was given a Highland character vocally criticised by the Chief of Glengarry.

From the late eighteenth century onwards Scotland became a popular location for the rising number of wealthy tourists with the railways opening up travel to the region.  In 1772 it was proclaimed in The Weekly Magazine that:

“It is now become fashionable among the English to make a tour into Scotland for some weeks or months . . .”

and as Robert Burns commented:

“My journey through the Highlands was perfectly inspiring, and I hope I have laid in a good stock of new poetical ideas from it . . . “

In turn the visiting painters, writers and musicians (such as William Wordsworth, JMW Turner and Felix Mendelssohn)  created their own interpretations of their visit and the landscape inspiring more visitors – a growing number of them choosing to experience deerstalking, grouse shooting and salmon fishing.  The Highlands were becoming a playground for the wealthy.   Queen Victoria explained the attraction and played a significant part in perpetuating the romantic vision of Scotland alive:

“There is a great peculiarity about the Highlands . . . a wildness, a liberty, and a solitude that had such a charm for us . . .”

In Wild and Majestic – Romantic Visions of Scotland Watt and Waine conclude that:

“The romantic ideas about Scotland that were first popularised during the 18th century are still with us today.  While these ideas represent only a partial picture of this country’s culture and history, they were not merely inventions.  Behind the cultivation of this romantic image, there lay a genuine desire to preserve traditions that were seen to make Scotland unique.

The wild and majestic beauty of this country, and the sense of the past which it evokes, still fire our imaginations.  Now, just as 200 years ago, Scotland’s landscape, music, dress and history continue to be sources of pride and inspiration.”

As the curators acknowledge, this Exhibition provides only a partial, but nonetheless, pervasive glimpse of how Scotland has been represented in visual media.  They rightly acknowledge that a romantic narrative of Scotland’s history and past continues to this day.

In my view, and to a certain extent, the representation of the Isle of Skye continues to be depicted in this romantic way, through the prevalence of super-saturated images in the postcard vernacular and aesthetic, designed to remind tourists of their visit.  In addition, the landscape of Skye is used to portray historical and fictitious events in films and serials such as Rob Roy and Outlander, even though it is claimed that Rob Roy did not visit Skye.  I would contend that a significant number of visitors to Skye are not choosing to do so for its beauty and history, nor to experience its essence, but more to tick off various film locations on their mental check list.  Furthermore, the images they take home (mentally and physically) do not represent the harsh, wild and woolly weather of the Island or its mystery and hiddeness.  They are being sold a romantic dream rather than experiencing the essence of Skye.