I was doing some research on Thomas Joshua Cooper one of the most distinctive landscape photographers today.  Although born in California he has lived and worked in Scotland for most of his life heading photography at Glasgow School of Art for many years.  Cooper loves to work at the extremities of the world using his nineteenth-century Agfa Ansco view camera, he is a traveller – what you might call a nomadic artist.  Los Angeles County Museum of Art (LACMA) currently showing The World’s Edge says of his work:

“His singular exposure of each site includes neither a horizon line nor the terrain below his feet, but rather the surrounding “sea spaces” that are unique, dissimilar, and not readily identifiable.  For him each place is a point of departure allowing contemplation of the ocean’s emptiness beyond the extreme points of land.” (LACMA 2019). 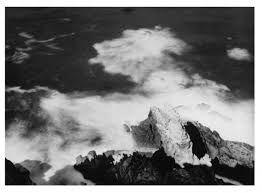 I came across an interview with Cooper by Tim Parkin from On Landscape in 2017.  The interview was wide-ranging and the outcome of a four-hour meeting with Cooper covering a lot of ground.  However, there were two significant sections for me, ones that I related to in terms of my own photographic process and practice.

The first is an exchange between Colin McClean and Cooper about the moment when you start composing a photograph:

CMcC:  “There’s a moment when you are intently composing a photograph . . . I don’t think I’ve every done anything else where I’m so fixed.  Moments when I get my tripod out and start to assemble it.  I just love that experience.”

TJC: “It’s a very beautiful moment and it’s cerebral and a genuine experience.”

CMcC: “A lot of people don’t experience it.”

TJC: “Well that’s okay too, they’ll experience something else but you can damn well bet that you can tell pictures that are the result of glancing and tell pictures that are the result of gazing and I’m interested in that process.  There is something that seems so fixed about a camera on a tripod but actually you realise that that moment is actually the beginning of the process as opposed to the conclusion of it, prematurely.  This whole series of improvisational possibilities that are just wonderful.”

I find this exchange very interesting and can relate very much to not only the excitement of taking my camera out of the bag but the feeling as it is perched in my hands – I enter another world.  I feel the camera is an extension of me and that it is in some way connected to my body.  Not only that, I find the process of taking a photograph a mindful and meditative experience.  If I do go out with a group of photographers, which is rare these days, my companions know not to disturb me.  They also know if they talk to me or try to strike up a conversation then they are unlikely to get an answer, or indeed any signal from me that I have even heard them.  I used to think it was that I was engrossed with the wildlife and the moments we shared and that connection between the eyes of the animal and me – that momentary shared understanding.  And, I am sure it was all of those things.  But, it was and is more than that, when I have a camera in my hands I enter another world – an interior world – a world that is so familiar and intuitive that I rarely think about the technical skills required to make the image.  I am almost in a trance.  I can think of at least two occasions when I was so disconnected with the outer world that I failed to notice the raging migraine I had induced by the intense focus on my craft.  My first time in Africa at Victoria Falls I was staring in wonder at Victoria Falls.  As I looked through the mist I saw an elephant walking along the edge.  After an hour’s worth of shooting I finally realised a had a debilitating migraine and was barely able to walk back to the hotel.  Similarly, in India, following leopards at sunset, I failed to engage with the rest of the group for around an hour but returned to the exterior world with the mother of all headaches.  For me, this is about the process of taking photographs.

The second one, a quotation from Cooper is about the interior world that some of us inhabit and the ways we enter this world:

“I think I realised that for what I wanted to do photographically, the first thing that had to happen was to be able to interiorise the outside to make sense out of it, to remove it from being an ‘out there’, a place away, to at least pictorially suggest an ‘in there’ or an ‘around there’ type of place.

It’s about gazing as opposed to glancing.  Two primary conditions, not oppositional but, not necessarily in the same kind of frame.  One condition is about acknowledging the pleasure of the glance, and it is fantastic.  I can’t do it though.  I was never ever able to do it, in spite of my love for Cartier-Bresson, my admiration for Koudelka, my devotion to Smith and more particularly Robert Frank.  There is a point at which glancing has the same capacity to pierce, as gazing.  The pierce is what I’m interested in.  I just can’t do it though.  I’m clumsy, I’m slow brained and I’m really physically awkward.” (Cooper in Parkin 2017).

Over the period of the MA, I have slowed down my practice significantly and spend hours in the landscape.  Yes, I glance around the immediate area to find my spot for the shoot but then as Cooper describes I begin to gaze.  I would argue that most tourists and locals on Skye rarely if ever gaze.  The tourists are busy ticking off their must see locations and the locals going about their daily business.  When I come across other photographers they rarely stay longer than five minutes.  Once the picture they wanted “is in the can” they leave but, I would argue, they have only engaged at a superficial level. Gazing for me is spending time in the landscape, absorbing the scene and the whole experience.  That can mean, sitting for hours, allowing my inner thoughts to flow, and for the real Skye to reveal itself to me.  While working at Loch Cill Chriosd, passers by have asked me what I was photographing – a little concerned that perhaps I have missed the undeniably beautiful landscape scene across the water.  For me, Skye reveals itself through gazing at the patterns, shapes and changes of mood of this tiny stretch of water covered in reeds, rather than glancing across the wider view.

As human beings we all hold a mental model of the world, which we seek to update primarily by scanning for differences and change.  It is those things that grab our attention and for me represent the difference between glancing and gazing. By continually moving on, you never give yourself time to start gazing.  I wait for this moment and rest my attention in the landscape and through that process I attenuate the conscious (the chattering monkeys), calm down and gaze – a meditative process elevating non-conscious awareness.  Why is this important?  It is because the non-conscious operates through a process of emotional activation and pattern matching, emerging from archival memories and experiences that lie at a level  beyond conscious recall.  And, I believe, it is through habituation of this process, what Cooper calls ‘gazing’, that the voice in my photography is given expression.   In order to gain consistency in this voice, I have sought to  deploy a constant strategy of emotional activation in my work.  ‘Emotional energy’ is the ‘fossil fuel of thought’ and through its activation deep layers of experience and practice come to the surface in the moment and impel the pressing of the shutter.  As a police photographer, early in my career, I was, at one level, fortunate in that the powerful emotional ‘taggiing’ associated with the work helped me embed the deep technical skills I need to be accessible in the moment, when Skye ‘drops her veil’ and her real beauty is revealed.

My name is Alison Price and for the past ten years I have travelled the world photographing wildlife, including Alaska, Antarctica, Borneo, Botswana, the Canadian Arctic, Kenya, Rwanda, South Africa, Zambia and Zimbabwe.
← Preparing for my 1-2-1 with my tutor and our discussions (Week 17) More on Drive (Week 17) →