We have been encouraged to use our Critical Research Journal as a means to try and develop our ideas and “critical lenses” for contextualising our own photographic practice and not necessarily providing finished and polished posts.

As a historian I have a tendency to try to pigeon-hole certain periods of time with clear and recognisable approaches, preferences and ideas. As a consequence I have been struggling to understand “Modern” and “Postmodern” art and photography through identifying photographers, artists, characteristics and styles that might typify or represent a period in time.

Liz Wells explains the futility of my approach as follows:

“There has never, at any one time, been a single object, practice or form that is photography; rather, it has always consisted of different kinds of work and types of image which in turn served different material and social uses.”  (Wells 2015:21).

I would argue that “Modern” and “Post Modern” are relative terms and therefore only have meaning in relation to other words or terms.  Often it is easier to say what they do not represent rather than what they do.  Therefore, for me to try to move directly from these terms to clarifying what they represent and who might be a practitioner demonstrating an affinity with these approaches is futile.    In my view the only meaningful way to proceed is to start with the particular and then refer back to the signifier.

I have long been fascinated by Antarctic exploration and Shackleton’s Endurance Expedition in particular.  Not least because of the unforgettable images of Frank Hurley, the expedition photographer.  For me Hurley’s images represent a time, a style and approach that epitomise “modern”, or indeed “high modernism”, as Rawlinson describes it in his Tate paper in 2010.  Although, Rawlinson uses references to the literary world such as the work of Henry James and T S Eliot I would argue that “modern” applies equally to the photographic images and style of Frank Hurley. 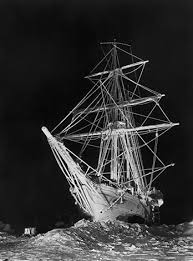 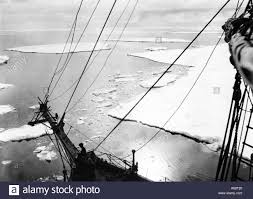 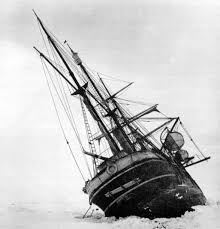 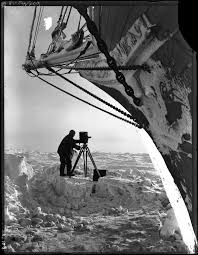 In The Enduring Eye, Alexandra Shackleton described Hurley as follows:

“Hurley was described as a ‘warrior with a camera.’  He was happy to climb the mast of the ship carrying the heavy brass and mahogany camera and willing to lie down in front of the moving ship.  Getting the results was everything.  His amazing black and white images not only provide an unrivalled record of the events of the expedition but they are astonishingly beautiful.” (Shackleton in Hooper 2016).

“Photography renders the unbelievable real.  When history began to be recorded on glass plates and celluloid, humanity’s most extreme endeavours gained a silent witness.  Without the cameras that young Frank Hurley took south with Ernest Shackleton in 1914, the world would have struggled to believe this extraordinary story: the loss of the ship in Antarctic pack ice at a location beyond rescue, the camps on ice floes, the sled-hauling, hunger, cold and comradeship, the perilous voyages in open boats and that final, famous passage across 850 miles of ferocious sea to South Georgia and safety.” (Crane in Hooper 2016).

Hurley’s meticulous approach to composition, angle, of view, staging and drama, even in the most challenging of circumstances demonstrate key characteristics of the modern era.  The first image above is iconic and a visual representation of the Antarctica era and modernism.  As Alexandra Shackleton explained:

“The vision of the frost-covered ship, set against the dark, polar night is perhaps the best known.  Hurley got the effect by putting 24 phosphorus flares around Endurance without telling his companions.  She looks fairy-like in her beauty.” (Shackleton in Hooper 2016).

Modernism was at its height in the 1920s and 30s and photography was providing facts and images to the political influencers of the day. It showed us a world that had never been seen before. Photographers had a preference to the form of images and provided new angles of view. Photography was now allowing for the world to be seen from unfamiliar viewpoints – from the top of buildings or through a microscope. Photographs provided factual images of a moment in time in an ever-changing world. But photography was more than this and was considered by the likes of Walter Benjamin as a democratic medium.

The artist and photographer Moholy-Nagy talked about the objective starting point:

“Everyone will be compelled to see that which is optically true, is explicable in its own terms, is objective, before he can arrive at any possible subjective position.” (Moholy-Nagy in Wells 2105:22).

I found the image “Steerage” by Alfred Stieglitz and the way he described it as a very clear example of the priorities of the modern photographer: 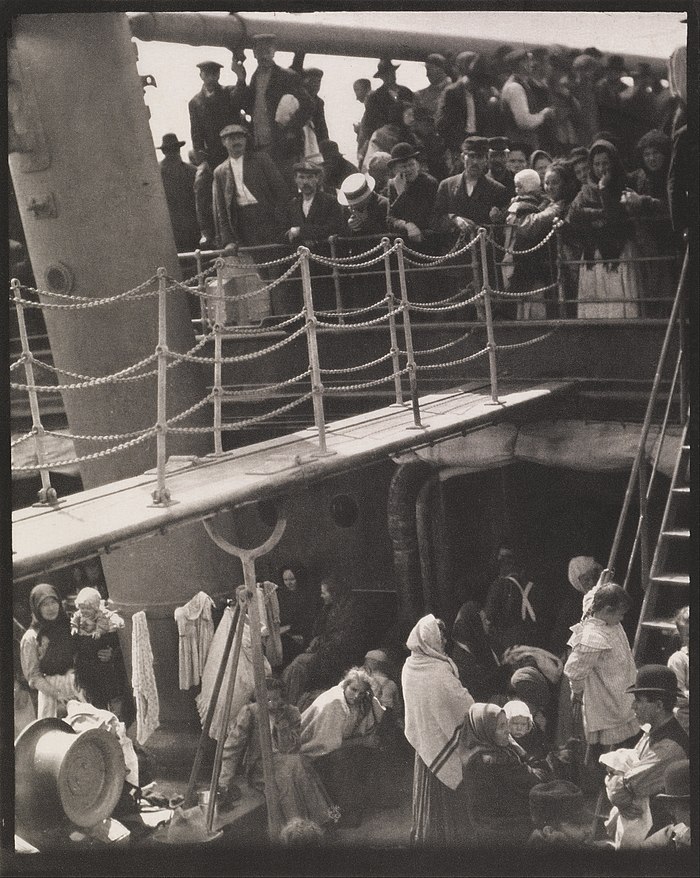 To the left was an inclining funnel and from the upper steerage deck there was fastened a gangway bridge that was glistening in its freshly painted state. It was rather long, white, and during the trip remained untouched by anyone.

On the upper deck, looking over the railing, there was a young man with a straw hat. The shape of the hat was round. He was watching the men and women and children on the lower steerage deck…A round straw hat, the funnel leaning left, the stairway leaning right, the white drawbridge with its railing made of circular chains – white suspenders crossing on the back of a man in the steerage below, round shapes of iron machinery, a mast cutting into the sky, making a triangular shape…I saw shapes related to each other. I saw a picture of shapes and underlying that the feeling I had about life.”

When viewing this image for the first time and knowing its title was Steerage I immediately saw the juxtaposition between the well-dressed and wealthy people joining the boat on the upper deck and those with less material wealth boarding from the lower levels. I was not drawn on this occasion to the composition and form of the image but the story-telling.

Although Paul Strand saw the subject of the photographic image as part of a wider context he continued to be influenced by form, pattern and texture such as in the image below: 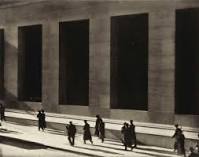 The huge form and shape of the bank building dominates and dwarfs the people walking past.

John Szarkowski’s in The Photographers Eye compared art and photography in 1966 as follows:

“Painting was difficult, expensive, and precious and it recorded what was known to be important. Photography was easy, cheap and ubiquitous, and it recorded anything: shop windows and sod houses and family pets and steam engines and unimportant people. And once made objective and permanent, immortalized in a picture, these trivial things took on importance.” (Szarkowski 1966:7).

Szarkowski in The Photographer’s Eye breaks photography down into five issues: the thing, the detail, the frame, time and the vantage point. He talks about the photographer’s task being to find the invisible picture, to scatter the image with clues and provide a coherent narrative, recording a moment in time and choosing the most appropriate vantage point:

“The photographer edits meaning and patterns of the world through an imaginary frame.”  (Szarkowski 1966:70).

I find the modern approach relevant to my photography and the interest in shape and form compelling. As a photographer working currently in black and white these are important considerations for me.   Whilst, like John Szarkowski I see the photographic image as a window on the world I also see it as a mirror facing in on the photographer.  Szarkowski explains the photographers task as a simple one:

“What shall he include, what shall he reject?  The line of decision between in and out is the picture’s edge. . .

The photograph’s edge defines content.  It isolates unexpected juxtapositions.  By surrounding two facts, it creates a relationship.  The edge of the photograph dissects familiar forms, and shows their unfamiliar fragment.  It creates the shapes that surround objects.  The photographer edits the meanings an patterns of the world through an imaginary frame.” (Szarkowski 1966:70).

My name is Alison Price and for the past ten years I have travelled the world photographing wildlife, including Alaska, Antarctica, Borneo, Botswana, the Canadian Arctic, Kenya, Rwanda, South Africa, Zambia and Zimbabwe.
← Charting the Journey – Following up on Feedback for Sustainable Prospects (Week -3) Seeking Inspiration for my Work in Progress Portfolio - Guy Tal (Week -2) →