National Geographic – A Quintessentially American View of the World? (Week 6) 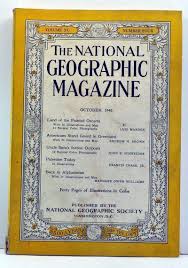 We were asked to look at a case study this week – National Geographic – and consider the main points and arguments made by Andy Grundberg in A Quintessentially American View of the World – an article in the New York Times (18 September 1988) – coinciding with Odyssey: The Art of Photography at National Geographic an exhibition celebrating 100 years of the magazine.

Grundberg begins by acknowledging the significant impact that the National Geographic magazine has had in shaping readers’ perceptions, including his own, of peoples, places and species in the post war era, noting a ten million per month circulation in 1988. However, from Grundberg’s point of view this is not a good thing suggesting that the magazine lacks a critical standpoint and presents the world in a genre of “pictorial iconography” using terms such as “ethnographic pastoral mode” and “the apotheosis of the picturesque” and adjectives such as “rhapsodic, exotic and alluring”. His starting point in relation to National Geographic’s imagery and the organisation is summed up as follows:

“They aim to please the eye, not to rattle it.”

“ . . . they have the capacity to lull us into believing that they are evidence of an impartial sort. Nothing could be further from the truth.” (Grundberg 1988).

Elizabeth Edwards mirrors the concerns of Grundberg in a more specific way:

In another article entitled Decoding National Geographic (1988) he goes on:

“Not only has it (National Geographic) reflected a quintessentially American view of the world throughout our century; it has also created and refined a persuasive and pervasive photographic aesthetic.”

Grundberg’s arguments and issues revolve around the lack of a critical viewpoint, the dominance of the image over text, the limited attempts to inform the viewer and the preference of the postcard/tourist vernacular.   He uses an image by Luis Marden (1946) of an ox cart in Costa Rica as an example, suggesting that whilst it accurately records the painted cart, the accompanying text tells the viewer nothing about life in Costa Rica: 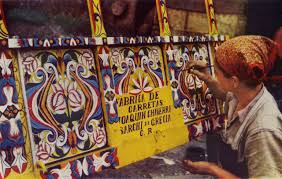 Similarly, it is argued that this image of Red Square, dominated by the pictorial irrelevance of the lemons on the window sill, chooses the pictorial over the evidential: 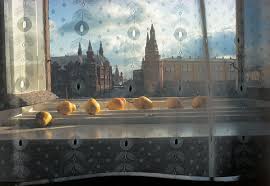 So, Grundberg asserts that the magazine is dominated by a pictorial urge rather than informing the reader about the subject – whether it be a place, people or wildlife:

“The tendency to subjugate the mission of gathering evidence to the demands of pictorial appeal becomes especially obvious in the pictures . . . within the last several years.”  (Grundberg 1988).

Whilst Wilbur Garrett, the editor in 1988, described National Geographic “as holding up to the world our uniquely objective publishing mirror” others consider the magazine acting as a “filter through which the geographical diversity of the rest of the world is represented to us.”

An alternative view is that the yellow borders of National Geographic are in fact reflecting what we already believe and panders to our voyeuristic tendencies as we consume a world we do not know. Images of people from around the world are simply similar to each other and different to us as the viewer. They create and perpetuate a myth. Furthermore, National Geographic’s choice of a good image reflect the prevailing sense of the subject.

Finally, Grundberg criticises the way the exhibition, Odyssey: The Art of Photography at National Geographic was curated and organised. Rather than displaying the images in chronological order to provide a historical record, as Grundberg would have preferred, (presumably so he could draw more evidence for his cause), the images were grouped by subject such as exploration, foreign cultures and scenic vistas.

There is no doubt that National Geographic Magazine is a popular and influential magazine that continues to be loved by many (60 million per month in 2012). Whilst I don’t dispute that their images have a certain super-saturated aesthetic and have generally pursued a picturesque approach that is what the market wants. I defy anybody not to see the quality of this image by Cary Wolinsky: 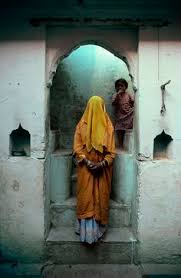 After the wars and during the latter decades of the twentieth century people were hungry to understand and inform themselves about the natural world. This, in turn, fuelled an explosion in the tourist industry and a thirst for travel and experiences that continues today.

Over the years, people have chosen to subscribe to the magazine as one means of researching a subject or place they are interested in visiting or understanding better. That interest will extend beyond one source and they will balance the information from National Geographic with other information available to them. The population as a whole is well aware that tourist companies, for example, will provide the best possible images they can acquire to tempt people to buy holidays and experiences. It is for the individual, as with all purchasing decisions to do their homework.

As far as the imagery of people are concerned I think maybe there is more of an issue. For example, in spite of the magazines commitment to only photograph what is of a ‘kindly nature’ about country or people these front covers show a rather different message and reflect the western view of North Korea, Bolivia and Saudi Arabia at the time:

Issues for my Practice

I am not a fan of supersaturated images or the deeply pictorial genre however I recognise many people are. Nor do I consider myself a landscape photographer. I use the outdoors and the natural world as a metaphor for exploring and understanding my feelings and emotions. I made a conscious decision, when using the beautiful Island of Skye as a vehicle to understand myself better, not to make images in the postcard/tourist vernacular. There are many photographers on Skye that do exactly that, but I wanted to do something different. I am using the landscape as a form of therapy to lay to rest the ghosts of my past photographic career.

National Geographic – Odyssey: The Art of Photography, You Tube

My name is Alison Price and for the past ten years I have travelled the world photographing wildlife, including Alaska, Antarctica, Borneo, Botswana, the Canadian Arctic, Kenya, Rwanda, South Africa, Zambia and Zimbabwe.
← A Sea of Images (Week 6) Getting Ready for the F2F Critique Sessions (Week 6) →