After visiting the Cindy Sherman Exhibition at the National Portrait Gallery recently I popped into the National Gallery to have a look at Turner and Monet’s work as contextual research for my Final Major Project. 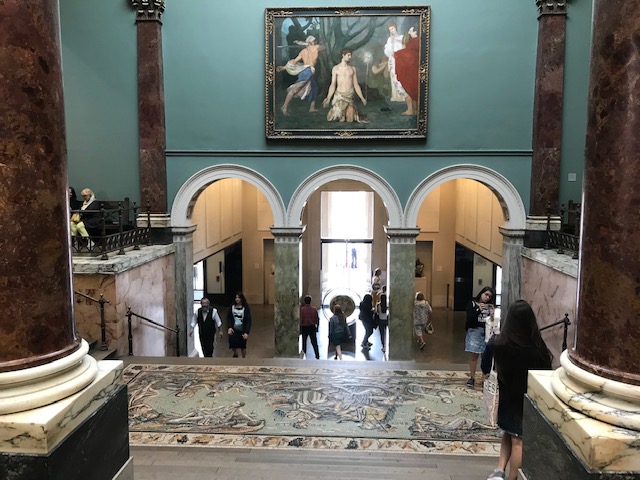 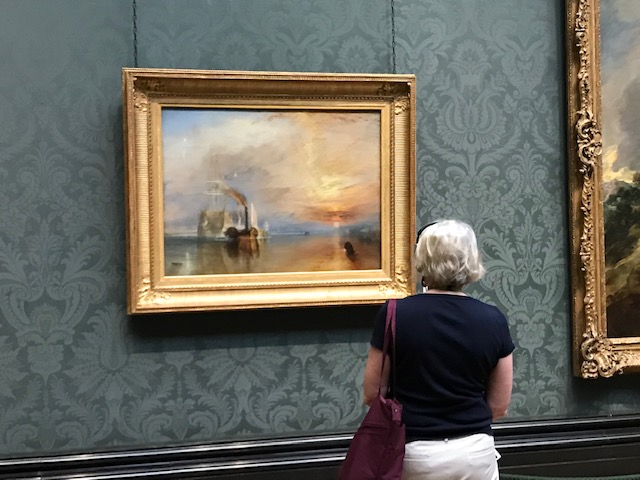 The Fighting Temeraire tugged to her Last Berth to be broken up – J M W Turner, 1838 – The National Gallery 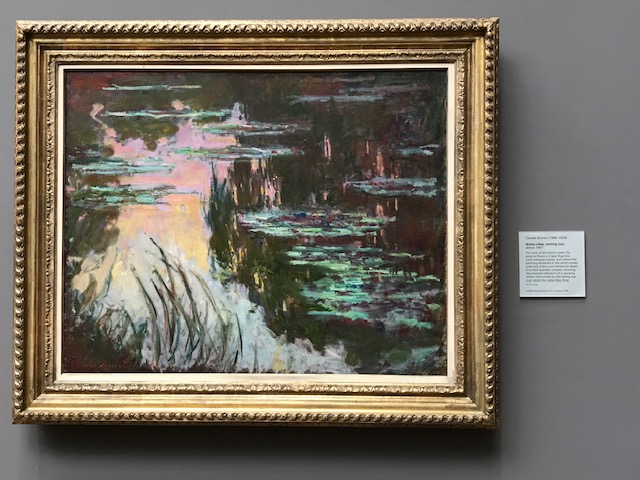 Turner because I love the abstract nature of his work and the sense of freedom from the literal, and Monet’s Water Lilies series as potential inspiration for depicting water lilies in abstract.  As a consequence I have now conducted further research into both painters.

I will return to Turner in another post but I wanted to write about Monet and in particular his series of paintings Grainstacks (1890-91). 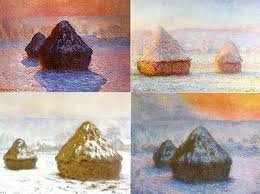 Grainstacks is a series of 25 paintings depicting the stacks in a field behind Giverny.  The intention was to capture a moment in time emphasising sensation over perception.  The paintings were intended to capture nature unfiltered and through an innocent eye.  Monet’s work was painstaking whilst aiming for instantaneity, sometimes only spending a few minutes en plein air before completing the work in his studio.  He explained his intent as follows:

“I’m increasingly obsessed by the need to render what I experience.”

The series traces the scene at different times of day and different seasons and from different viewpoints.  Monet’s Truth to Nature approach is subjectively experiential thus the colours may be more in his mind rather than a literal representation.  Malcolm Andrews contends  that there are different kinds of truth:

“The emotional truth to nature is a subjective truth authenticating sensory experiences which, objectively cannot be verified.”

Thus, a series such as this not only documents natural processes but the perceptual processes of the artist immersed in the motif. 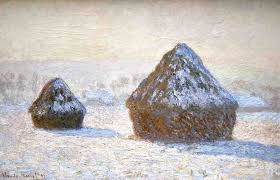 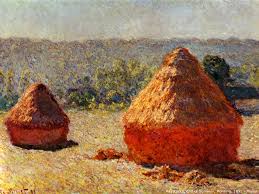 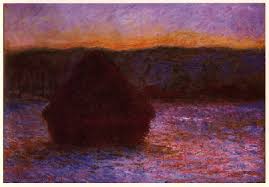 I can see similarities in what Monet was seeking to achieve and my abstract renditions of the Reeds of Loch Cill Chriosd.    I am no longer wishing to record a literal representation of the reeds, the water or the reflections but to convey my experience of the Loch by allowing the real qualities and essence to emerge through abstraction.  I wish to depict the rhythm of the Loch, its patterns, shapes, movement and moods by using my camera as a paintbrush, held loosely in my hands, following the topology of the scene or leaving the natural movement of the reeds or the water to paint its own picture.  Put simply, I am escaping the literal in order to approach the essence.

I never see the same image twice at the Loch and like Monet’s Grainstacks my images emerge as a sensory experience rather than necessarily being an objective view.  Similarly, I am not focused on the subject but my experience on that day for that moment in time when I press the shutter.

My name is Alison Price and for the past ten years I have travelled the world photographing wildlife, including Alaska, Antarctica, Borneo, Botswana, the Canadian Arctic, Kenya, Rwanda, South Africa, Zambia and Zimbabwe.
← Bogged Down in the Reeds! (Week 8) Ori Gersht - Floating World (Week 9) →