I was interested in reading about Tierney Gearon’s response to the critics of her work at the “I am a Camera” exhibition in London in 2001. She faced complaints about the images of her children being a form of child pornography and she was questioned by police, although no charges were brought. In defending herself in the immediate aftermath she made the following comment:

“I looked at my pictures today and tried to see the bad things in them that other people had seen, but I can’t. Some are describing them as pornographic, others are accusing me of exploiting my children’s innocence. I don’t understand how you can see anything but the purity of childhood.”

The reason this is important to me as a photographer, largely focusing on wildlife, is because I have always focused on the animal behaviour I am witnessing and the beauty of the creatures I photograph. I have been rather oblivious to the alternative views that others might have of my pursuit including those who believe that wildlife photographers are as much hunters as those who choose to kill their quarry. This idea was introduced to me early in the course and I was shocked. Furthermore, wildlife photographers might be considered as “gazers” and the animals gazed upon. John Berger’s Why Look at Animals (2009) addressed the inherent power dynamics in viewing animals and Susan Sontag talks about the exploitation of the subject of a photograph.

One perspective that could be levelled at wildlife photographic practice is that wealthy middle class people pay large sums of money to experience and “hunt” wildlife. The only difference is that they shoot with a camera. The money that is generated by this popular type of tourism provides a substantial income to the local people and provides jobs that pay a good wage by local standards. Indeed, the guides that drive the safari trucks are rightly proud to be doing the job and have trained conscientiously to be able to do it.

The conservancies and lodges are often located in ex-colonial parts of the world, such as Kenya and animal hunting formed a large part of our British Imperial past. It could be argued that what is created in the game reserves today is a form of large zoo, that the wildlife ecosystem is disturbed and the wild animal behaviour that would ordinarily exist is changed and compromised.

The conservancies seek to minimise the effect on the animals by managing the number of safari trucks that can cruise the area and that are allowed to witness animal sightings or viewings. However, it is true to say that there is a lot of jostling for position by the safari truck guides and often the guidelines are broken. The guides are encouraged by many of the occupants of the trucks to gain the best vantage point for their guests. They are also encouraged to drive at high speed across the savannah to get to the next sighting. See below safari vehicles at a River Crossing in Kenya: 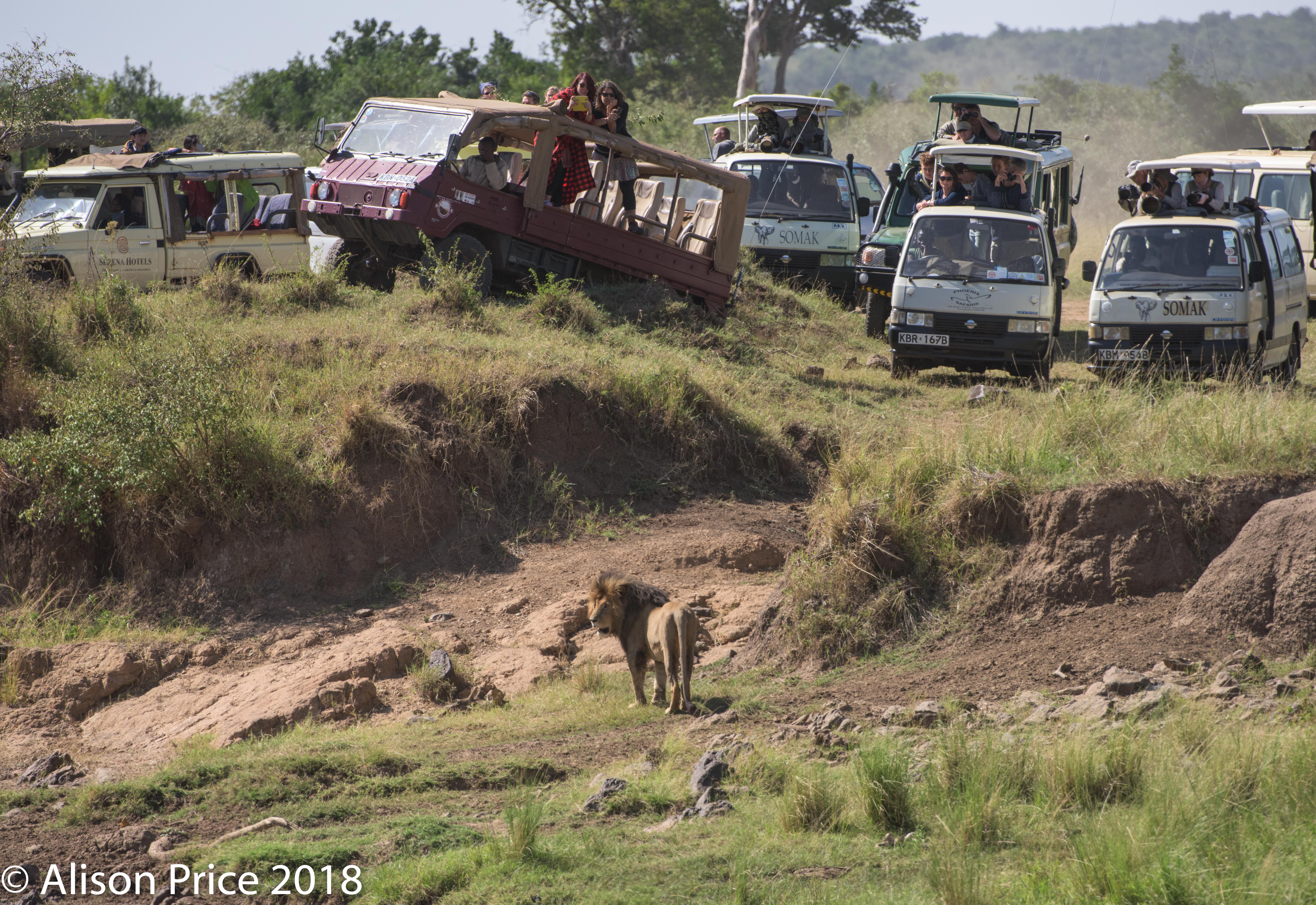 It is also the case that I have witnessed behaviour by safari guides that has clearly impacted on the outcome of a tussle for life between species. During a safari in Kenya we were privileged to see a waterbuck and its baby. See below: 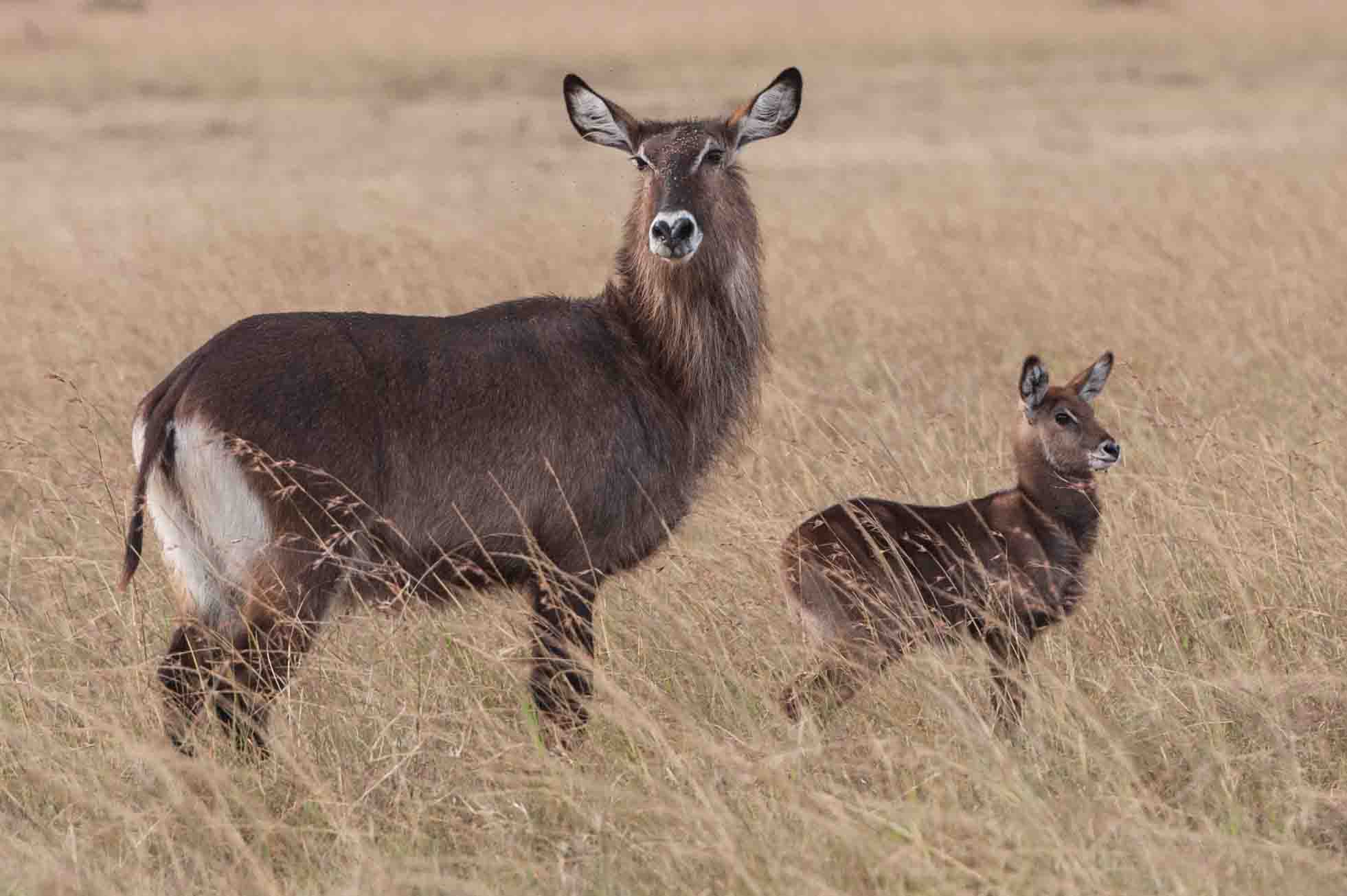 At the time we were trying to find a cheetah that had been thought to be hunting in the area. I remember commenting to my fellow passengers that I hoped the cheetah didn’t find the baby waterbuck.

After following the cheetah for a while we witnessed a kill of a gazelle. Before we had time to draw breath the cheetah starting hunting again and to my horror this time it was the baby waterbuck. The safari trucks closed in on the action and formed a barrier around the kill site. Outside of this circle of trucks stood the waterbuck’s mother crying for her baby. It was very harrowing to watch and she remained there long after her struggling baby had been finally suffocated and eaten by the cheetah. I was left horrified by what I had seen and concerned that had the safari trucks not been there then maybe the mother would have taken on the cheetah and caused it to release her baby. We had, in that sense intervened in the wild life drama and tipped the balance in the favour of the cheetah.

On the other hand, the images captured by wildlife photographers help to inform the philosophical, sociological and cultural debates around conservation and some of the money raised through tourism is ploughed into conservation work. I have visited a game reserve in South Africa a number of times where they breed many at risk animals and seek to re-introduce them into the wild.

In terms of my own practice I have reflected on why I do it. It is out of a sense of wonderment that I seek to capture the beauty of animals and their behaviour. I enjoy sharing my work with others and the travelling that this type of photography involves. I have also undertaken charitable work in Africa where my images were taken with a view to them contributing to a project that aimed to educate and inform local children about the wildlife that it is on their doorstep. As part of the project we visited schools to talk about the animals we had photographed. I have also offered my images to other charitable organisations to help them in their work.

My name is Alison Price and for the past ten years I have travelled the world photographing wildlife, including Alaska, Antarctica, Borneo, Botswana, the Canadian Arctic, Kenya, Rwanda, South Africa, Zambia and Zimbabwe.
← Time to Stand and Stare (Week 9) Developing a New Methodology for Image Making (Week 9) →