Susan Sontag – Regarding the Pain of Others (Week 3)

After the relative success of reading Roland Barthes’ Camera Lucida I decided to tackle Regarding the Pain of Others by Susan Sontag (2004).  I have become interested in this work as contextual research for my Work in Progress Portfolio which is borne out of my time and experiences as a police photographer.  My project is a means of feeling, articulating and conveying my experiences and finding some peace and closure from this part of my life.  I have previously written about Don McCullin and his search for solace in his landscape work.

Sontag starts her essay by exposing the modern world in which we live:

“Being a spectator of calamities taking place in another country is a quintessential modern experience, the cumulative offering by more than a century and a half’s worth of those professional, specialized tourists known as journalists.  Wars are now also living room sights and sounds.  Information about what is happening elsewhere, called ‘news’, features conflict and violence – ‘If it bleeds, it leads’ runs the venerable guideline of tabloids and twenty-four hour headline news shows – to which the response is compassion or indignation, or titillation, or approval, as every misery heaves into view.” (Sontag 2004 :16).

Photographs of the Crimean War and the American Civil War were devoid of combat because of the technical limitations of the camera.  In the First World War, the images were largely aftermath photographs – they were epic in style and tended to be depictions of battlefields and trenches and the ruined French villages that war had passed through.  It was the Spanish Civil War that was the first to be witnessed by a cadre of professional photographers sending their images for immediate publication.

Sontag refers to the staged and controlled environment of conflict photography.  Roger Fenton, for example, was commissioned by the War Office and was under instruction to not photograph the dead or maimed.  As a consequence, his images are a tableau of military life behind the front line.  Years earlier, Alexander Garner and Timothy O’Sullivan had staged their images.  In 1945 the raising of the American flag on Iwo Jima was a reconstruction by Joe Rosenthal.

The Vietnam War was to mark a turning point where there was some certainty that most of the best-known photographs were not staged.

This was in large part due to the fact that the Vietnam War was the first to be televised thus providing additional evidence to the scenes witnessed by the lone photographer.

Sontag speaks of the impact of photographs:

“Something becomes real – to those who are elsewhere following it as ‘news’ – by being photographed.  But a catastrophe that is experienced will often seem eerily like its representation.” (Sontag 2004:19).

Many of us will remember the attack on the World Trade Centre on 11 September 2001 and the haunting images of the aeroplanes moving towards the Twin Towers.  Many who were involved or witnessed the attacks and unfolding drama described the images and experiences as being ‘unreal’, ‘surreal’ and ‘like a movie’.

Each of us mentally stores and recalls hundreds of images.  The photograph provides us with a quick way of capturing and memorising things in a compact form.  It is like a quotation or a proverb.  To remember has become not the act to remember a story but to remember an image.  Sontag speaks of the defining moment when photographs trumped the narrative or spoken word:

“If there was one year when the power of photographs to define, not merely record, the most abominable realities trumped all the complex narratives, surely it was 1945, with the pictures taken in April and early May at Bergen-Belsen, Buchenwald and Dachau in the first days after the camps were liberated, and those taken by Japanese witnesses such as Yosuke Yamahata in the days following the incineration of the populations of Hiroshima and Nagasaki in early August.”  (Sontag 2004 :21/22).

Although, in 1915 Henry James had declared to the New York Times that:

“One finds it in the midst of all this as hard to apply one’s words as to endure one’s thoughts.  The war has used up words, they have weakened, they have deteriorated.”  (James in Sontag 2004:22).

The credentials of the photograph as being objective and a record of the real were espoused by Virginia Woolf:  [Photographs] . . . “are not an argument; they are simply a crude statement of fact addressed to the eye.” However, she goes on to say that: “the eye is connected with the brain; the brain with the nervous system” and as a consequence:

“This sleight of hand allows photographs to be both objective record and personal testimony, both a faithful copy or transcription of an actual moment of reality and an interpretation of that reality – a feat literature has long aspired to but could never attain in this literal sense.”  (Woolf in Sontag 2004:23).

Sontag refers to the photographic image as being a trace but also a selection:

“But the photographic image, even to the extent that it is a trace (not a construction made out of disparate photographic traces), cannot be simply a transparency of something that happened.  It is always the image that someone chose; to photograph is to frame, and to frame is to exclude.”  (Sontag 2004:41).

Although, for the photograph of atrocity the weight of the evidential and witnessing aspect must always outweigh the ‘taint of artistry’ that might imply insincerity.  Indeed, the less polished images were seen to be more authentic.  This was evidenced in the aftermath of 9/11 when an exhibition Here is New York was mounted.  The images were from both amateur and professional photographers and were unattributed and un-captioned.  Visitors were able to purchase prints for $25 with contributions going to support the children of those who died.  The sub-title of the exhibition was ‘A Democracy of Photographs’.

Sontag argues that there is some sense of beauty in battle-scape and other aftermath photography.  She argues that some of the images of the World Trade Centre by photographers such as Gilles Peress, Susan Meiselas and Joel Meyerowitz exemplified this. 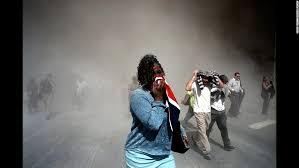 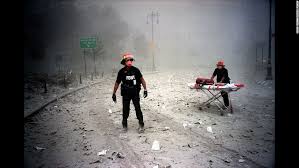 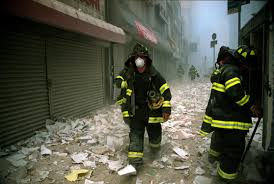 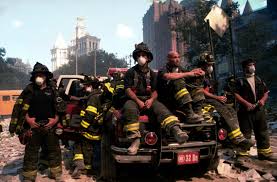 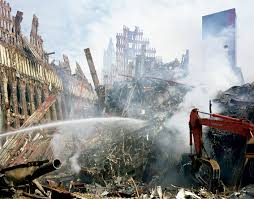 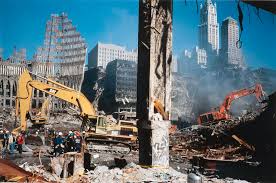 She separates the image of from the subject itself:

“Photographs tend to transform, whatever their subject; and as an image something may be beautiful – or terrifying, or unbearable, or quite bearable – as it is not in real life.” (Sontag 2004:68).

“Beautifying is one classic operation of the camera, and it tends to bleach out a moral response to what is shown.  Uglifying, showing something at its worst, is a more modern function: didactic, it invites an active response.  For photographs to accuse, and possibly to alter conduct, they must shock.”  (Sontag 2004:72).

She argues that repulsive images can also allure.  She cites the slowing down of people to view a horrific car accident as an example of this contradiction.  Human capacity to almost enjoy the suffering of others was something noted by Edmund Burke in 1757 in Origins of Our Ideas of the Sublime and Beautiful:

“I am convinced we have a degree of delight, and that no small one, in the real misfortunes and pains of others.”

William Hazlitt in his assessment of villainy on stage asked:

“Why do we always read the accounts in the newspapers of dreadful fires and shocking murders?  Because, he answers, ‘love of mischief’, love of cruelty, is as natural to human beings as is sympathy.”

Perhaps the most compelling quotation from this book is Sontag recounting her meeting with a woman in Sarajevo in 1993:

“In October 1991 I was here in my nice apartment in peaceful Sarajevo when the Serbs invaded Croatia, and I remember when the evening news showed footage of the destruction of Vukovar, just a couple of hundred miles away.  I thought to myself, “Oh, how horrible” and switched the channel.  . . . It’s normal.  It’s human.  Wherever people feel safe – this was her bitter self-accusing point – they will be indifferent.” (Sontag 2004:89).

Maybe our ongoing exposure to so many shocking images is dulling our senses and capacity to respond?  We live in a society dominated by spectacle.

And finally, her last words in this essay:

“We – this ‘we’ is everyone who has never experienced anything like what they went through – don’t understand.  We don’t get it.  We truly can’t imagine what it was like.  We can’t imagine how dreadful, how terrifying war is; and how normal it becomes.  Can’t understand, can’t imagine.  That’s what every soldier and every journalist and aid worker and independent observer who has put in time under fire and had the luck to elude the death that struck down others nearby, stubbornly feels.  And they are right.”  (Sontag 2004:113).

So, what does this mean for me?

I found this a very interesting read and it helped me reflect on my experiences of aftermath photography whilst working for the police.  Whilst it provided me with a useful historical context and references to a number of conflict photographers, I do not feel it really helped me in understanding my response to the images I saw and the work I did.  I was recently out of university, young and in my first full-time job.  In order to cope with what I was doing, I treated my work and the images I took as a compositional and technical exercise.  I focused on making sure I produced the images required and found a way of taking photographs without considering and dwelling on the aftermath in front of me.

SONTAG, S.  2004. Regarding the Pain of Others. London: Penguin Group.

My name is Alison Price and for the past ten years I have travelled the world photographing wildlife, including Alaska, Antarctica, Borneo, Botswana, the Canadian Arctic, Kenya, Rwanda, South Africa, Zambia and Zimbabwe.
← Trying some ideas on the Road to Elgol (Week 3) Reflections on Informing Contexts (Week 3) →