In recent posts I have discussed the layers of meaning in some of my recent work. Here I would like to delve into deconstruction and the philosophy of Jacques Derrida in particular. 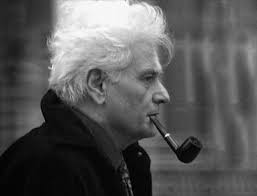 Derrida was a French, post structuralist philosopher, who believed that what might be to others, fixed and self-evident truths, were in fact unstable and precarious – this thinking was a direct challenge to structuralists such as Saussure and Levi-Strauss. Deconstruction is based on system dismantling rather than the structuralist view of system building. In terms of writing Derrida believed that the speaker or writer holds the meaning of a word in the present. If this view is transferred into a photographic context then the photographer holds the key to meaning at the point they press the shutter and subsequent meanings can be inferred however, there is no preference of the meaning determined by the viewer. This is because deconstruction has neither fixed endpoint nor goal – it is an on-going process. Where does this leave Roland Barthes and Death of the Author?

Derrida did not dismiss the author but made the point that he or she might say more than they mean or they may say less. What mattered is what meaning they may have intended, consciously or non-consciously is deferred in the text. What this means is that the text or the image is a system of signs that gather their meaning not from some direct reference to reality or intention but, by reference to other signs in a regress of meaning that imparts an irreducible uncertainty or ambiguity to the text or the image.

“The fall into the abyss of deconstruction inspires us with as much pleasure as fear. We are intoxicated with the prospect of never hitting bottom.”

Gary Rolfe (2004) seeks to unpack deconstruction though a series of references:

So, what does this mean for photographers? If we follow the thinking of Derrida then there are many meanings! However, what it says for me is that as photographers our sense of the meaning of an image is as relevant and important as the critics that might choose to judge our work. The views of the audience or critic are neither more nor less valid. This is important for me as I continue my journey to provide layers of meaning in my work that my audience can use as a means to understand and come to terms with their personal experiences and memories.

Moving forward I would like to develop my practice through using appropriate aspects of the deconstruction process as I work in the landscape. I have already tried to write down the adjectives and feelings that come to mind in my Photographers Sketchbook. I have then challenged myself to come up with the opposites of those words. I am interested in taking this further and will do some more research on the deconstruction process that might inform my future practice.

My name is Alison Price and for the past ten years I have travelled the world photographing wildlife, including Alaska, Antarctica, Borneo, Botswana, the Canadian Arctic, Kenya, Rwanda, South Africa, Zambia and Zimbabwe.
← Reflections on Adding Words to my Imagery (Week 12) Thinking about my Social Media Presence (Week 12) →